If you are bringing you Nyheim character to Chernarus, please review this page 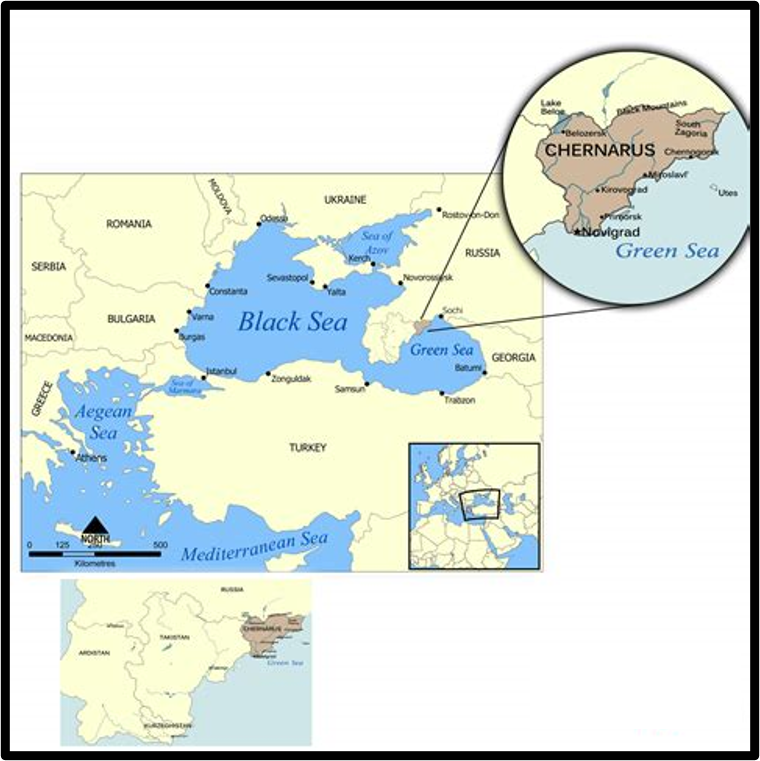 To the East of Black Sea and to the north ends of the Green Sea lies South Zagoria, one of the three regions of the Republic of Chernarus, a land home to a tumultuous history ripe with bloodshed, war, and political strife.

The capital of the region is centered around Novigrad and has a population (at its peak) of 3.9 Million, making it home to a majority of Russians and Chernarussians. Within Chernarus, the official languages are Chernarussian and Russian. To the north of Chernarus over the Black Mountains lies mainland Russia, and to the west of Chernarus are the desert-like lands of Takistan. Both nations have had their part in the construction of Chernarus' history throughout its development.. The Green Sea lines it’s East Coast, allowing port access and trade to flow into the country.

Chernarus was among one of the former client states of the Soviet Union that achieved its independence in 1991. After many years of attempting to align itself with the West, in early September of 2009, tensions between the Chernarussian Republic and the Ethnic Russian Separatist group known as the  Chernarussian Movement of the Red Star, often simply titled ChDKZ or phonetically known as Chedaki, saw a resurgence in violent activity. While the Chedaki had always had a presence in Chernarus, especially after the fall of the Soviet Union, it wasn’t until the catalyst of the apprehension of their commander Gregori Lopotev who pushed a violent uprising against the Chernarussian government turning into what is known historically as Chernarussian Civil war between both of the ethnic groups with the intent to forming a Pro-Russian Socialist Soviet Government under the Russian Sphere of Influence. While short (1st of September 2009 - 13th of January 2010) the war was a violent and bloody one, with both ends committing horrible crimes against humanity which gained international media attention and foreign intervention both from NATO and Russian forces. The war itself was seemingly thought to escalate further until NATO forces backed out and Russia fully committed to protecting their fellow ethnic brothers, ending in a clear victory for the ChDKZ which helped to lay the foundations of the Chernarussian Socialist Republic (CSR).

With the civil war now won and with the arrests of Military leaders and Politicians underway, the dissolvement of the Government took place with the Support of the Russian Federation Gregori Lopotev who was instated as the new President of the Newly formed CSR. Organizations such as NAPA were internationally recognized as terror organizations due to factors such as the Moscow bombing which resulted in their leader's arrest, causing major disarmament and imprisonment. The Chernarussian Defence Force (CDF) also had many of its leaders arrested resulting in the disbandment of the army and the installation of the new army (Armed Forces of the Republic of Chernarus (AFRC) under the former ChDKZ commanders Loyal to Lopotev.

Over the next few years, the regime under Lopotev implemented drastic changes in the country and its structure. Changes that not everyone was happy with. While Lopotev proved to be a strong leader he made many enemies due to his radical choices. Rumors of underground organizations with the goal to bring Lopotev to fall began to surface. Eventually it seemed as though they succeeded, with Lopotev assassination on the 18th of January 2016 by a young nationalist within the ranks of the Chernarus Liberation Front (CLF).

With Lopotevs death, a new leader for the country was initiated on 27. April 2016 - pro-Russian loyalist Ivan Bernarus. Keeping some of the changes implemented by Lopotev and continuing to work closely with Russia, the country underwent further development. Eventually the path was cleared for a Referendum to take place - with the aim to have Chernarus be integrated fully into the Russian Federation. However, due to the outbreak, they were unable to raise the Russian flag on Chernarussian ground.

When cases of AVM-FLA-19 first broke out in 2019, many elderly, immunocompromised, and youth fell victim to the infection as the healthcare and hospitals were strained. To try and counter its rapid spread, emergency pop-up and field hospitals were deployed by the government in high populated areas to help and deal with the influx of those affected. The Government of Chernarus detailed that her and her people were fully aware of the rapid onset of the situation and despite the tumultuous events, everything was tightly under control. Life continued on as normal as possible - even releasing those that do not need intensive care back into the populace to help bolster the economy and defense.

The infection started a rapid spread throughout the region. The situation deteriorated rapidly. More extensive measurements were taken involving the closure of many stores, non-vital, or nonessential jobs and labor were placed on hold. Quarantine was initiated alongside a heavy police presence to ensure the populace followed government mandates. As time passed, military detachments were dispatched to various towns and cities, making sure to enforce curfews and regulations. Armed military roadblocks were quickly set up to restrict access and monitor those who were attempting to leave or enter quarantine zones. All travel countrywide ceased, except for some European foreigners, many travelers were not permitted to depart from the country in fear of spreading the infection or misinformation regarding Chernarus’ control of the situation. However, it would not take long before the borders closed down completely, leaving many foreigners stranded in the region. The refusal to allow individuals to leave and the overwhelming stress on the populace both native and foreign cited an increased sense of restlessness and unease. A general lack of communication from the government, the forced armed lock-downs, roadblocks, and quarantines alongside the lack of appropriate access to aid and information regarding the state of the region and its people culminated in a fear that led to a rise in tension among many different factions within the country both domestic and foreign.

Chernarussian nationalistic groups saw an opportunity throughout the chaos and took it. They attacked pro-Russian forces at roadblocks, military camps, and governmental buildings. Due to the outbreak, Russia was unable to provide steady funding to its supported forces within Chernarus, allowing some nationalistic groups to regain power in certain regions. However, this was short-lived.

In August of 2020, as the virus began to ramp up in force throughout the nation, Russia saw an opportunity it couldn’t help but to take. As citizens were kept to their homes, the Baltic Fleet was dispatched to form a naval blockade surrounding the coastline of Novigrad. Meanwhile, the 36th Combined Arms Army was airlifted into Chernarus, dropping between Novigrad and Primorsk. On August 27th, 2020, Novigrad was stormed and taken, the Russian flag flying high from the Capitol building. The remaining underground CDF Soldiers fought valiantly against the invading forces as they spread through the remainder of Chernarus, but ultimately failed to push them back and have since gone underground resorting to intermittent skirmishes to disrupt Russian operations within the region. Minor militias have popped up from revolting Chernarussian citizens, with their occasional successful pushes ending in short-lived victories as Russian forces respond to quell the uprisings.

In September of 2021, Chernogorsk was the only city to be gassed with the aerosolized inoculation due to heavily established Russian blockades making the remainder of Chernarus impassable. However, the aggressive infected individuals that arose from the gassing made quick work of uninfected individuals in Chernogorsk, and have started spreading the AVM-FLA-21NS variant across the Chernarus.

Following the spread of infected individuals across Chernarus, some Russian Forces were withdrawn back to the Russian mainland. Government and healthcare organizations began to collapse as people attempted to fend for themselves. Small survivor camps began to appear across the region with groups of people attempting to help one another. On 14 May, 2022, a group of helicopters arrived from Nyheim, with individuals claiming they were there for a vaccine. However, the locals knew nothing of this supposed vaccine.