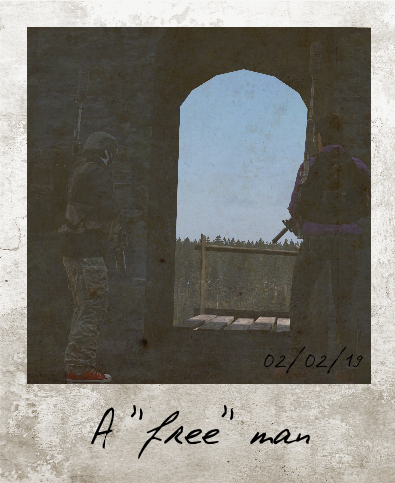 "Well, it's been a while since I wrote in here. Reason being simply that hardly anything has happened in the last couple of weeks. But I can tell you now that the longer nothing happens, the harder it hits you when it does.

I've ran into a new group around these parts yesterday. They call themselves the Freemen. From what they told me, they had to spend the winter up over the Black Mountains in Russia. And from what I hear, these guys sure are glad to still be alive. The winter wasn't so kind to most of them. However, the remainings guys I met were a breath of fresh air for me. Not only because it's rare to find so many friendly faces at once but also to see friendly faces at all now. I suppose that's just me though. How did that song go again? 'Iiiiiisolation... is not good for me.' Yeah... amen to that.

Since they have never stepped foot into South Zagoria, I was their tour guide so to speak. Showed them around, got them a lay of the land, told them what to watch out for, all that jazz. I gladly helped those folks out. Any group that doesn't intend on blowing my head clean off the first chance they get, I gladly help out. Plus they promised me shelter and a hot meal if I decide to stick around. And that certainly isn't something I'm gonna turn down. Plus, they have daily service which was very nice. I might be an agnostic but the encouraging words from Father Eric really help. I guess I felt a sense of hope in me I haven't for quite some time. It helps. It really does, even if it's just some guy talking and quoting the bible in the end. It does help.

But not only that does. I think just being around people who I can trust is very relaxing for a change. I don't have to stalk people and evaluate them based on their behavior for a while before actually talking to someone. Now I can just walk up to someone I know and boom. I just hope that my curse of never seeing people again after meeting them doesn't work for so many people at once... oh well, time will tell I suppose. But it feels good. Real good to have people around me again. Things are looking up, very much so."