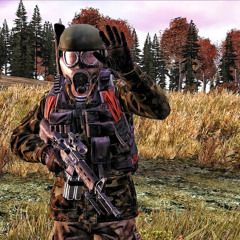 Alongside his cousin Joe Pecker, Harris took part in their Motorcycles Club trip over the coastal regions of Sweden and Norway towards Finland in order to join the festival, the 1%er club, that Harris and Joe's Club were a supporter club to, hosted.
The entourage took a last stop in Nyheim before finishing their trip towards the festival in Finland.
On this night, the pandemic broke out.
While his cousin is addicted to alcohol and Meth, Harris is obsessed with Military gear. Heavy weaponry especially. He served a year of military duty at the age of 19 but didn't like the drill. In Nyheim, he can fully go after his passion of guns and loves to discover abandoned military places for chances of potential guns for his collection.
Most members of Harris' MC went straight back to their families with the very first outbreak of the pandemic. Joe and Harris however decided to stick with Nyheim as they were fascinated by the rural places around the City and had nothing to go back to in Germany.
When the Virus turned to what it is today, the duo got rid of their Harleys pretty quickly, as loud motorcycles aren't exactly the best way of Transport in these times. However, Harris' knowledge around engines came in handy more than once ever since then.