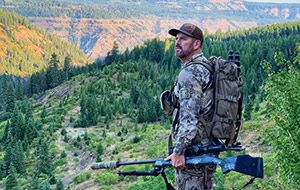 J was born on the west coast of the US in 1994. He lived a fairly normal life and always enjoyed the outdoors. Hunting, fishing and camping were his biggest interests. In high school he played football and applied himself in his studies. In 2012 J was accepted into university to study engineering. J dropped out in the first semester after his fiancé became pregnant. J joined the US Navy to support his growing family in 2013.

J worked in engineering aboard US air craft carriers, completing two deployments to the Arabian Gulf. During his service, J became a bit obsessed with firearms and survival training. He never participated in anything official beyond a few live fire exercises off the fantail of the carrier, but he began collecting firearms and survival literature in late 2016. In early 2020 J took leave to visit some old family members in Kiev, Ukraine.

Leaving his wife and daughter back in the states, J planned to visit some extended family outside of Kiev. He only planned to spend two weeks in the country. Following the uptick of cases and the US travel ban, J was stuck in Kiev. After contacting the closest military instillation for a Space A Flight back to Norfolk, VA, J was ordered to move west and muster with U.S. Army Garrison Wiesbaden.

J arrived at the USAG just before the major groups there split out. Having very little in common with the 2nd Cav, J worked with the Army Corps of Engineers attached there. As the last flights out of the USAG were canceled, J settled in for the long haul. As communication between J and his family grew ever more infrequent, J threw himself into work. J used the engineering skills from the Navy to help optimize the power generation at Wiesbaden. After the call from Oslo came through, he was one of the few engineers taken to the airport to help keep things moving.

The airport was an absolute nightmare, at least from a power generation standpoint. J never did learn what source was initially powering the grid there, but was happy to switch to a stable line of diesel generators that the Army had supplied. The newfound stability did not last however, the massive influx of refugees and the aging systems at the airport began to cause problems. As fuel shipments dwindled rolling brownouts of the airports facilities became the norm. In late October the main diesel ran silent. Requiring multiple parts for a complex repair, J and a few others moved north towards an old supply depot to gather the parts. As they finished loading replacement machinery onto a flatbed truck, they heard the radio call. The small group scrambled up to the highest point they could and watched as thick black smoke rose from the direction of the airport.

After watching the flames die down from the airport, the group decided to move towards Rena to meet up with the survivors. Rena was a place of good intentions. That is all that was good about it. It was small, cramped, and worst of all dark. Even if there was enough fuel to run the generators, there weren't enough lights to make it worth the cost. Most of the food stores had been depleted by the time the last straggling survivors arrived and after a few months of starvation rations, J left Rena in the night. J fled north, hoping to find a way back to the family he hadn't spoken to in months.