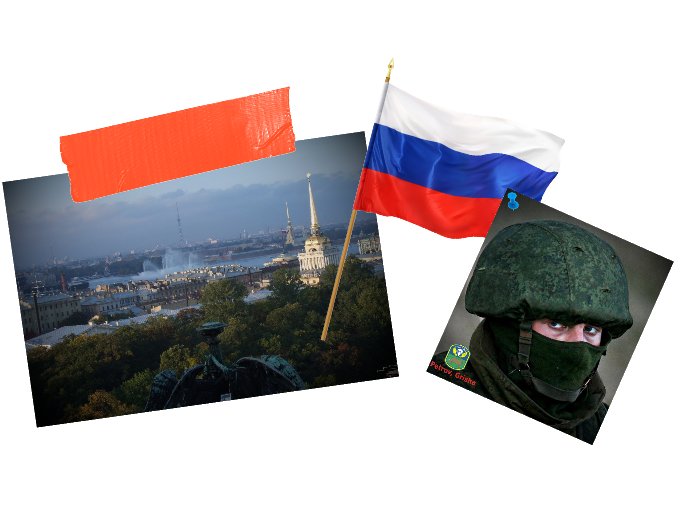 Growing up in St. Petersburg, Russia, Grisha joined the Armed Forces after serving his mandatory service time. His story and journey into South Zagoria begins at the outbreak of the infection and its spread north.

The APC hatch opened and Grisha stepped out on to the pavement followed by his first squad. The evening sun was masked by smoke billowing from nearby ruins and the air was thick with the noxious stench of a dying city. He was on the outskirts of Sochi, Russia and these would be the closing days of his military career. The total carnage brought on by the Infection had taken its toll on his fighting spirit and in recent weeks he had been devising a plan to escape the collapsing frontline. His commanding officer; a brutal and uncompromising overseer to his subordinates, was accompanying the forward element to survey the terrain for another blocking position. This man was all that stood between Grisha's platoon and escape from the approaching hordes. It was at this moment that he knew he would be called upon by fate to kill or be killed.

It had been a long road to this moment. At the outbreak the morale in the ranks was unbreakable and a quick resolution seemed inevitable but as days turned to weeks fear and uncertainty slowly eroded their resolve. Rumours had been circulating that the infection had broken the quarantine and was spreading deeper and deeper into Russian territory, thus instilling a uneasy atmosphere throughout the Task Force. Grisha, being a family man with a wife and daughter whom he fought for and loved dearly, was not prepared to take the risk of being absent and subsequently helpless whilst his family was taken from him. Following his initial deployment to the front when the cities just south of the border began to fall Grisha made a telephone call to his wife, urging her to travel closer to where he was operating and stay with the family of one his men. Grisha’s first plan was to slip away from his post, find a way home and weather the storm but he was constantly reminded of the duty he had to the troops under his command, the brotherhood they had formed over the years. He knew that leaving them to the infected would haunt him for the rest of his days.

As Grisha approached the command vehicle he signalled to the men stood at the rear of the APC’s. The loud abrupt roar of an engine start caught the attention of the Officer who glanced up at Grisha. “What is it Petrov?, Pyotr giving you trouble again?” the officer spoke harshly, “No sir, the trouble is not with Pyotr today” Grisha replied sternly. Grisha looked to the side of the officer at the guard who shadowed him, for a moment they locked gaze and then, reluctantly, he nodded and advanced. “Whats going on here? , Petrov what is this?!” he raised his voice as the soldier began detaining him. After a short scuffle the officer broke free and unsheathed a knife “This again eh?......Don’t you understand!? You fool, we are the last line of defence here” The officer, slightly out of breath exclaimed. Grisha drew a pistol from his belt, facing it towards the officer in response “Respectfully, I am taking my troops and leaving this hell hole….stand down…..Sir”, for a moment it seemed the officer would agree and allow him to depart but just as Grisha began to lower his weapon the officer lunged towards them with his blade. In a mere split second the situation turned deadly and a round from the barrel of Grisha's pistol ended any peaceful resolution to the quarrel.

Looking down at the lifeless body of the officer, he cursed under his breath and glanced at his hand as blood escaped from an open wound inflicted by the officer. The guard, now wide eyed in horror, stared up at Grisha and again they exchanged looks in tense silence. Out of the corner of his vision he noticed the guard reach for his sidearm. Fully aware of his intentions and the repercussions of fratricide, Grisha had no choice but to stand his ground. The seconds dragged as the standoff continued and then without warning, just as the guards hand finally made it to his holster, Grisha let out a short sigh and squeezed the trigger. The hit should have been fatal but instead the guard cried out as he fell to the ground and begun rolling around in agony, still clinging to life. Once more Grisha discharged his firearm and ended the suffering, he grimaced as blood splashed up onto his fatigues. A couple of minutes passed as he remained still, observing his work, his face awash with a blank expression. Suddenly he turned and walked back down the path to the waiting men “Make ready column! We are going home” he shouted to the lead vehicle, there was no cheer or reaction from the men, only the sound of boots echoed down the street as they loaded into the APC’s and began their journey to the rendezvous.

The column approached the point at which Grisha had agreed to meet the families, only two APC’s and a large military truck remained, of which the rest had either left to join their own families or had returned to the Company Command. Grisha stood up from the commanders hatch in the lead vehicle and took out his binoculars to scan ahead, he soon caught sight of a woman waving a blue shirt on the side of the road. It was just as he had planned and after turning off into an isolated farm stead the men were reunited with their families once again. That night the troops and their families camped at the collection of houses and it seemed as though the plan that Grisha and his men had strive towards would see them through this nightmare. Food was plentiful and there where a collection of fields for cultivating, but even with the possibility of long lasting safety the morale of the men remained at an all time low. The ominous sound of distant battle as well as the low thunder of helicopters could be heard frequently throughout the night and nobody, not even the families had received word from the surrounding area. Grisha fell asleep with a deep sense of uncertainty, had he made the right decision? The guard was but a young boy who was only following orders and what he believed to be right, only time would tell if the sacrifice had been in vain.

As the morning sun seeped through the curtains Grisha was stirred from his sleep by a ruckus outside the window, as he raced outside to arm himself he could hear the heavy thuds of rifle fire and the accompanying screaming from what he assumed were the families of his men. When he opened the farm house door his worst fears were realised, the infected had overrun the perimeter and where running a muck in the compound. Laid on the floor at his feet were the shredded remains of a child whom he recognised, he quickly turned and shouted inside to his wife and child to run to the trucks. “Mount up!” he yelled at the top of his voice to his men. Chaos ensued as the remaining survivors scrambled to safety. By the time they made away to the roads they had lost near a third of the party and an abundance of important supplies.

No longer was hunkering down north of the border an option as it was clear the infected had domain over the towns, cities and countryside north of the border. It was at this point that crossing south into Chernarus came into question. The thought initially came from the wife of one of the men who claimed to have relatives near the southeast coast to the green sea, she alleged that it would be safer to cross into less populated areas of the region and make a permanent camp away from the larger cities. With the memory of Sochi and the broken reports of complete anarchy around built-up areas still fresh in his mind Grisha agreed and within hours he dispatched scouts to begin searching the surrounding terrain for a new home. On the second day of the search he received news of a soviet-era bunker nestled deep in the forests of the Black Mountains, it was reported to be an old listening post complex with strong hermetic doors protecting its entrance. To Grisha it the was perfect diamond in the rough he had hoped for and after salvaging what parts he could from the APC and loading them onto the other vehicles the group set out and crossed the border into the neighbouring South Zagoria region.

On arrival Grisha wasted no time in refurbishing the complex, using supplies from nearby small towns and villages, some men created makeshift fortifications to bolster the interior structure whilst others set to work on plugging any gaps in the outer walls. The decades old age of the bunker was no deterrent to Grisha as he planned its defences. Using the corridors and tight passages he set up overlapping fields of fire, traps and predetermined kill lanes to maximise their chances should an attack ever take place. In the very heart of the bunker where the staff quarters and other purpose rooms were located he made various renovations and created improvised bedrooms and apartments for the separate families.

Even after such a stroke of luck there were still some resources that could not be found or sustained from the nearby area, food for instance was predicted to run out eventually regardless of rationing as well as ammunition for guns and fuel for the portable generators powering certain areas of the bunker. Whether Grisha liked the current situation or not the responsibility fell upon him to find a new way to provide for the people he now led. Following a meeting of the community it was decided that he would take the strongest and most capable fighters south and scout the rest of the region in the hopes of finding an answer to the most pressing concerns.