My name is Alexei Kuznetsov. I am 34 years old and from Russia. I grew up in a small town called Volgograd. I went to school and studied. When studying, I learn basic English and Chernarussian. My parents are called Pasternak and Dimitri. They were very smart. They wanted to me to study further education and become a carpenter. I did not want too. When growing up, I got bullied from the bigger children and started to learn how to fight. When I was 17, I ran away from home and joined a organisation called “Chedaki” which is a socialist group.

With this group, they did not think I was old enough to go to the front lines. Instead, I assisted a man by the name of Nikolai transported small weapons and explosives. We would export the weapons from Russia into South Zagoria. Nikolai was an old man and could not work his body like I could. After a few years, I took his job and became one of the main movers in the ChDKZ.

I did not get to assist on the front lines against the CDF, but I was able to provide weapons and munitions I obtained from a contact in Russia. Sometimes I would sleep in South Zagoria if I arrived late, or I would sleep just north of the black mountains. One night, I had to stay in Zelengorsk due to my contact bailing out. I thought “Cyka, I’m going to drink.” I went out into the streets with my dark skinny jeans and black hoodie and went to the “big club” as the locals called it.

I mainly sat at the bar for most of the night drinking straight vodka shots. After around 10 shots, I stood up and it hit me hard. I faceplanted the floor. When I slowly came to consciousness, I just saw flicking red and green lights. Past the lights, I saw a stunning blonde girl. She leaned down and put her arm around her laughing. I stumbled to my feet clinging to her, and we walked back to the bar.

When I sober up, I noticed the girl had a beautiful owl tattoo on her arm. I complimented her and put forward my appeal towards tattoos. She mentioned that she was an actual artist to which I showed great interest in. She gave me her number which I wrote down the back of my hand, along with the name Hanna. We kissed a lot.

The next morning, I woke up on a crap covered floor of someone’s apartment. I pulled myself up, walking to the breakfast bar to make a coffee, realising about the girl I met last night. I quickly glanced at my hand to see the drunk handwriting being impossible to be read. When I actually came to my senses, I glanced back to the bed to notice her sleeping there. I sighed with relief, and poured two coffees.

We went around to her parlour when she agreed to do my tattoo. I gave her a few ideas, and she sketched something up. Without seeing the sketch, I told her to go ahead. I trusted this girl to have the artistic mindset of putting something beautiful on my body. I stretched my arm out, and she went ahead pressing the needle against my soft skin.
Afterwards, she said the price of 2200 rubles. I just smirked and gave her 30000. She was astonished. I wanted to tell her how I earned it, but I could not scare her away. It took just over half a year to tell her.

I told her that I smuggled weapons into the country. I did not tell her whom for, I told her I did not know. The Chedaki had the worst reputation in Chernarus and I did not want to risk that. I offered to her a business proposal. She owned a tattoo parlour, she could also deal weaponry under the table. She slapped me and sent me out the store. I just walked out with my head down not saying a word. I was worried this girl would go to the local police. That would have fucked my entire operation up and I would have had to flee. I was bound by oath not to tell anyone of my business. I spent the rest of the day in my apartment thinking about what to do.

After a few days, I received a SMS message from Hana. She was very mysterious and blunt, but she asked me to meet up in one of the coffee shops just out of town from Zelengorsk near Drozinho. I reluctantly agreed. Upon arriving, I saw her sitting down with 2 coffees, 1 had cream which was hers, the other without. I walked up to the silk covered table and sat down. She looked at me and said 2 words.

For the first few months, it worked great. We continued our relationship and slept with each other a lot, and she resumed selling guns to clients who needed them, mostly rebels. There was one week I had to leave to go back to Russia to meet with the boss to give an analysis of how the operation had been going. Upon arriving back, I was met with a phone call from Hanna. She was in tears and trembling. One of my clients had been captured by the police and forced to wear a wire. She was caught.

"I will not give up your name, ever."

I had an unbearable amount of guilt in me. I walked past her parlour to see locked up doors and wood in the windows. I always told her I’d wait for her.

A year passed and she was released. She walked out those gates wearing the same clothes as the day I last saw her, and I gave her the biggest hug. I am not an affectionate person, but she meant everything to me. Upon arriving home, we run into some disturbing news…

You if you get on the wrong side of me 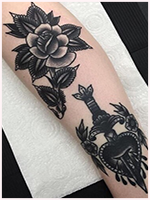 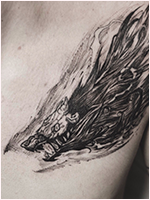