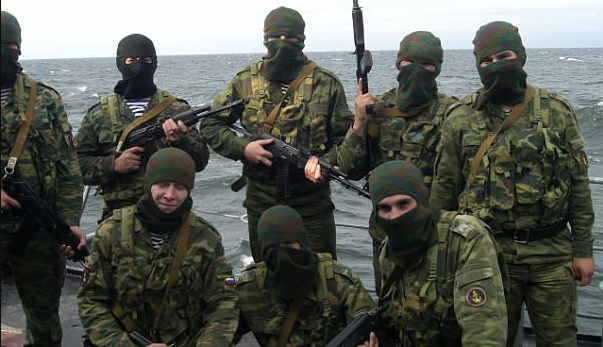 "Matej and his squad posing at a naval base connected to the Green Sea."

After his 16th birthday this point most of his life changed for the better, he got the respect he demanded and his mother even found a new boyfriend, giving him the option to focus on his own future for a change. When he finished school he decided to enlist in the CDF, since fighting was the only thing he was good at. He fought in both the civil war as well as in the Takistan conflicts. He loved his time in the CDF, a place he finally could prove his worth. He joined a Marine Battalion and his first deployment threw him right in the Civil War. Through numerous drills his former rebellious attitude got broken down the hard way, turning him into a soldier. His first combat experience changed him greatly, realizing that his blind anger will get him killed quickly. He learned to control his emotions and to follow the lead of more experienced people, swallowing his pride.

In 2014 he joined the operations in Takistan, now holding the rank of Designated Marksman. A few years, operations and a divorce later he decided it was his time to leave the forces, having seen enough pain a death. He was discharged honorably and returned to his home city Belozersk, reconnecting with old friends as well as his mother. What should have been a happy time for him turned out to be a lot worse than expected when he learned of his mother being abused by her now husband.

"Matej turning to alcohol and violence after taking his leave from the CDF."

Matej was now more than ever used to solve problems through violence and before his mother could even give her opinion he was sitting in his car driving to her husband's workplace. After an argument, a fight ensued and before anyone knew what has happened his mother received a divorce letter. Once again it was proven to Matej that violence can indeed be a solution to his problems. He couldn't help himself but feel a void now that he worked a regular job at a lumber mill. He missed the brotherhood that can only grow in combat and he saw day after day that all his strength wasn't worth anything in his civilian life. It didn't take long for him to turn to the bottle once depression took a hold of him.

He was put in a downward spiral and his mother had to watch as he slowly lost his job, his flat and his hope for the future. In a desperate attempt to help him she called another veteran called Ilya asking him for help. Ilya was able to help Mat, taking him on hunting trips with other veterans or just to the shooting range. He was able to control his drinking problem and later started working at a bar. Life wasn't perfect but it was as good as he could hope for at the moment.

One night he received a text from Ilya. The message said, "I need someone to pick me up, I'm at my girlfriend's place." Not thinking twice Mat started driving and picked his brother up. He didn't think much of it until the police took him in for questioning the next day. Apparently, his buddies girlfriend was murdered and raped just before he picked him up. No matter how much he denied it just looked too much as if he was the getaway driver for a fellow veteran. His violent past didn't do him any favors in court and he was stripped of both freedom and pride. 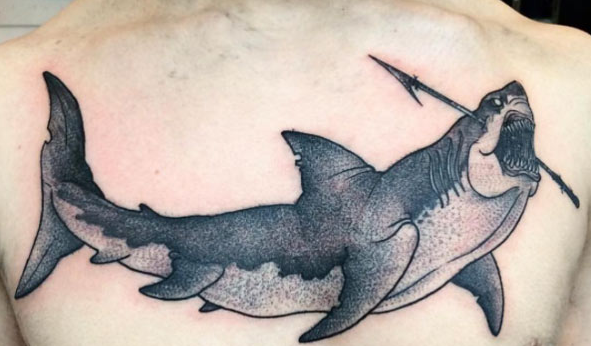 "The tattoo Mat received when he became Underboss of the Riffs."

Furious of what has happened to him all he could think of in prison was to pay back his treacherous friend and take back his pride that was until he met a man called Carlo Vivani. Carlo was a criminal just like all the others but at least he still kept to his own moral code. Since day one Mat knew that he would be better off with others protecting him but no one he met he would have trusted. The two teamed up and a few weeks later they developed into one of the larger gangs in the prison. Even though Mat had problems with crimes before prison, the system failed him and so he had no problem taking things into his own hands.

It took a while until people inside the prison realized that something was wrong but after a while, the smaller meals, the lack of calls from the outside world and the dwindling number of guards caught their attention. They knew something was wrong and this was their chance to finally get the hell out of this place and so the riot started. It didn't take long and the mob of angry prisoners fought their way through the last remaining guards, killing all of them. The Riffs decided to get out as fast as the could and so they set out for the mainland.

"Matej shooting two prison guards during their escape, both of them trying to make his life hard during his stay."

Once the Riffs hit the shore they made camp in the nearby woods for the next few days to recover from the last days. During the next days, it was decided that everything that's to come would be a new chapter in their lives. Everyone agreed, eager to forget about their time in prison. After that they finally decided to explore the wasteland, making friends, killing enemies and recruiting new people they would meet.