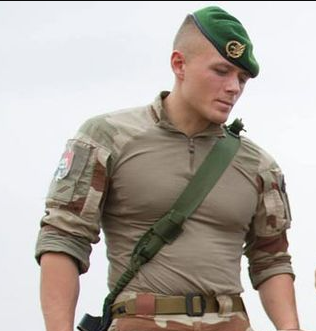 
Valesh Legion was born in 1988 under the name Thomas Desmet. He grew up in a traditional family and enjoyed a strict but righteous upbringing. During his teenage years, it became clear that Valesh had a strong desire for freedom and autonomy. The right to make his own choices caused him to become a rebel and oppose government interference at an early age. The capitalist and democratic system failed in his eyes and the power should lie with the people and not with those in power. From the age of 16 (2004) he participated in several demonstrations against the government system and the oppression of the people. At the age of 18 (2006) he joined the extreme leftist movement that fought for the total freedom of the people and against the oppression that the government stood for. The goal was to overthrow the government and install a people's republic.
When Valesh was 24 years old (2012), he participated in a violent demonstration against the fascist movement that was gaining momentum in his home country. During this demonstration, the situation escalated completely. The police did not intervene, which at the time was seen as a plot by the government to put the 2 groups in a bad light, and there were several deaths and injuries.
In the days following the demonstration, the government allowed a law to be voted that excluded both extremist groups from society. The members were labeled state enemies and were to be arrested and imprisoned immediately.


When Valesh and his comrades heard this news they decided to go into hiding and flee abroad. Thanks to the help of their network they managed to stay out of the hands of the government and in 2013 (at the age of 25) they reached the French commune of Aubagne just outside the French city of Marseille. In this commune was the headquarters of the French Foreign Legion.
Valesh stayed in hiding in the town for 6 months but through infiltrated comrades from Belgium he learned that the government was on his trail. He was also considered one of the instigators of the violent demonstration that took place 18 months ago. Valesh knew that if he were caught, he would be imprisoned for years.
On impulse and in fear of government retaliation, he decided to join the French Foreign Legion. The Legion was known for giving everyone a 2nd chance. Regardless of origin or deeds. In addition, as a legionnaire you also received a different name and all your data and history were left behind. Legally, the Legion no longer admitted fugitives but it was generally known that they maintained the centuries-old tradition of admitting fugitives to their ranks unnoticed.


It was then, upon joining the Legion that he decided to adopt the name Valesh Legion and leave his birth name behind forever and ever. At that time (2014), Valesh had just turned 26 years old. He joining the legion came with the responsibility and agreement that it was for at least 5 years.
The training was hard, legionnaires were seen as the elite corps of the French army. There was a rock-hard discipline that all members had to comply with. This was necessary because everyone who joined the Legion had little or no military background. As a result, the soldiers of the Legion form an enormously disciplined and trained army. They are extremely tough mercenaries who were only used by the French army on the toughest missions.


Valesh joins the legion with the parachute unit and is used in various military operations. He fights rebels in the south of Africa, takes part in various battles in and against the Islamic State and several secret missions against dictators and oppressors follow. Valesh is wounded several times and literally stares death in the eye in Iraq when his unit comes under heavy fire during an ambush by extremists. During this fight, through courage and self-sacrifice, he manages to organize an evacuation of not only his comrades but also of countless civilians.
Valesh creates a furor during his time with the legion and rises rapidly in their ranks. He reached the rank of first lieutenant and was put in charge of a section (50 soldiers). Something very few foreign legionnaires are given. He gained stature and was praised for his dedication, drive and outstanding survival skills.
During his time in the Foreign Legion, Valesh learns discipline, loyalty and camaraderie. His fellow soldiers are like brothers and they go through fire for each other. He also learns to stand up for the weak and oppressed around the world.


In 2019, Valesh (31 years old) finishes his mandatory 5 years of service. He is given the opportunity to re-sign but decides not to. In the meantime, things have changed in Belgium and he has also obtained French nationality. As a result, he is not being prosecuted by the courts and can return to his family as a free man.
But Valesh is restless. Despite the discipline, authority, and rules of the Legion, the rebel persists. The injustices he saw against populations around the world continue to haunt him. He wants to get involved with the people and help where possible. Because of this, he decides to sign up with a company that provides private security missions for NGOs. One of these NGOs is Doctors Without Borders.
Valesh becomes lead officer of a section responsible for securing doctors and nurses in enemy territory.


THE PANDEMIC AND NYHEIM


After the 2019 AVM-FLA-19 outbreak, Valesh travels around the world. Protecting the doctors and nurses who selflessly work for the people every day. The work becomes more difficult, the atmosphere more grim. The pandemic creates chaos and anarchy. Governments make mistakes and the population is left to its own devices. Valesh becomes frustrated by this but still wants to continue and continue his task.
In the first days of September 2021, Valesh and his unit are deployed in escorting the doctors and nurses to Nyheim, Norway. Their mission is to support the medical staff and manage the care of the residents.


A turning point for Valesh follows on October 30. PLIKT decides to take tough measures against the new virus variant and bombs Oslo with napalm. The consequences are incalculable and the population is shocked. It triggers an enormous flow of refugees who make their way to Nyheim. Doctors Without Borders opens a new refugee camp for them. After a few days, it was clear that this camp too was under the spell of the virus. Unprecedented panic and chaos broke out. People fled and in the chaos, Doctors Without Borders also left their post, everyone's safety was at stake.
Valesh and his unit tried to protect the citizens from the infected. But they too were powerless in the face of the tremendous speed at which the virus was spreading and the aggression of the infected.
Valesh's entire unit fell prey to the virus. Sacrificing himself to allow as many people as possible to escape and still provide them with some safety. Valesh was severely wounded while fighting the infected and was left for dead.

Barely, he was found by the side of the road and refugees brought him to the gates of Nyheim. There they were let in and Valesh was taken in and cared for.
Recovering from his wounds, disoriented by the events of the past few weeks, embracing the feeling of helplessness and dejection, Valesh decides to stay in Nyheim. The safety within the walls offer him no peace, his discontent and frustration surrounding PLIKT's actions, bombing civilians and cities, continue to gnaw at him. He leaves the medical facility and makes his way to the East Gate that separate the safe walled city from the rest of the region.