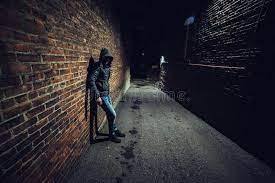 Born to a lower class family in St Petersburg, Russia, David had a difficult upbringing. David's father, an American man who moved to the Soviet Union before it's collapse, died in a car accident when David was just 4. David's mother struggled to provide for David. At 13, David dropped out of school despite having an aptitude for maths. He joined his cousins and their friends in a life of crime where he thought of clever ways to smuggle items around the city without being noticed by law enforcement. David only cared about making money and making as few enemies as possible doing so. Using the little money he obtained through crime he helped support his mother.

At 19, David received an offer from a local crime boss to smuggle several handguns across the city, which he did so with ease. From here on out he worked for this particular crime boss, specializing in smuggling guns for him. His new boss was rapidly expanding his territory beyond the city. During this time, David spent a lot of his time running guns further north, supplying common criminals and separatist groups. When the outbreak hit he was across the border in the Finnmark region making a delivery to one of the separatist groups when he drove into a horde of infected. Cornered, he ditched his car loaded with guns and cut through some nearby buildings to escape. Now alone and lost in a place he is unfamiliar with, David's ability to survive will be put to the test. David figured with his connections to some of the separatist groups he could make it to Nyheim, the closest major city to him. From there he figured he could work his way back to Russia. He hotwired an abandoned car and drove as far as he could with what fuel was in the car However David was not aware of how bad the situation was in Nyheim. He drove most of the way and walked the rest of the distance. Arriving on the outskirts of the city, David was thinking he may be stuck here for a while.

Being lost in the apocalypse allowed David to explore new opportunities. David always wanted to distance himself from associating with his former boss and crew, allowing him more freedom to do business with whoever he wanted. This was the opportunity he was looking for. David has ambitions of being an independent gun trader/smuggler/supplier, while sticking to his personal code of neutrality, selling to the highest bidder and no personal business. David looks forward to this new future and is quite optimistic about what it might hold.

Traits and Attributes
After working with firearms since a young age, David has grown very accustomed to them, and knows most guns inside-out. Growing up essentially as a street urchin, David is very street smart, but outside in rural areas is unfamiliar territory for him, therefore his survival skills are limited. David has high mental fortitude due to his rough upbringing, it takes a lot to lower his spirits. Generally quite fit and healthy, no health difficulties.