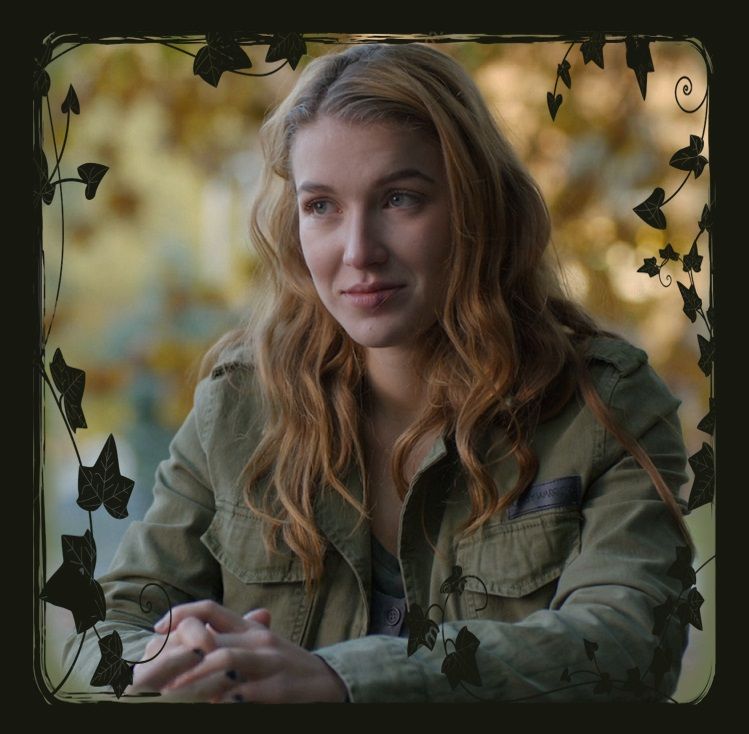 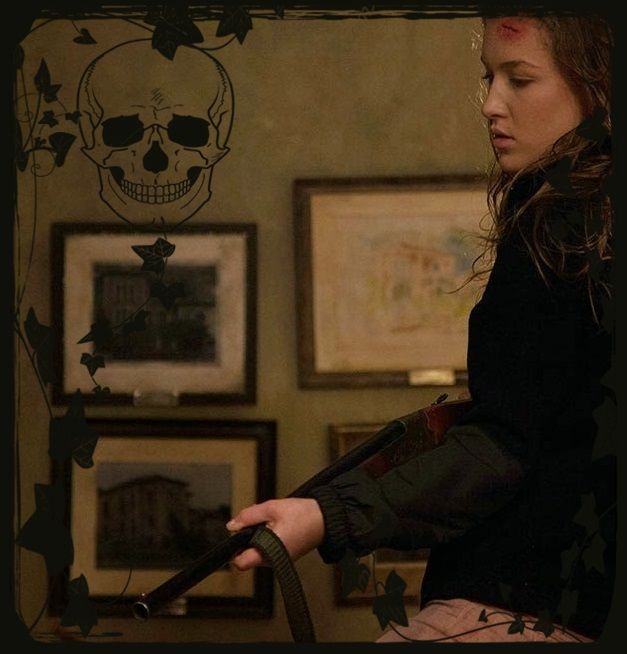 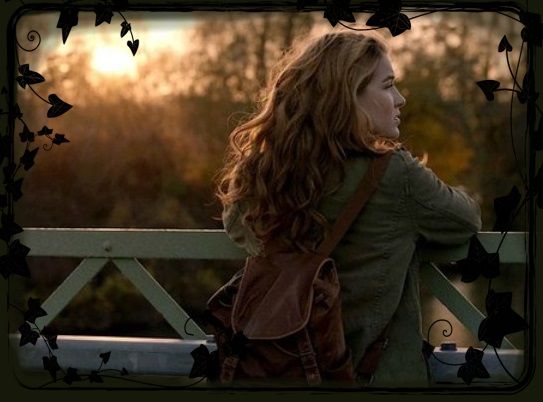 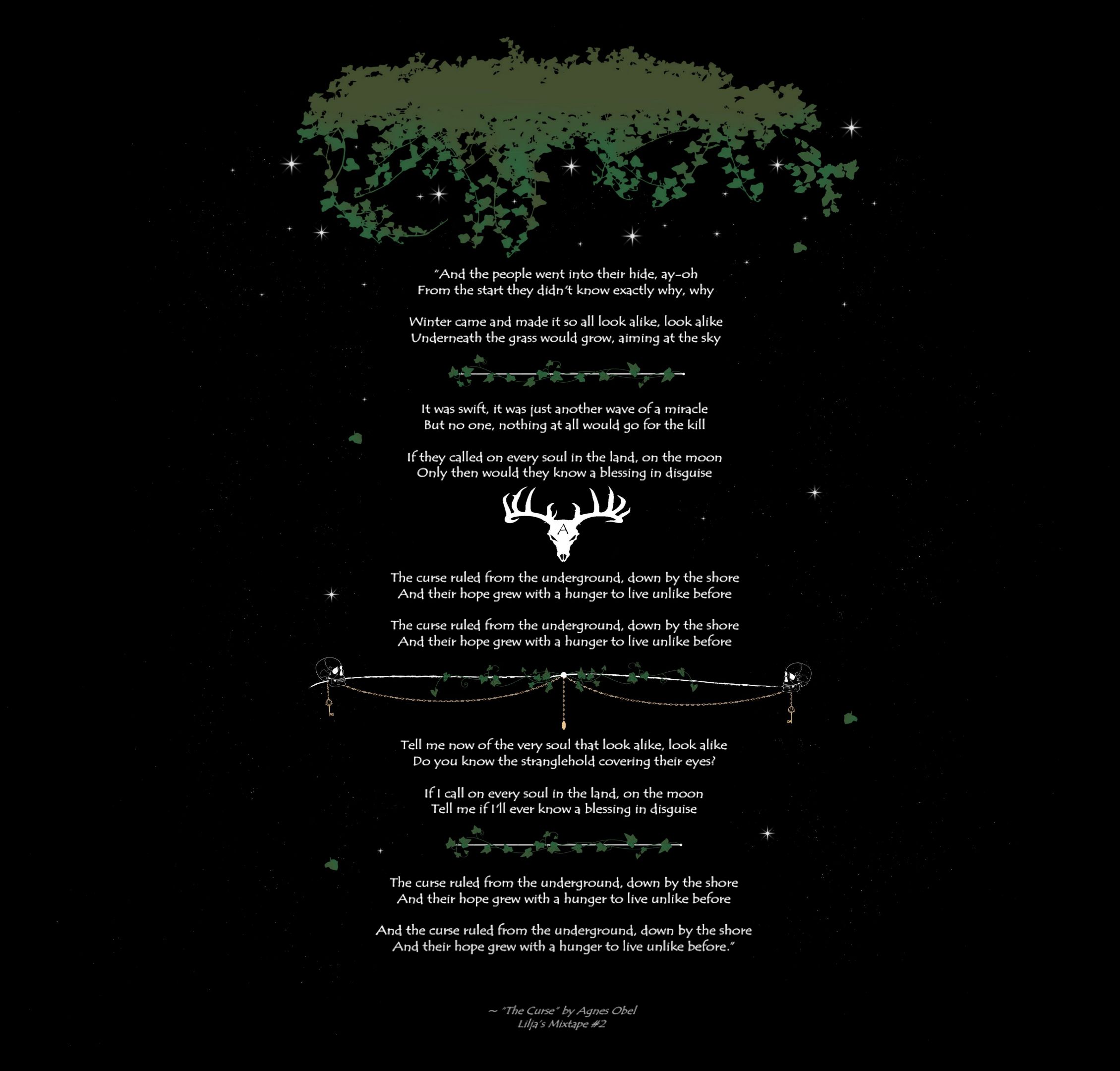 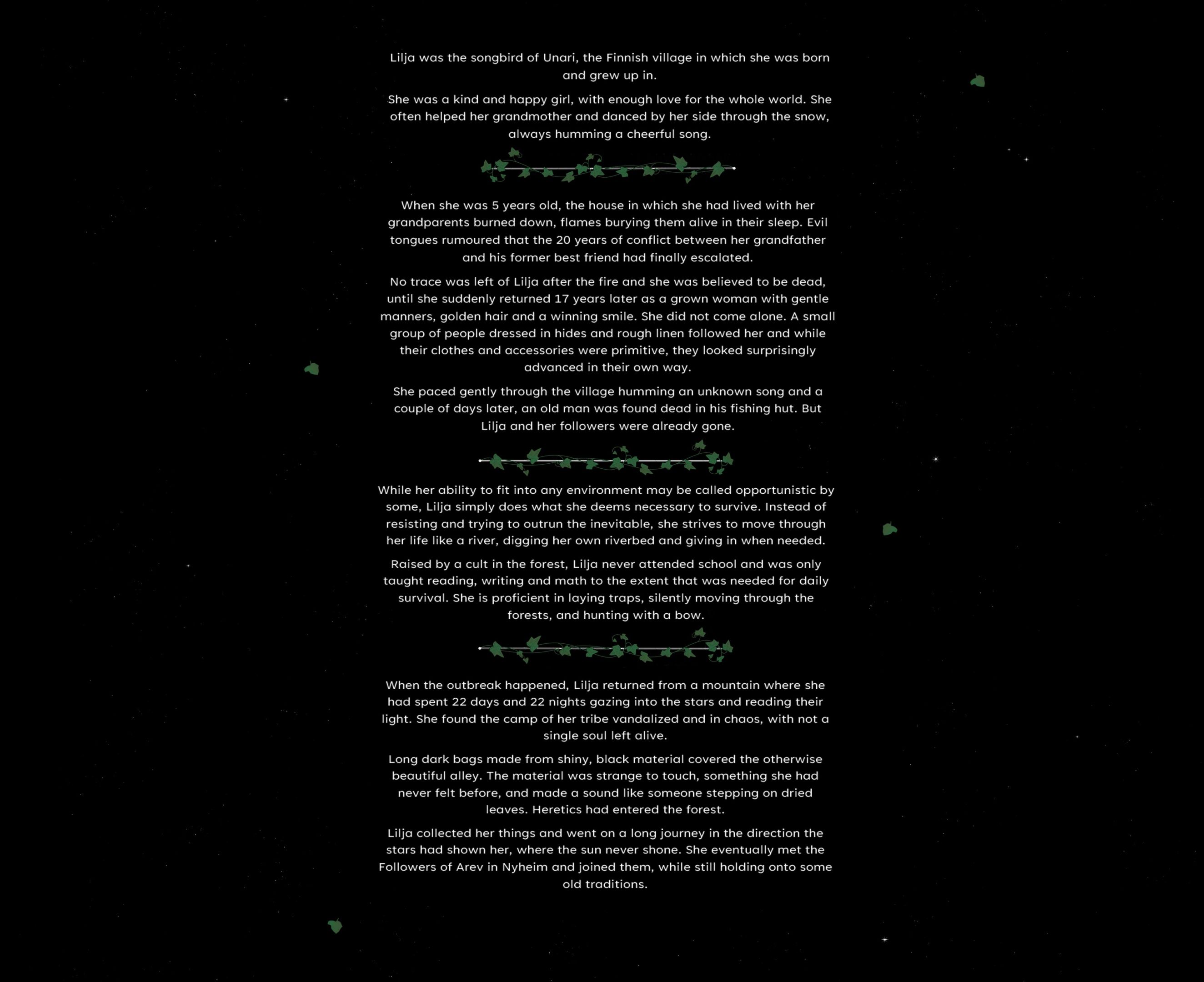 “And the people went into their hide, ay-oh
From the start they didn't know exactly why, why

Winter came and made it so all look alike, look alike
Underneath the grass would grow, aiming at the sky

It was swift, it was just another wave of a miracle
But no one, nothing at all would go for the kill

If they called on every soul in the land, on the moon
Only then would they know a blessing in disguise

Tell me now of the very soul that look alike, look alike
Do you know the stranglehold covering their eyes?

If I call on every soul in the land, on the moon
Tell me if I'll ever know a blessing in disguise

And the curse ruled from the underground, down by the shore
And their hope grew with a hunger to live unlike before.”

Lilja was the songbird of Unari, the Finnish village in which she was born and grew up in.

She was a kind and happy girl, with enough love for the whole world. She often helped her grandmother and danced by her side through the snow, always humming a cheerful song.

When she was 5 years old, the house in which she had lived with her grandparents burned down, flames burying them alive in their sleep. Evil tongues rumoured that the 20 years of conflict between her grandfather and his former best friend had finally escalated.

No trace was left of Lilja after the fire and she was believed to be dead, until she suddenly returned 17 years later as a grown woman with gentle manners, golden hair and a winning smile. She did not come alone. A small group of people dressed in hides and rough linen followed her and while their clothes and accessories were primitive, they looked surprisingly advanced in their own way.

She paced gently through the village humming an unknown song and a couple of days later, an old man was found dead in his fishing hut. But Lilja and her followers were already gone.

While her ability to fit into any environment may be called opportunistic by some, Lilja simply does what she deems necessary to survive. Instead of resisting and trying to outrun the inevitable, she strives to move through her life like a river, digging her own riverbed and giving in when needed.

Raised by a cult in the forest, Lilja never attended school and was only taught reading, writing and math to the extent that was needed for daily survival. She is proficient in laying traps, silently moving through the forests, and hunting with a bow.

When the outbreak happened, Lilja returned from a mountain where she had spent 22 days and 22 nights gazing into the stars and reading their light. She found the camp of her tribe vandalized and in chaos, with not a single soul left alive.

Long dark bags made from shiny, black material covered the otherwise beautiful alley. The material was strange to touch, something she had never felt before, and made a sound like someone stepping on dried leaves. Heretics had entered the forest.

Lilja collected her things and went on a long journey in the direction the stars had shown her, where the sun never shone. She eventually met the Followers of Arev in Nyheim and joined them, while still holding onto some old traditions.