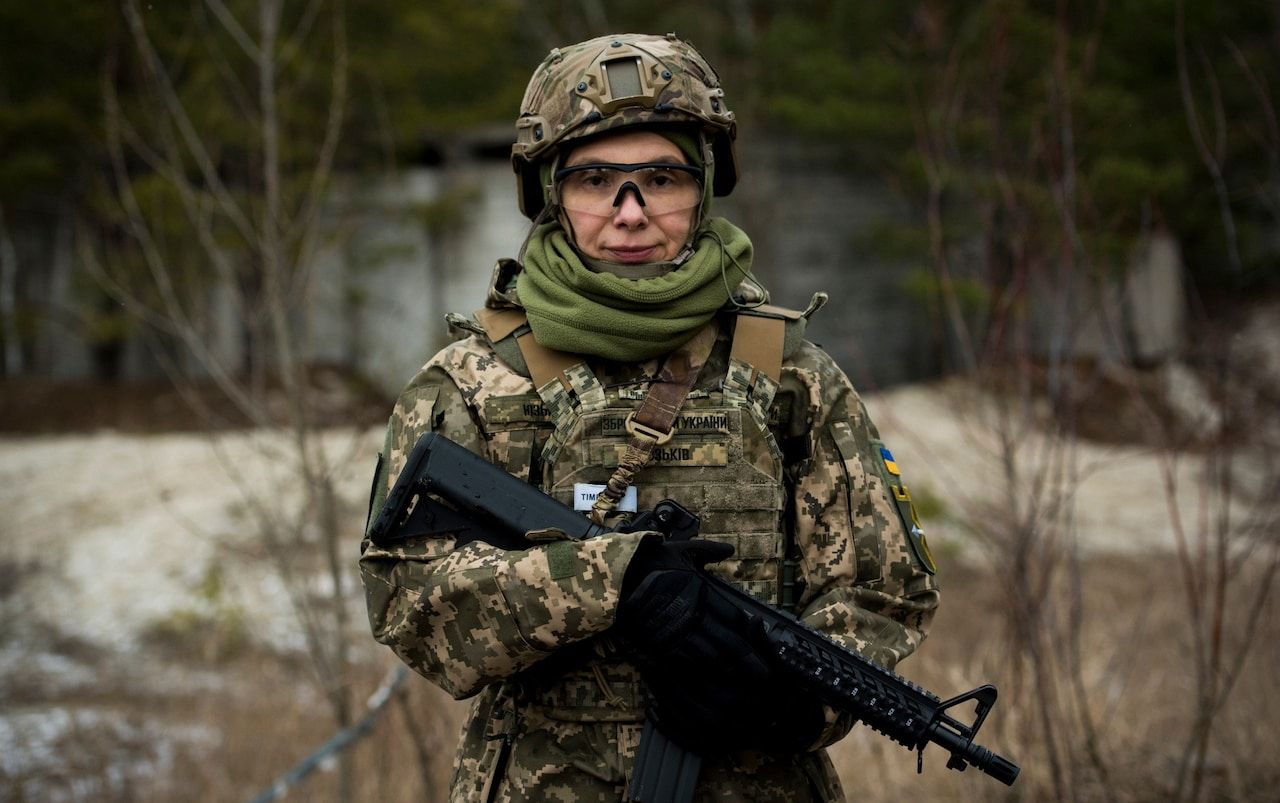 Nataliya grew up in Donetsk in Eastern Ukraine, her childhood wasn't anything special, she was like every other kid in her neighborhood.

When she turned 19 in 2012, she chose to enlist in the Ukrainian Military hearing rumors of the Russian MONSTERS invasion to soon occur. Cue early 2014 and the rumors turned out to be true. She had finished training by this point and was stationed in her city of Donetsk on the Eastern side of Ukraine and felt the force of the Russian PIGS invasion.

War was is coming.

The Russians came. Their tanks, their planes, their soldiers, young men so unexperienced but so convinced of their mission they threw their lives to the cause like cattle.
The rings of her standard issue AK-74 pierced her eardrums as she fired at the target moving before her. The Russian soldier never saw her, he was looking at a map while falling behind his unit,
blissfully unaware of her unit a mere 50 meters away.


She watched him fall, he didn't turn, he didn't make a sound, maybe she didn't hear him cry out in pain due to the gunfire filling her ears but he hit the ground almost silently as if he never fell.
Soon a second Russian soldier turned to face her unit, hearing the barrage of ammunition fall his comrade, yet he would meet the same fate moments later, caught like a deer in headlights.

Nataliya never felt satisfied with her two first kills, this wasn't her first battle, this wasn't her first win, but this was the first time she took a life and it made her blood run cold,
that was until after the fight in wind-down back at a outpost hours after the battle. She was cheered upon like a hero within her unit, her first sheds of blood celebrated as if
she won the lottery, she smiled and went along, the cold feeling draining her body, being replaced with the warmth of the celebratory alcohol and the cheers from her companions.


After ruthless Russian assaults, her unit chose to fall back, seeing how many bodies the Russians KILLERS were willing to throw to secure this victory, and fell further back into Kryvyi Rih, a city further inland, protected by a river dividing them from the now Russian controlled Eastern Sector, Nataliya was furious. Not only had the Russians taken part of her homeland they had taken her parents, her home, and friends she left behind, now under Russian rule.

Her unit remained in Kryvyi Rih until the news of the infection began to spread and cases began to arise within Ukraine and neighboring countries. Her unit was ordered to act as a peacekeeping unit within Kryvyi Rih, and keep the peace as long as possible, which was to no surprise, far from being an easy task. Families could be heard crying in fear, poverty struck the streets of her once stable
country. She knew her country was never perfect, it wasn't what her American companions spoke of from back home, but it was enough for her, and her people, they were happy.

But that was no longer the case. News began to spread of the up and coming disease that had terrifying effects on those infected, videos on social media were spreading like
wildfire of these sick people seemingly turning feral. Soon the videos were clearly within Ukraine's border and that is when the cork finally popped off the bottle.

Despite the decent number of military units stationed within Kryvyi Rih, peace was nearly lost within the week of things becoming clearly "end of the world" levels of bad.
Fires were started in the streets, cars pushed over, civilian roadblocks established, and encampments with factions rose concerningly fast until almost the entire city was lost.

By early October 2021, she heard radio transmissions of her fellow soldiers requesting backup, the Russians were finally pushing to take control of Ukraine. Hearing unit after unit be overrun by crazed citizens and Russian troops alike, her unit made the choice to go AWOL and retreat into the Ukrainian wilderness.

Fast forward over a year and her unit began to receive transmissions from what sounded like survivors over in Nyheim.
Her unit began to continue to listen to the Nyheim transmissions. Realizing over the following weeks that the situation there seemed stable and somewhat secure. They
were hearing the same group and individual survivors come over the radio waves and even new voices began to arise, making her unit decide to cast a vote;

"Do we remain here in the woods, or move forward in hopes of civilization?"

The vote was cast and several members of her unit sat quietly as the votes were pulled from a combat helmet written on scraps of paper torn up. They counted 7 pieces of paper
one for each member of her unit. The vote came out a flat 0-7. The push to Nyheim was a go, with full support of her team, including herself. It appeared they had all accepted the loss
of their homeland and had chosen to attempt and salvage the life they were given.

Her unit began the journey, scaling along the Ukrainian coastline until they reached Russia. Unbeknownst to her unit, despite Russia launching a massive invasion on Ukraine, they had seemingly
done nothing to protect their own country and it was in shambles. Massive hoards of the sick roamed the lands, hoards her unit could barely handle. Days turned to weeks as they
traversed the unknown land, following the coast line and fighting off hoards, scrounging what supplies they could.

By the time she reached the Nyheim border it was her and only her. The day previous she had lost her final soldier in a trap set by someone in a residential area, she listened to his screams
as the nearby hoard closed in on him, allowing her the final dash to safety, and on the path to enter Nyheim.

Her companions may have died on the path to Nyheim but their deaths would not be in vein. She would see vengeance for what the Russian Dogs, had done to her people and their homeland.

The first few days of exploring Nyheim were tricky for Nataliya. She wandered around, confused despite having a map she found at a gas station once she crossed the barren unmanned border.
She eventually came across what she assumed was a giant quarantine zone but later found out it was a refugee camp that was set up, this would be her bearing of what was where for the next bit, as she continued to learn the new land she had come across.

Wandering the lands she came across a lovely man by the name of Joshua Lovelace
Joshua took Nataliya under his wing and guided her through some of the dangerous terrain as they made small talk, he explained to her that he was a part of the "Nordic Healthcare and Research" team.

As the two travelled across the lands they ran into a man who spoke of an interesting faith at an airfield. Joshua was skeptical but Nataliya found solace and sense in the strange mans words
and kept him in mind. Eventually Joshua brought Nataliya to Nyheim City and there is where she met "The Father" on the highway over Nyheim. The father spoke the same words the strange man
at the airfield had spoken of. Nataliya listened for a while before taking his radios frequency down on a piece of scrap paper the man had.
Later that day Nataliya reached out to The Father and as she tuned into his frequency and a message on loop turned on. She listened on repeat for a while, as she walked, as she ate,
as she sat alone in houses to hide from the rain. His words felt more and more loving to her and thus she reached out yet again and The Father himself spoke back.

Nataliya met with the father once more, in a run down building in New Nyheim and he spoke to her with his Children by his side, he spoke of love, grace, and forgiveness.
He offered her a place she could call home, a home with family to protect and love, and the guiding light of the Creator to guide her path.
He spoke and Nataliya listened, infatuated but scared of what the Father had to say to her. He was right, she has lived in sin and her path of destruction would get her no where. It wouldn't leave her with peace, it wouldn't bring her happiness or closure. It would fester and rot her from the inside till she becomes like the tainted, those who lived lives full of sin.
The Father was right, perhaps this was what she needed... A family to be with, and something to believe in... To live a life blessed by...
The Creator.

What the fuck was she thinking. That man is fucking crazy.
She won't make the same mistake twice. She reunited with Penelope and hopes to start fresh once again.