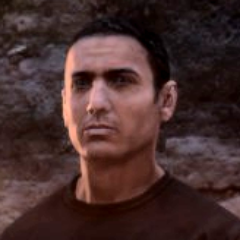 Private Investigator contracted for Hecker Systems LLC, Mr. Guerrero was investigating reports of extramarital affairs by the wife of CEO of Hecker Systems, Mr. William Browning. After the viral outbreaks and subsequent crackdowns, Mr. Guerrero remains trapped on Nyheim, seeking any way out. Before becoming a free lance investigator, Mr. Guerrero worked as a detective for the San Antonio field office at the FBI. Serving with honor in counter terrorism, Mr. Guerrero received several distinguishing awards before transferring to the private sector. Compelled to maintain contractual obligations and is noted to be willing and able to complete all tasks regardless of consequence, good or bad. Mr. Guerrero maintains a realist and moral ambiguity perspective. As a former investigator for the Federal Bureau of Investigations in the US, Mr. Guerrero felt the private sector held more opportunity. His propensity to action and stoic nature lead to him handling more sensitive operations in service of the company. In this foreign environment with much more dangers and challenges, Mr. Guerrero will be hard-pressed to find the right decisions to make.