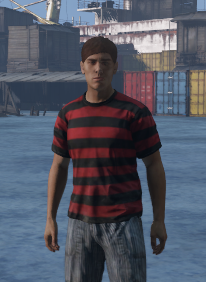 Rat Lord (Real name is Gunther but doesn't like to go by that) was born in the underbelly of new york city and was homeless for several years, barely scraping by with the clothes on his back panhandling and exploiting people for money. He used his cunning and wit to scam people, and sleight of hand to take their belongings right off their person. His hobbies included chain smoking cigarettes on street corners and gambling whatever change he could get on games of dice. He'd hang out at bars until he got kicked out and sleep in any warm spot he could find, maybe even crash at a strangers if he got lucky. He had no family, no friends, and no one to help him. and the only way he survived was by eating whatever he could out of trash cans and hunting the local wildlife.... ( the rats)Then the apocolypse happened and all Rat Lord could do was make the best of this situation by ransacking every house he could get his grubby little hands on. He didn't get the name rat lord for no reason, as he was frequently caught cooking and eating rats that he found on the streets. Although Rat Lord may be grotesque, he was nice to people and manipulative enough to get his way. He arrived in Nyheim by means of a friend he met playing dice who had a plane and hitched a ride over after the outbreak in a last ditch effort to live. He heard about the infection from firsthand experience. He saw the people around him become infected before it ever hit the media and knew something was wrong and knew he needed to try and get away from it. He's now desensitized to the whole thing and even enjoys the whole process of killing the already deceased, it's almost a little bit therapeutic. He's become an expert scavanger from his past experience as a homeless person and actually lives quite comfortably as a nomad now. He was a little taller than average height with brown hair and brown eyes and a skinnier build, about 22 years old.