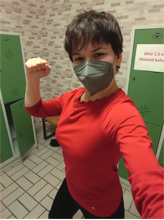 My name is Carolin Grün. I am from Germany and 33 years old. I fell in love with a Chernarussian about 13 years ago. We met online playing games and soon started to visit each other. I had everything packed to finally move to Vybor at the age of 21. However the same day, I was to quit my Job at the Hotel and my studies at University, to do the final step before moving, I was informed that my love was killed at his Job as a police helper/contractor. He used to be a trainer of drug dogs and was hired regularly by the police. After a squad went through a house and called it clear of people, he went in with his dog to find the drugs. However instead of drugs, his dog found a last hidden addict, which started immediately shooting around him, thinking he was getting attacked by a monster in his delirium.

So I stayed longer in New Zealand where I was studying, trying to finish my studies in Programming languages. I ended up switching my major a few times instead, then got bored and finally just left without a degree at 24. Germany didn't feel like home to me any longer. I traveled the world, but no country stopped my craving to find a new home, until I got back to Chernarus one day.

I moved to Vybor where 'He' used to live. I worked many little Jobs like waitress, nanny, Doctor's or Hypnotist assistant, while hanging out and visiting an old rich friend of his in Vavilovo. "When one is really upset, just sit on the hills and shoot" he said. Sometimes I went to shoot far off in the mountains, so the town people wouldn't complain, it had no meaning at the time.

I once more returned to Germany as my body was in need of multiple different surgeries and I just didn't speak enough Chernarussian to deal with all the medical jargon in another language. After roughly 10 years of multiple surgeries in Germany, (from being able to just breath normally, multiple to remove pain, and at last one for disc prolapse) I have finally decided to return to the place I feel more home at. I had learned to be an accountant (self taught).

A lot has changed and looks different now. It feels different yet the same. I barely paid attention to the news when they first talked about the Virus. Don't even remember where I was at the time. I have been in the area for the last two years and yet have to make my home. I don't know what it is that keeps me drawn to this place but they say its safer from the Virus now than most other places.

I am not looking for a life partner, just friends. I have long made up my mind, that I will be an 82 year old single crazy cat lady one day. With imaginary cats that I plan to talk to loads. (They have to be imaginary since I am allergic and like to keep my freedom not becoming a pet owner.)

My current Rule: "If you fall in love with me" *puts gun in her hands* "You will get a bullet". Joking, but I am just not looking or interested in my current mindset and I don't see that change. I will always be happy to make friends, but no one owns me.