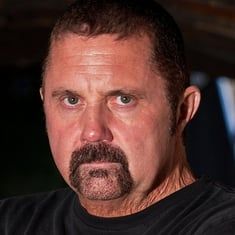 Peter was born in Nigeria where he used to go hunting all the time so he could provide for his parents. Spent most of his time with his parents from a young age he was able to live of the land without the help of his mom and dad. After a few years moved to the United States for a better life. I lived there most of my life then moved to Norway for a hunting lifestyle. They were originally in the city but learned that people in Noway were also pretty rude to foreigners. They then decided to buy a small cabin in the woods to live off the land where they would not be bothered by anyone. In the woods Peter spent most of his life perfecting his hunting and shooting skills Then the quarantine started in 2019 and my parents went to town to get supplies never to be seen again. Pete spent the following months alone wondering what happened to his parents when he decided to go and look for them. He started Packing all his stuff when he decided to take his rifles with him . On his ventures through the woods, he ended up stepping sideways over a ledge and slipped down the side of a hill and lost all his supplies and weapons. when he regained consciousness at the bottom of the hill he learned that someone had ransacked his bags that he lost up the hill and now no longer had the means and hope to defend himself or look after himself. He then decided to take a detour to get some basic supplies however this meant he had to travel alot slower than originally planned . As he started trying to make his way over to his original route he ended up straying afar from his original course and ended up on the outskirts of a place called Nyheim. Oh well lets see what supplies we can gather here before decided if its still worth moving on.