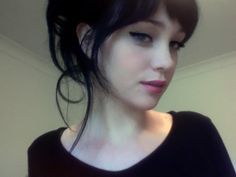 Lucja was born on July 23, 2000 in Warsaw, Poland. After giving birth, her mother abandoned her and she remained the only daughter of a single father. After she completed her highschool education in her hometown, she did not go to college and decided to become a writer. Although she tried to write a book many times, she failed every time and started writing poems.

At the age of 19 she decided to travel the world to gain different experiences and reveal her poetic identity. She started this tour from her own continent and traveled all over Southern Europe and gradually turned north. Although the AVM-FLA-19 epidemic started to spread in this process, this did not deter Lucja from her journey. In 2020, she started to travel to the northern countries and revealed his poetic personality. In the meantime, although she suffered many difficulties due to the epidemic, she made a living on his own by working in the places she went. She arrived in Nyheim in 2021 as she continued her world tour, and was left there alone as the epidemic took its next phase.

With the epidemic moving to the next stage, Lucja, who was alone in this cruel world, tried to draw a new path for herself and suppressed her poetic personality and revealed her surviving spirit. In the process, she made many friends and lost many friends. However, she is ready to do everything in his power to survive.