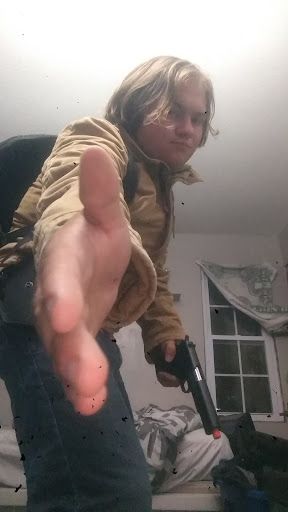 Noah was born in Connecticut, USA to a military couple. His mom being a corpsman in the Navy and his dad being a marine. He lived his first 10 years of his life in Connecticut mostly with his mom and grandparents due to his dad always being deployed to give his mom the most time with her son. Due to the time spent with mostly with his mom, Noah was more Intune with his moms compassionate and selfless side then his dad's rough and abrasive side. Even though his dad wanted Noah to be more interested in the military he was proud when Noah said he wanted to help people like his mother. Even though Connecticut was quiet for a family to live they had to move to an on base apartment overseas forcing Noah to leave his friends. Poland was very different then USA. Noah quickly developed into a more softspoken, social anxiety personality for most of his time there. He did make two friends on the base one being a polish air force pilot that spoke really good English almost like he was from the USA and another kid who was basically living on base for the same reason Noah was. The air force pilot was more of a role model for him frequently letting him watch him train the other pilots. When he was 16 he even let Noah join him in the copilot seat of the training jet during a training dog fight. Just feeling the jet's violent maneuvers and the excitement of his friend making the jet seem to dance in the air. It was a peaceful yet adrenaline pumping ride that forever changed Noah's life. He finally made the decision to join the U.S Airforce and was sent back to the U.S at the age of 17. He graduated boot camp at the age of 18 and started training as a pilot while going to collage to become an officer. He didn't get far when the sudden infection turned up. When the infection first hit he was on vacation with his family in Nyheim celebrating his graduation from AIT. Noah couldn't remember that day when it all went to hell but he was sure that his parents didn't make it. It was all a traumatic blur. But he knew that he had to move on and survive.