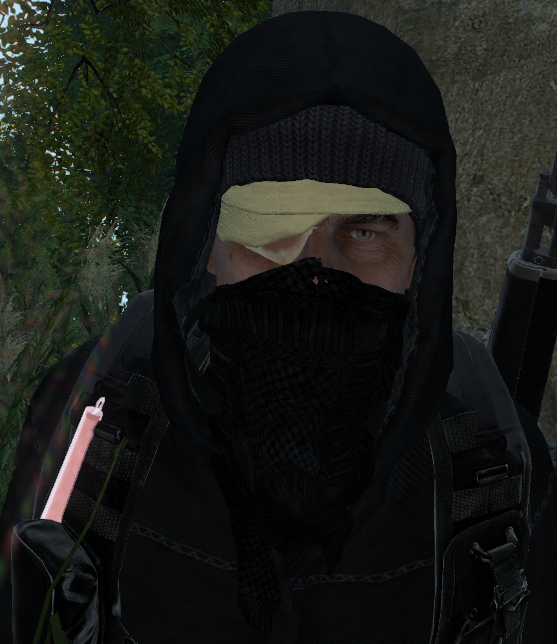 2 Weeks before the infection broke out Billy had taken a job in Sydney Australia. He was to be there for three weeks and Decided to set bring his wife and Son and put them up in an apartment he was renting, so he could see his wife Rebecca and 2 yr old son Milo.

Billy was finishing up running some wire in a new office building just outside of the Business District. He looked out the 6th story window and noticed cars jam packed in the street. People running around frantically, some people where tackling others, and what looked like "biting" each other.

Billy Takes his earbuds out

"What The Fuck" Billy exclaimed
He paused his Mp3 Player and put his tools down to go find the other employees to see what was going on. Billy looked at His Phone. He noticed there was a Missed call. It was from his wife the Voice-mail notification caught his eye..

" Hey bab I was just calling to see how you coming along. Can't wait to see you tonight.. Baby Milo says Hello. The Police came by and told us there is a public emergency and to Stay indoors, so looks like a cards night for us. I love you so much Billy-Boy. See you in a Few hours bab. BYE! MUAH!"

Billy Presses 2 and hangs up. He walks downstairs to the Lobby it's completely empty just the madness running around outside. Just then a Man bursts into the doors. He has a Bite on his Shoulder and it's bleeding profusely.

"WHAT THE FUCK IS GOING ON OUT THERE!?" Bill exclaimed.

The Man in obvious pain. Moans one Word
"Zombies" and then stops breathing. Billy looks out the door and see the work truck parked in an alley. Its just behind the traffic and will be easy to get out. He reaches in his pocket for the Keys, with a sigh of relief when he feels the jingling around as he pulls his hand out. Suddenly the man on the floor stands straight up and stares right at Billy. The creature let's out an ear piercing shreik and lunges toward Billy. He pulls his screwdriver from his tool pouch and buries it into the creature's skull.

Panting heavily he looks to the truck. The street is empty he makes a break for the truck. He gets to the truck safely and gets on the road. He frantically scans radio stations. Most channels are static but the ones that come in are playing the tone from the emergency alert system.

Billy reaches for his Phone, and dials his wife's phone number.

BEEP BEEP BEEP
NO SIGNAL flashes on the screen

"FUCK!" Billy exclaimed as he buries his foot to the floor red-lining the truck.
Home is Where your Heart is

Arriving back in his town, he Pulls into his street. Its eerily quiet. Pulling up to his house he sees a Police Truck had been wrecked into his neighbors house. He takes a quick look around and b lines for the front door. It's standing wide open. When he gets inside he finds a horrific scene he finds the half consumed body of his former wife. But this wasn't his wife. When he begins to cry the body lunges to life gasping for air. Milo is nowhere to be found. He stands over his former wife and smashes her head with a ball bat. He falls to the ground crying. He crawls into the babies room and finds a picture of the three of them smiling. He grabs the picture and puts it into his pocket. He stands and looks into the bassinet and finds the lifeless corpse of Baby Milo. Next to him is a note.

Billy-boy if your reading this then I am sorry. When the truck crashed into the Johnson house I put Milo in his crib to sleep so I could investigate. When I opened the door two people that looked to be infected with something ran to the door I slammed it shut but not before one of them bit me. I was afraid of what was to come. I tried to call you but the towers must be down. Looking outside ide assumed the worst and that you were dead and I was going to be soon. I didn't want Milo meeting the fate I met. Good bye my love. You will always be my whole heart.

I made it to Sydney Port. I've got to get out of this country. Nothing left here for me but bad memories. I checked a few boats but either they didn't have keys or wouldn't start.

Just then I noticed a boat listing out in the Harbor. I remembered seeing a flare gun in the fishing boat on the end of the dock.. I grabbed it and shot one off.. I was worried about drawing the infected but they don't seem to be drawn to light. Only sound, just then I heard the boat fire up and start toward me.

I spoke with the Captain he told me of a Survivor camp somewhere in India. He claimed the Radio transmission stated there was zero infection there. Clean water plenty of food. One of the US Fleet ships had been docked there. They were able to make a small haven for survivors.

Or so I thought. After weeks of following the Islands and coast lines we ran out of Fuel in the boat. I was able to swim to shore with the captain and we began searching for Fuel for the Vessel. We found a petrol station and I was filling up the can when the Captain decided to check out the Convenience store and we'll he woke up a whole bunch of those crazies.. He got bit but we got away. A couple hours later we happened upon a Message board.. the Town was all but abandoned a few of those crazies walking around. We began reading when Dave started vomiting up black liquid and screaming. He lunged at me So I pulled out my shotgun and blew his fucking head off.

I looked at the board quickly because I knew the shot would draw attention. A note.. hastily written

::Chernarus::
Safe Zone no infection.. Sam if your alive...meet us there!

Just then a crazy came around the corner I ducked into on old truck. I waited a few hours snacking on my candy bar and my bottle of water. When I thought it was clear I noticed the keys were in the truck.. I popped the hood. Everything looked in order.. the tires held air.. I poured the fuelni had into the truck.. I had one shot at this.

I turned the Key.. and the son of a bitch started right up. I put it in gear and began moving through town there was a map in the glove box as I reached for it. One of the crazies smashed through the windshield. I floored it. I shook the bastard off and made it out of town. But I guess in the adrenaline I didn't realize I had a piece of glass jammed in my eyebrow. I pulled over at a rest stop when I saw it was empty..I dressed my wound.. and plotted a course..

Chernarus here I come. Hopefully you were right.. I'm not Sam but I'll be right behind her.