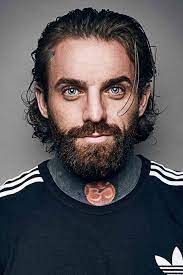 Aaron Garrett lived in Birmingham, England when the virus spread. He was an office clerk crunching numbers for big CEO's when the virus hit. Everything changed when he lost his; Mum, Dad and little Brother to an attack on his group when they were seeking shelter. Aaron was left alone, no one to spend his days with in the apocalypse..

Months go by and Aaron's earnt a reputation for himself finding supplies for the various groups dotted all over the city. This doesn't go unnoticed and gets picked up by the main gang, Central 6. Central 6 employ him for months to come until..

Aaron got mixed with a few bad apples whilst surviving out in Birmingham. Aaron was the main loot runner for the Scavs back in his local area. He was the go-to guy for getting his supplies back in pristine condition and knowing the best locations to find whatever his clientele need.

He's quite the short-fused individual and isn't one to take anyone's shit. He prefers to work as a lone wolf ever since losing his nearest and dearest friends and family to the virus so he doesn't form any friendships leading to mourning when they're gone.

Aaron's boss set him up, thinking it was a supply run he looted a location this time not his choice but his bosses. When he was captured he was knocked on the head and the next thing he knows, he wakes up in the fields of Chernarus, confused, beaten and broken.