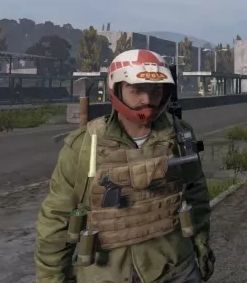 Worked for Kentucky Industries for the Blind as a counselor for 15 years. Earl always had a soft spot for people with disabilities because his younger brother was born with cerebral palsy. Patience and empathy came natural to him, so this career choice was a no brainer.

In his down time, he took up an interests in learning to fly helicopters. After classroom training and 100 Hours in the air he became an official Helicopter Pilot and took his first job as a tour pilot flying around the city.  Eventually that turned into taking people up and sky diving out of the helicopter. All that fun ended when the outbreak hit the globe he decided to help people in places that was heavily affected and took a job with Red Cross and help with rescue missions helping evacuate people in need.

After only working as a pilot in the infected areas for 3 months he quickly changed as a person after seeing so much evil in the Living and the non Living. Most of the time the people he was helping wasn't always the nicest and he started to question what he was even doing as things was always what they seemed. Back home things had also gone south as friends and family had passed away or gone missing. Earl was alone, lost and had no purpose.

After a few weeks working at a post in Deer Isle he met a small group of survivors living in a summer camp in the middle of nowhere.  He was hesitant at first when he approached.  They all wore nothing but all white and seemed super religious  but they welcomed him with open arms and put him at ease. The area was secluded and very secured. The people lived off the land and each person contributed something that helped out everyone.  He decided working and doing whatever he was doing before was gonna get him killed and for nothing. These people was a community and at least had some type of hope and meaning. He asked to stay with the group and he would contribute as much as he could.

After several days bunking in a cabin and sleeping on the floor he was told at lunch that a special visitor is coming back and will help them get back on their feet.  He was confused because he thought everything was working out fine. When lunch was over everyone immediately congregated and they all did a praying ritual talking about a man that is The Lord of the Light.

The next day a man showed up alone as the sun came up. Very tall and very thin. There was an auroa coming off of him and Earl knew this man was legit special. The weather seemed to have changed but Earl thought that was just his imagination. This man voice was smoothing and strong, when the community told of Earls presence The Lord of the Light shook his hand and Earl felt an incredible energy. Who really was this man and who are these people?

The rest of the day was nothing but prayer, talking and drinking beer that was found in an old restaurant days before. Things quickly went south when wolves was heard in the distance. I guess from all the cooking of the food they picked up the scent of it. The camp was then attacked by an entire pack, simultaneously a group a bandits also arrived and things got messy and scary. Earl managed to escape alone not knowing the full scale of what happened back at the camp. It was too dangerous to go back.

For now, Earls purpose is to survive alone and find his people and The Lord of the Light.