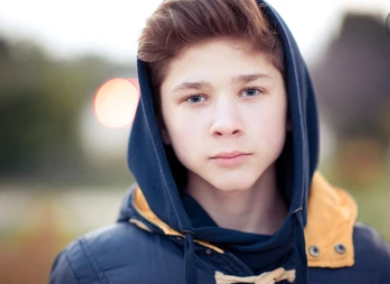 Rack Rack knows very little about his past and biological family, nor does he really care. Somehow finding himself in Nyheim, the boy was told he was found by one of the older 'Street Rats' as a toddler. The fearless child had climbed down in to the tunnels that ran under the main city. Aimlessly yet curiously pushing forward through the barely lit corridors until his future family had found him.
The older teen that had found him waited weeks, certain that someone would be looking for the child. It was six months and not so much as a missing poster had appeared in the city, at that point it was all but certain the child had been forgotten by the world above.

Nyheim had little to no infrastructure in place to deal with lost children, just about every problem in the region was handled by PLIKT, an organisation not everyone had faith in. Their stubborn pursuit of 'The greater good' had left many behind while meeting the 'needs of the many'.
Their leadership's philosophy inevitably created discontent among many of the people their operations had not benefited. While most people chose to live within the system, those who did not trust the faction were left at a major disadvantage.
This is how the 'street rats' came to be. Orphan's, conspiracy theorists and the homeless. The people society had failed. From their position of privellege, those people society had not failed would ignore or simply not even notice these 'rats' existed. Living right under their noses, sometimes literally in the case of the tunnels.
While most people would turn their nose up at rats, the rat became their symbol. Rats were survivors, by any means, a perfect symbol for the survivors of society's failures.
Many in this pseudo-faction of outcasts cannot read or write, making their origins difficult to trace but it is common knowledge among them that their alliance dates back as far as 1920 when PLIKT had begun enforcing quarantines in response to the Spanish Flu outbreak. The exact truth of their alliance's creation is unknown, even among the Street Rats themselves. Most of them too focused on surviving to care anyway. The alliance has kept many alive who would have died otherwise.

In the modern day, one group who are apart of this alliance consist largely of orphaned or abandoned children and teenagers, each of them looking out for one another as if they were family. Doing whatever it takes to stay alive, many stealing or hustling to get their next meal. The youth would welcome Rack Rack with open arms. For six months he was simply referred to as the new kid until one day the boy was asked his name. The four year old did not have an answer. The children debated his name for a few days before one of them suggested they let him pick his own name. The child thought for a moment before the boy excitedly shouted "RACK RACK!"
To this day, Rack Rack doesn't remember his logic in choosing that name, or if there even was one... but his peers found it amusing and for better or worse, he was stuck with it.

When the new infection came to end the earth, the poor living conditions of the street rats inevitably caused many of them to perish; while their numbers were lower than they had been in many decades, they would do what rats do and adapt.

Rack Rack had grown attached to one old man of the street rats. The man taught Rack Rack most of what he knows, for better or worse. This old man's health had been worsening for sometime, leaving Rack Rack feeling responsible to take on a more proactive role and venturing to the surface and out of the city more often in search of aid and supplies.

At age 15 Rack Rack is uniquely equipped for the new circumstances in the city he finds himself. Having many contacts with the invisible outcasts of society has allowed him a unique advantage in the new chaos the infection has brought, both in terms of information and a unique set of survival skills.