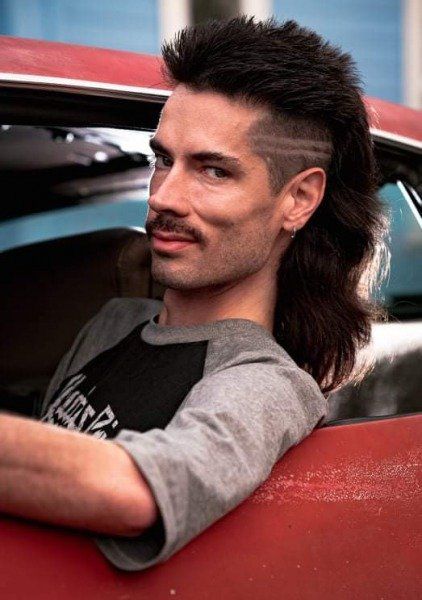 On a fateful day in May 1994, Larry was birthed in a plastic kiddie pool by a midwife in the basement of a trailer in Kingston, Arkansas. Larry was raised dirt poor, their trailer was not even owned by them or on their property, it was stashed in a wooded area on someone else's land. During his early childhood Larry's parents would feed him by poking a hole in a condom stretched over the mouth of a beer bottle. Larry was put to work not long after he was able to walk and talk, tending to the various farm animals that wandered around that weren't even theirs. He quickly learned that only the tough survive and would be seen quite often wrestling hogs, sheep and geese in a mud pit in the back yard. At the ripe age of 8, Larry got his first taste of Copenhagen and Coors Lite, which he was never seen without from then on. At the age of 10 Larry got his first clothes, an old pair of his dad's underwear which he had to duct tape and clothes pin on to fit. By age 13 both of Larry's parents died, leaving him alone with the trailer in the woods, he taught himself how to hunt with a home-made crossbow. Larry continued this way of life for a long while, waiting until the small one-pump gas station in the towns 4 building cul-de-sac was closed to steal Copenhagen, Coors Lite and gas for his generator. Around age 18 Larry was caught and arrested and spent some time in jail where he quickly became the favorite inmate, he would regularly steal stuff from the guards and other inmates to trade them for contraband (this was also the first time Larry every wore shoes or a shirt). Larry was released after 6 months in jail, he took the money he earned while inside, bought a 1986 lime green El-Camino and decided to try life somewhere else. Larry spent quite a few years on the road, robbing who and what he could until one wild day when he seen another epic mullet in a 1986 bright orange El-Camino run down 7 people and a pigeon in Mobile, Alabama. Larry just couldn't get the image out of his mind, the mullet was of epic proportions rivaling his own and the car was downright sexy. Thinking quickly, Larry flipped a u-turn in a busy intersection, clipping an old lady with a walker, throwing her through a plate glass window. Larry jammed on the gas, trying to catch up with the El-Camino-Mullet-Guy. Luckly, El-Camino-Mullet-Guy had crashed into a Coors Light beer truck, totaling his car and causing the back doors of the truck to pop open. Larry was torn, he wasn't sure whether to save the beer or his El-Camino-Mullet-bro. Thinking quickly, Larry jumped out and hollered "HEYYYYYYYYYY, GIT IN!!" while throwing 12 packs into the trunk with both hands as fast as he could.

Once inside the car, Larry stuck out his hand and said "HEYYYY, I'm Larry!", his El-Camino-Mullet-bro introduced himself by saying "HEYYYY, I'm Keith!" They quickly became great friends while evading the cops and listening to AC/DC so loud their eardrums were near to bleeding. After several weeks of hanging out, getting high and drunk together and letting the heat die down, they decided to leave the country. Larry and Keith drove to Brunswick, Georgia where Larry sold his 1986 lime green El-Camino and they snuck on board a cargo ship. Larry and Keith arrived in Oslo, Norway about a week later. They set off using whatever means of transportation they could steal, exploring this strange new country. Within months of them arriving the AVM-FLA-19 pandemic struck, limiting all travel and putting restrictions on movement. Larry and Keith camped out in a pull behind trailer somewhere near a place called Nyheim, waiting for the pandemic to die down, which never happened. Now they are out and about again, just trying to survive.