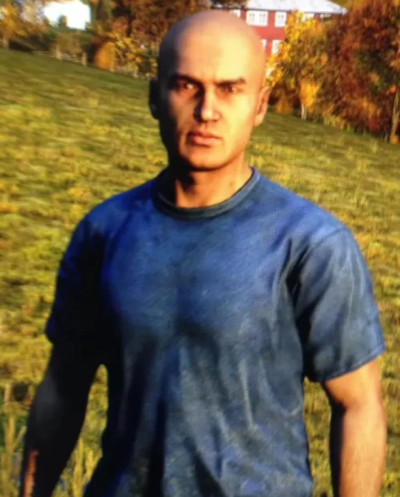 Mark Stipetic is a 26-year-old bouncer, lives in Sorbu.
Mark's parents were Croatian immigrants who first arrived to Nyheim in the 1980s, when Croatia was still a part of Yugoslavia.
Mark was raised as a Roman Catholic.

Mark was a troubled, impulsive, and violend child from a young age. As a result, he was suspended and did not complete high school.

Mark was frequently seen throughout the city, usually commiting petty theft and other minor crimes.

As a result, he was introduced into the system and taken away from his parents.

Kickboxing training taught Ante to value himself, his surroundings, and his potential enemies.

This, of course, led to scenarios of quick cash, criminal actions, and incidents.

He continues to train when he can afford it in these apocalyptic times. He's instantly recognizable. His physical appearance is defined by a broken nose, buzzcut, tattoos, and various scars.

However, at this age, his mentality is nothing like it used to be. He has learned to calm down and approach situations differently over time, though he can still act furiously and uncontrollably at times.

We'll see what ends up happening.