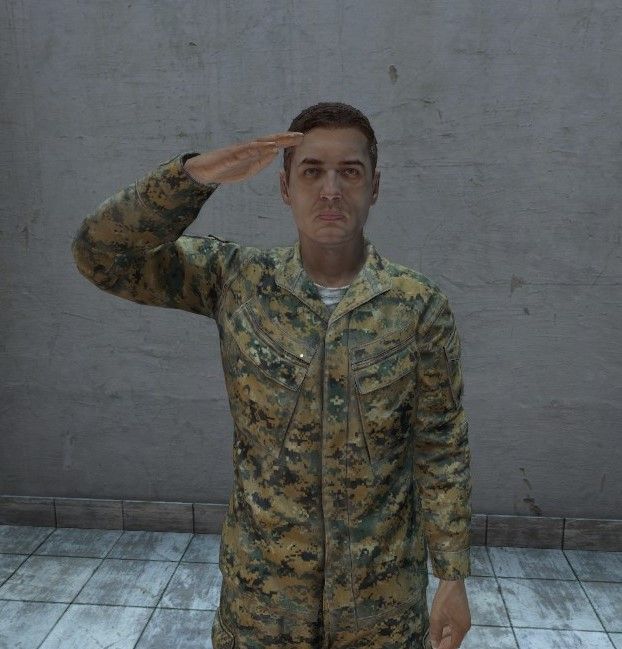 Jim Miller joined the USMC in January of 2014. He achieved the rank of SGT (E-5) by 2018. He was stationed as a Marine Security Guard for the US embassy in Norway.
As the city became overrun with infection, the embassy went on lockdown, no one passed through its doors without clearance. One day, trucks were spotted rolling through the streets spraying mist anywhere they could reach. Thanks to a combination of the building being on lockdown and security therefor ordering people away from windows, and protective equipment being issued to prevent the virus spreading, minimal individuals were affected by the vaccine.
When the reports of violent individuals started coming in, Miller and his team prepared multiple evacuation plans, should their defenses fall. These plans would come in handy, as a broadcast tells them they have less than a day to clear out of Oslo before napalm destroys the city. Miller's team pushes through the city with any important Embassy staff following. There are many encounters with the infected, resulting in gruesome scenes of death as the Marines fail to hold back the tide. Eventually, the entire team breaks as they are overwhelmed. Miller manages to escape down an alleyway, where he locks a gated fence behind him. Miller checks his radio three times with no one responding. He decides that he might be the only survivor and needs to evacuate.
After two hours of carefully moving through the city Miller escapes to the outskirts. After a long time of jogging and walking, miller manages to make it to the quarantine camp, though it's already been hit with napalm. He sees two injured individuals who seem to have escaped the bombing with severe injuries. He rushes over to help them, and as he reaches their position, he drops his rifle to grab his medical supplies. Hearing him, they both turn, and one lets out a roaring scream and they both rush him. Miller barely has time to draw his pistol and unload the magazine. He manages to kill one of them but is forced to flee from the other. Tired and still in danger, Miller is forced to leave his bag and vest to drop weight and escape. He is left with only his tattered uniform and worn boots. He eventually makes it to Nyheim after a few days of running and scavenging. In those days he has replaced his torn and bloody uniform with clothes he found and even replaced his boots with some sneakers. At one point he traded his pistol for food and water, since he had no ammo for it and desperately needed the water.
Now in Nyheim, Miller hopes to regather himself and find his purpose in this new world, hundreds of miles from Home.