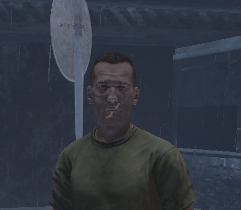 Redrix was born under another name in North America. As the pandemic began to rip through Canada, the United States, and Mexico, escalated riots began to pervade through his city understreets. As riots turned violent, the local government used chemical warfare to disperse the crowds and keep people indoors. Caught out in the mess of things, Redrix quickly became asphyxiated amidst the gas. Waking up to only aftermath, Redrix had lost most of his memory including his name and knowledge regarding life before the apocalypse. The gas appeared to have damaged every inch of his skin, leaving him in constant and unrelenting pain.

Mangled with aerosol burns and scars, he covers his face and hands with rags to stop the air from irritating his skin. Spending his early days walking the streets and scavenging, Redrix made his way toward his country’s coastline. Stowing away on a boat, Redrix left the mainland toward a destination unknown to him.

Shortly after departure, the boat’s crew sounded sick – groaning and bellowing. Being the only one hidden away, Redrix managed to remain healthy. Taking days to build up courage, Redrix came out from his hiding spot to investigate. The crew was no longer living, but instead walking corpses. Pushing them off of the boat 1 by 1, Redrix would sail on this crewless boat until he made landfall.