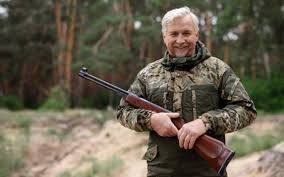 Gunnar is a classic grumpy northern loner. He was born and raised in a village outside one of Sweden's northernmost cities, Jokkmokk. He learned early on to survive and appreciate nature and feels best on his one even though he realizes that he appreciates human interaction to and from. He has lived all his life in Northern Sweden and never been in a foreign country. Gunnar had a secure upbringing and was regarded as normally gifted during his school days, however, he was sometimes perceived as quiet and brooding by adults. Gunnar did his military service as a mountain hunter in Arvidsjaur in the early 90s and continued for a couple of years as a training officer in the military until Sweden disbanded its defense-force. Gunnar continued as a training officer in the Home Guard in northern Sweden for the rest of his career. To earn his living, Gunnar has arranged wilderness experiences and prepper courses for "southerners", which he has done well at and people from far wanted to join his forces. When the plague swept over the world, Gunnar chose early to go to his cabin far out in the wilderness and wait until it blew over. When even the radio became silent, he went to the city again and saw the total devastation. Gunnar has accepted that the old society has reached the end of the road and lives a little day by day and just wanders around. Lately, when he shared a campfire with another survivor, he heard about a place in northern Norway and decided to go there. The other survivor did not know much more than the name and that I took a lot of refuges in the early stages, an might be the las remnant of civilization in northern Europe, As much for social interaction as for helping where he is needed. Since the collapse of society, Gunnar has mostly lived off the grid of his own choice, so his knowledge of the situation outside is limited.