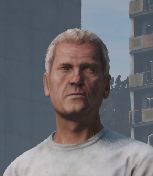 Rocky Raccoon. Rocky is a man born in a small town with his one brother and his father, he is and always has been the protector of his family, he was raised to be respectful and truthful to heart even when it got him in trouble. To say best Rocky was not a rich or well-groomed kid he, was a worker, always grinding and working to get what he needed, stubborn some might say. He never backs down from a fight, but he always knows when a fight isn't worth it. He knows his limits and respects them. He's a very sociable man, easy to talk to. He says what he means and means what he says. Sometimes it gets him in trouble, but he'd rather get in trouble whilst telling the truth than get off scott free on a lie. He's had a troubled past but doesn't let it affect his future. He's spent a few years here and there in prison, but he's learned from his experiences. That doesn't mean he isn't going to do anything illegal anymore, it just means he's not going to get caught the next time. He's always been good with his hands so naturally he ended up working with his father at his car workshop. One night whilst working a late shift with his father, two men came in armed with m1911 pistols and attacked his father. Rocky tried fighting them off but they had him and his father at gunpoint. They demanded money off his father, but he didn't have any to give. The kept pushing and screaming at him to give them money. Rocky sat at gunpoint and watched as the two men, shot his father, in cold blood. Rocky collapsed into the corner, shrouded in darkness. He sat in that corner, hours after the two men had left. A new man came out of that corner, a darker man. Rocky's sole mission in life became revenge.