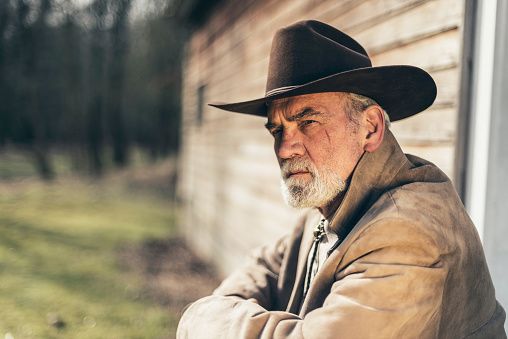 Grew up in rural town in Texas, surrounded by unforgiving desert around him. Took care of cattle and made sure they stayed safe and well fed even if he had to kill local wildlife to do so. Was distant at best from his family, but was still willing to do anything they may need to keep them safe. In his mid 20's realized that the mountains of a different country with a different herd to look after might suit him better so he saved up all he could for the next 10 or so years. Went thru alot of trying times in the attempt to relocate himself to the Norway, in lieu of that has a very negative outlook that sounds vaguely positive to most. Lived his life solo away from most people but is still willing to have a few words with most that attempt to interact with him. Moved to norway shortly after 2015 only for the pandemic to take the rest of his surviving family. Owned a small farm with a few longhorn cattle in the woods to make sure he was alright if times got too tough he could grow things in a garden on his land. Always made sure he had everything he needed just in case someone came along that needed his help. Gets a little jumpy at times when it feels like a dangerous situation but usually keeps his cool. Surprised by the turn of events from the pandemic he rushed immediately to the area that had the least infected, however on his way, lost his cattle and vehicle when he was attacked on the road.