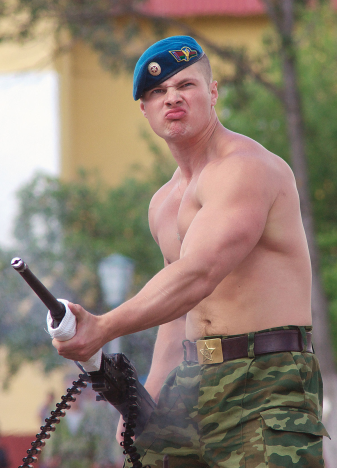 Vadim was born in 1990 in Saint Petersburg. His brother and father always took him on long fishing trips. His father being a former soviet soldier who fought in WW2 was already part of the VDV, which encouraged his big brother Kirill and eventually also Vadim to join the VDV. He proudly served together with his brother. Kirill was always the better soldier out of the two brothers, and it seemed that he took the things he saw there easier. Vadim got deployed at the end of the Chechnya war, while his brother was already deployed there. Vadim's brother sustained a leg injury during the deployment and got sent back home while he had to stay. Without his brother he felt a little helpless and got injured himself a few days later... Rumors still go around saying he was actually the one who shot himself in the foot..

After Kirill has been discharged because of him being not as mobile as he was before due to the injury, Vadim decided that his time has also come, knowhing that he wouldn't function without his brother. Around 2011, a lot of family members migrated to Norway. The two brothers eventually joined the Nyheim Fishing Club, which Kirill took over as the president years later. When the aerial vaccinations began, the Fishing Club was out on the ocean. After two weeks on the water, they came back to land to find out whats going on. Vadim's suggestion of just returning back to the water and let them deal with it themselves was overturned by everyone present so they prepared for the worst. Vadim is totally over that by the way.

Short time has passed until the Fishing club decided to leave the area because it was overrun by weird people. Vadim thought that was his chance to get away from his brothers annoying son Gary. A few days later, he noticed that Gary was also left behind. Gary then joined PLIKT and at the same time, Vadim heard of some people leaving PLIKT because fo some internal conflict. He met Radek who hired him before to assist PLIKT while they had a situation with a weird guy that got infected. Radek told Vadim about what happened and why they left plikt, and also about their future plans to become mercenarys. All these years of relaxing and fishing showed Vadim that he actually missed the battlefiedl so it sounded like the perfect opportunity for him, now that everything has gone to shit. You know, all that built up aggression for Gary has to go somewhere, right? Radek set up a contract for Vadim, which he signed without reading it.