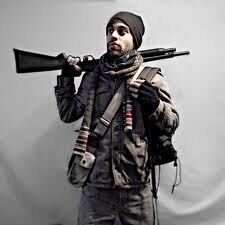 Clive Jackson is a proud Welshman from the city of Newport, standing at 6 foot 3 inches he is a large man with a fair bit of chubb on his bones. After getting his engineering credentials from an apprenticeship he applied to work on oil rigs, after travelling the globe working for a few years he realized he no longer had a home in Wales after not keeping in contact with family members he just faded into the background of the family tree. After accumulating enough money from working he applied for a sabbatical with his company in which he planned to tour Norway. Buying a old Landrover defender he set out on his journey in late 2019 and proceeded to travel around the northern reaches of Norway looking at all sites and mostly going to old relic sites of WW2. Finding a small area called Nyheim he decided to stay and made this his home. Once all hell broke loose Clive headed to the woods and survived meeting friends along the way building a small community of woodsmen.