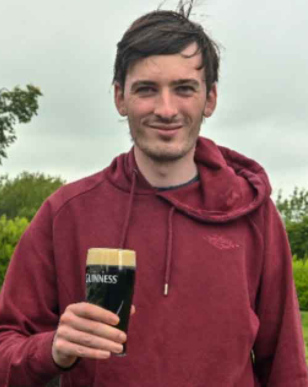 Working class means pub-crawling 'til the small hours of the morning, Darragh is no exception to that class rule, much like most Irish males. After graduating university with a minor in English and a major in Psychology, he decided to take a gap year and grind out all those mad seshes he'd been missing due to study. As a result, on a dare, he agreed to spend the year travelling Europe and return with the verdict of who pulled the best pint of Guinness, if any could top the Irish at their own game.

So far, the travel has been fairly disappointing, walking across Europe was less than it was cracked up to be and he's had to go through more than one pair of tackies to accomplish his goal. After hitting up the legendary beer-drinking nation of Germany, he went north to Denmark and across the water to Sweden, then Norway to crawl through the various locals in hope of a gem hidden among the tundra. Fortunately for him, in the region of Nyheim, he met a girl that grabbed his attention more than Eileen back home, and decided to settle down after his weary year of slithering through the alcoholic backwaters of Europe. Life was bliss, he picked up work as a labourer and she as a teacher, lockdown or not, life seemed fairly good for a man wearing his soles out for a dare.

Until the craic with them mad lads ripping the face off each other began, then it started to get a little bit serious, we'll see how it goes from there.