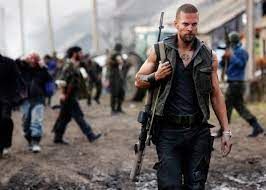 Born in Chernogorsk, Gleb had a relatively mild childhood. His parents were separated when he was born, his mother worked as a prostitute in Chernogorsk, his father left Chernarus when Gleb was 2, thus he was raised by his grandmother from Mogilevka, north of Chernogorsk, where he was raised. Gleb was home taught, his grandmother had taught him biology most of all, which mostly formed his identity in the upcoming years. Because of the isolation and the only interaction being nature itself, Gleb had a very hard time socializing when he was a teen. He was known in Chernogorsk for a stabbing of 3 people he had quarrel with, 2 died, but the police could never prove him guilty. He did understand all animals, except humans. They were an anomaly to him back then, but this all changed when the civil war has started, where he did not only see what humans are really capable of, but also experienced it himself. When his village was massacred by Chdkz, along with his grandmother, he was shot 2 times but survived. In his 19th year, in 2009 September the 3rd, ChDKZ forces skirmished into his village, and massacred everyone including his grandmother, which he was so close to. He, and a few others though, had survived and after this event, he had joined the ChDKZ out of the mere fascination of the absurd, that the ChDKZ were causing. He did not fight on the front thought, he was one of the people, who came after the battle, to search for the ones that have fleed, or finish the ones that have surrendered. In the war, he finally understood not only humans, but their nature too, and this precedingly formed his futher personality. When the outbreak began, he quickly left the remains of ChDKZ and knowing what monsters, and demons the humans were, he did not expect an another fate for them. From then on, He has been living in one of the forests near chernarus, where after some time, hes going to Nylheim.