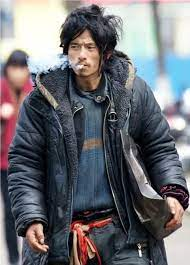 Doug is A lonely wanderer who loves the night, he searches for that which can only be gained with long periods of solitude - the inner voice. To hear it, he must disconnect from the crowds whose voices and desires threaten to overcome his own. Some think he is insane because the world went to hell and he went into the forest and was not seen for years, he loves the forest and is afraid of people because as he was shown from a young age, people or outsiders are dangerous. So he keeps to himself and hunts for food and lives in isolation, where he feels safe. He lives in solitude, avoiding others as much as he can. He will only ever confront people if he absolutely needs to do so. He lives off the land and the small amount of tools that he has gathered over time. He hunts animals for his main source of food, he also has a small shack in the woods to himself where he can grow small plants and store his few personal belongings.