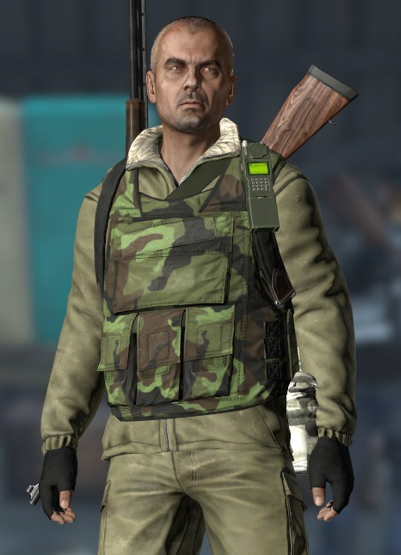 Born in Aotearoa New Zealand, Ellis Walker had gone away on a humanitarian venture when the virus devastated the world. At the time of the collapse, he had been gradually travelling through Norway with the intent of next heading across the border before the Government was forced to isolate their borders in a bid to keep the virus contained, forcing Ellis to wind up in Nyheim.
Prior to the collapse, Ellis Walker was a good moral man, a family man who had three children and a loving wife back home in Aotearoa New Zealand. He had a stable career as a practising Social Worker seeking to advocate for lower-income families and those in need of support and was overall well thought of. His hobbies included fishing, hunting, rugby and drinking with friends and family.

Ellis Walker has, like almost everyone these days been forced to resort to violent measures to protect himself on the road, venturing from place to place in a bid to survive the world of today. He has however so far managed to avoid having to take a life, still harbouring the moral code of the old world, and wishing to retain his sense of integrity and humanity even if others don’t.
He is a loyal man, a respectful man and one of consideration to those who prove themselves to be trustworthy and kind; yet trust isn’t so easily given and nowadays with the likelihood of running into violent characters, Ellis is seeking to surround himself with likely folk, those who might share his desire for a piece of what used to be, sanctuary and goodwill among men and women.
At the core of who Ellis truly is, is a kind and empathetic man if not grizzled by the events that have transpired around him. For those who might come across the man, he is not the type to raise arms against another unless in strict defence of his own or the life of another. Unless in clear danger and threat of an attack, any firearm carried in hand will have the safety set, and the likelihood of being shot at by this man is considerably rare.
Criminal activity is of a similar mind whereas Ellis’ perspective and ideals are concerned. Theft, abuse and any such behaviours towards those undeserving will see Ellis want to speak out and advocate for those who cannot fend for themselves and protect their own.

Ellis' family had meant the world to him, his wife Sarah, two daughters Anya & Mikayla as well as his son Thomas. His Wife Sarah worked as an Emergency Medical Technician, responding to emergency callouts, and providing their family with knowledge of the basic medical skills that might benefit them in life.
Between Ellis and Sarah, life felt like it was moving in the right direction and the pair were both set on doing their best to make a positive impact on the community around them, never in their wildest dreams seeing the coming collapse that would leave Ellis alone and stranded from everything familiar to him.

Fortunately for Ellis, his hobbies have provided him with some skills to get by in the dying world of today. He is a proficient hunter and gatherer, able to gut and skin animals for food and other uses such as leatherworking.
He is also an avid fisherman who enjoys the quiet and peace of it all, even in times such as these. While these were once hobbies in the former world, today they enable Ellis to survive off the land and make the most of what has otherwise been a devastating and desperate entry into the new world.

Left with little choice but to establish a life within Nyheim, Ellis Walker has been forced to put to good use all of the skills that he’d learned in what he now calls his previous life; becoming a hunter and gatherer in order to gain the funds and/or trade for various items and gear that will help him to stay alive out in the wilderness.
In his mind, everyone needs food and if you’re not able to obtain it yourself then you’ll sooner or later see yourself on the menu for something or someone else.

Ellis Walker is a relative stranger in Nyheim so far, having reached the country just prior to the borders being closed off from the rest of the world when the catastrophe first hit, he has since maintained a fair distance from most cities and larger established regions in order to first gauge whether they are safe or otherwise.

Eventually, someday in the near future, Ellis has considered the possibility of being a part of something larger than just himself. Living off of the land on his own has come with some significant disadvantages compared to living under a solid roof and having the numbers to ensure regular protection from the wild predators both human and non-human out there.
He is not a government or military-type however, and so should that day come, it would be most unexpected to find himself winding up in some sort of army or government movement. Instead, he has envisioned a smaller more humble community, one with good people and a healthy respect for the natural world around them.

Ellis is proficient in semi-automatic rifles and small arms use. His previous experience with firearms consists of the recreational use of bolt-action scoped hunting rifles, low calibre pistols and the pump-action shotgun. He has never used Military-style firearms before and would be considerably less accurate and confident while handling one without considerable practice.

Melee weapons experience is slim to none, having only ever used a hunting knife for the use of gutting and skinning wild game. He has used blunt weapons in order to defend himself from attacks of zombies, yet is always first seeking to covertly avoid running into a confrontation with them, and others.