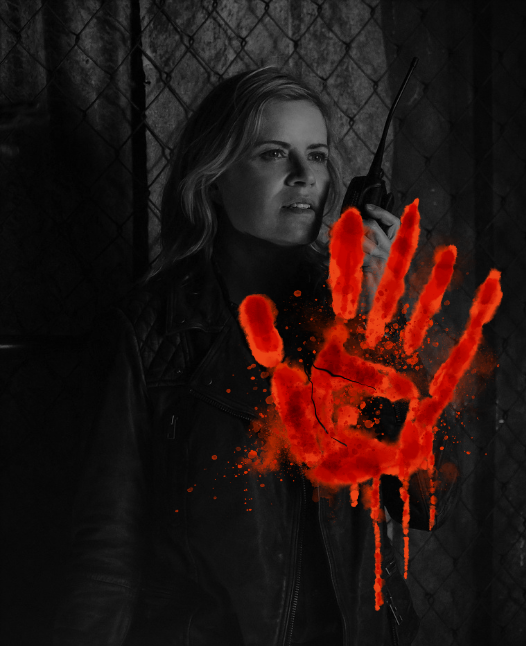 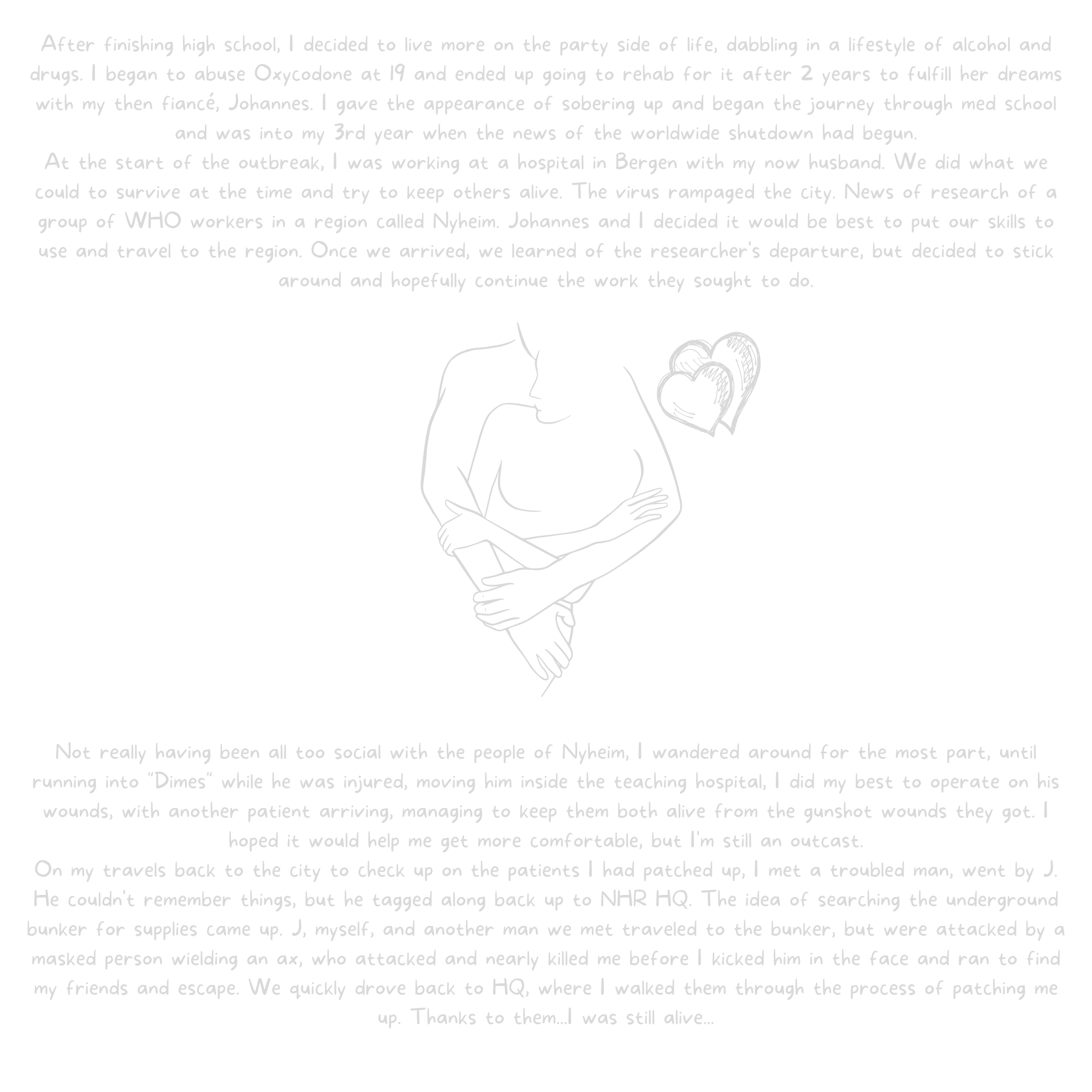 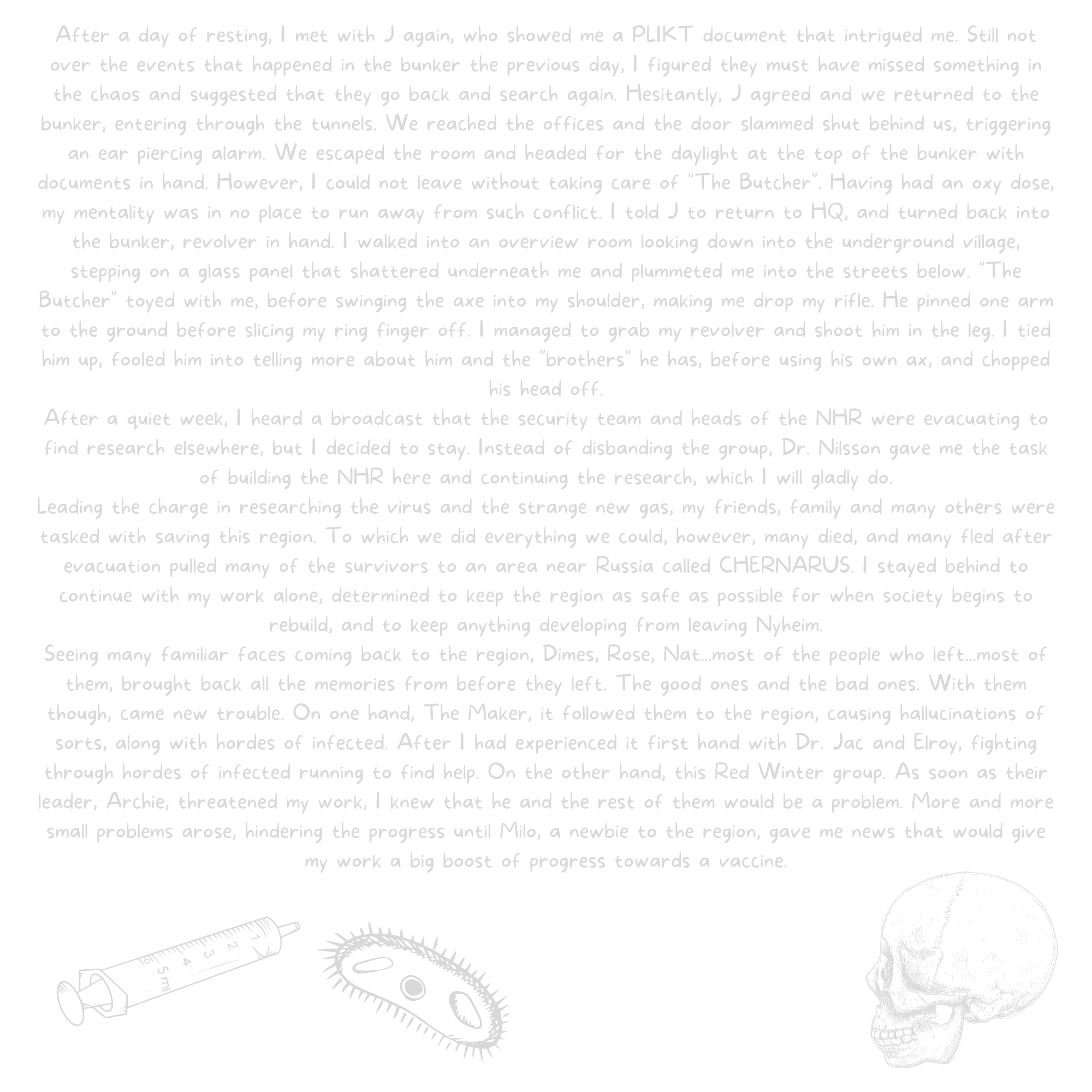 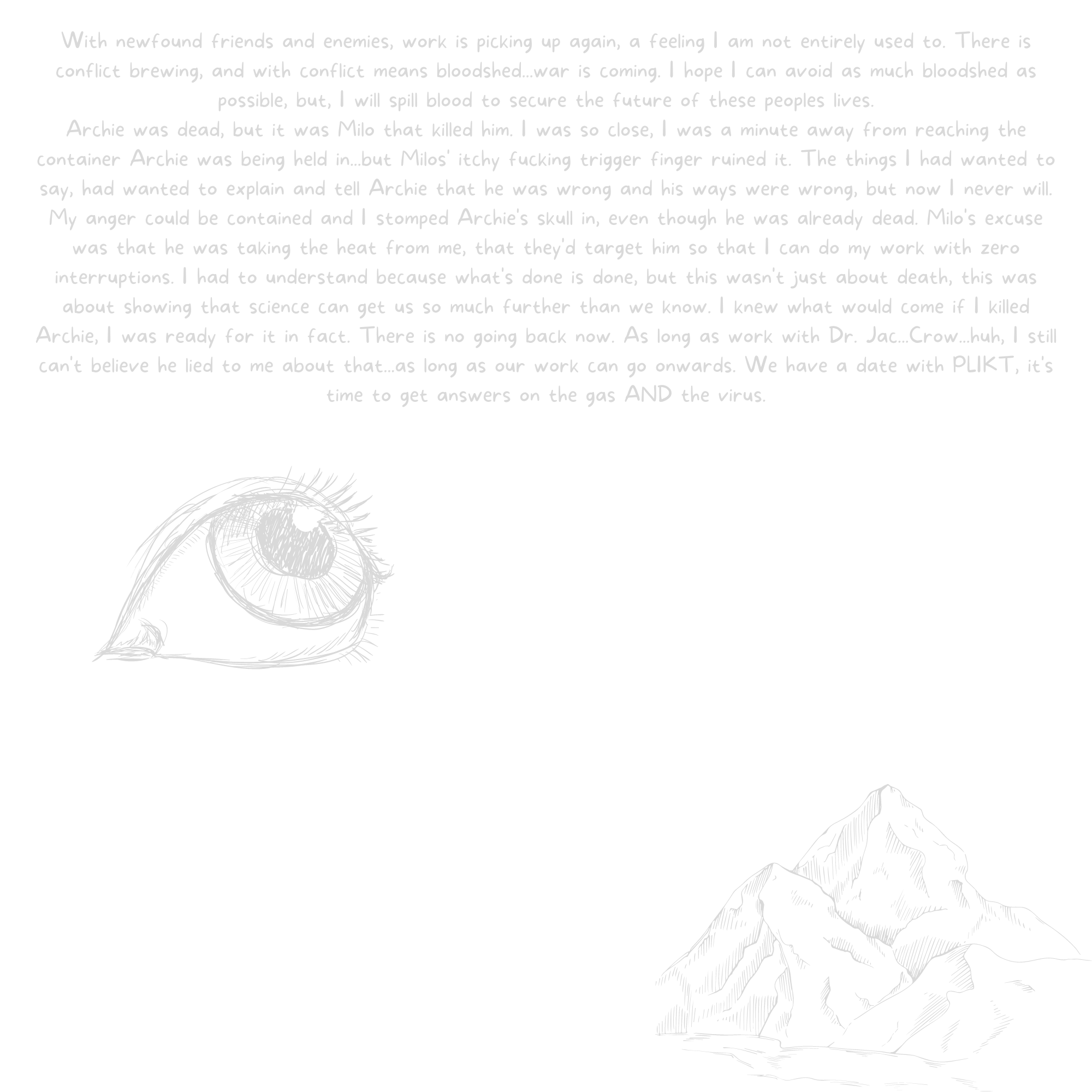 After finishing high school, I decided to live more on the party side of life, dabbling in a lifestyle of alcohol and drugs.  I began to abuse Oxycodone at 19 and ended up going to rehab for it after 2 years to fulfill her dreams with my then fiancé, Johannes.  I gave the appearance of sobering up and began the journey through med school and was into my 3rd year when the news of the worldwide shutdown had begun.

At the start of the outbreak, I was working at a hospital in Bergen with my now husband.  We did what we could to survive at the time and try to keep others alive.  The virus rampaged the city.  News of research of a group of WHO workers in a region called Nyheim.  Johannes and I decided it would be best to put our skills to use and travel to the region.  Once we arrived, we learned of the researcher's departure, but decided to stick around and hopefully continue the work they sought to do.

Not really having been all too social with the people of Nyheim, I wandered around for the most part, until running into "Dimes" while he was injured, moving him inside the teaching hospital, I did my best to operate on his wounds, with another patient arriving, managing to keep them both alive from the gunshot wounds they got.  I hoped it would help me get more comfortable, but I'm still an outcast.

On my travels back to the city to check up on the patients I had patched up, I met a troubled man, went by J.  He couldn't remember things, but he tagged along back up to NHR HQ.  The idea of searching the underground bunker for supplies came up.  J, myself, and another man we met traveled to the bunker, but were attacked by a masked person wielding an ax, who attacked and nearly killed me before I kicked him in the face and ran to find my friends and escape.  We quickly drove back to HQ, where I walked them through the process of patching me up.  Thanks to them...I was still alive...

After a day of resting, I met with J again, who showed me a PLIKT document that intrigued me.  Still not over the events that happened in the bunker the previous day, I figured they must have missed something in the chaos and suggested that they go back and search again.  Hesitantly, J agreed and we returned to the bunker, entering through the tunnels.  We reached the offices and the door slammed shut behind us, triggering an ear piercing alarm.  We escaped the room and headed for the daylight at the top of the bunker with documents in hand.  However, I could not leave without taking care of "The Butcher".  Having had an oxy dose, my mentality was in no place to run away from such conflict.  I told J to return to HQ, and turned back into the bunker, revolver in hand.  I walked into an overview room looking down into the underground village, stepping on a glass panel that shattered underneath me and plummeted me into the streets below.  "The Butcher" toyed with me, before swinging the axe into my shoulder, making me drop my rifle.  He pinned one arm to the ground before slicing my ring finger off.  I managed to grab my revolver and shoot him in the leg.  I tied him up, fooled him into telling more about him and the "brothers" he has, before using his own ax, and chopped his head off.

After a quiet week, I heard a broadcast that the security team and heads of the NHR were evacuating to find research elsewhere, but I decided to stay. Instead of disbanding the group, Dr. Nilsson gave me the task of building the NHR here and continuing the research, which I will gladly do.

Leading the charge in researching the virus and the strange new gas, my friends, family and many others were tasked with saving this region.  To which we did everything we could, however, many died, and many fled after evacuation pulled many of the survivors to an area near Russia called CHERNARUS.  I stayed behind to continue with my work alone, determined to keep the region as safe as possible for when society begins to rebuild, and to keep anything developing from leaving Nyheim.

Seeing many familiar faces coming back to the region, Dimes, Rose, Nat...most of the people who left...most of them, brought back all the memories from before they left.  The good ones and the bad ones.  With them though, came new trouble.  On one hand, The Maker, it followed them to the region, causing hallucinations of sorts, along with hordes of infected.  After I had experienced it first hand with Dr. Jac and Elroy, fighting through hordes of infected running to find help.  On the other hand, this Red Winter group.  As soon as their leader, Archie, threatened my work, I knew that he and the rest of them would be a problem.  More and more small problems arose, hindering the progress until Milo, a newbie to the region, gave me news that would give my work a big boost of progress towards a vaccine.

With newfound friends and enemies, work is picking up again, a feeling I am not entirely used to.  There is conflict brewing, and with conflict means bloodshed...war is coming.  I hope I can avoid as much bloodshed as possible, but, I will spill blood to secure the future of these peoples lives.

Archie was dead, but it was Milo that killed him.  I was so close, I was a minute away from reaching the container Archie was being held in...but Milos' itchy fucking trigger finger ruined it.  The things I had wanted to say, had wanted to explain and tell Archie that he was wrong and his ways were wrong, but now I never will.  My anger could be contained and I stomped Archie's skull in, even though he was already dead.  Milo's excuse was that he was taking the heat from me, that they'd target him so that I can do my work with zero interruptions.  I had to understand because what's done is done, but this wasn't just about death, this was about showing that science can get us so much further than we know.  I knew what would come if I killed Archie, I was ready for it in fact.  There is no going back now.  As long as work with Dr. Jac...Crow...huh, I still can't believe he lied to me about that...as long as our work can go onwards.  We have a date with PLIKT, it's time to get answers on the gas AND the virus. 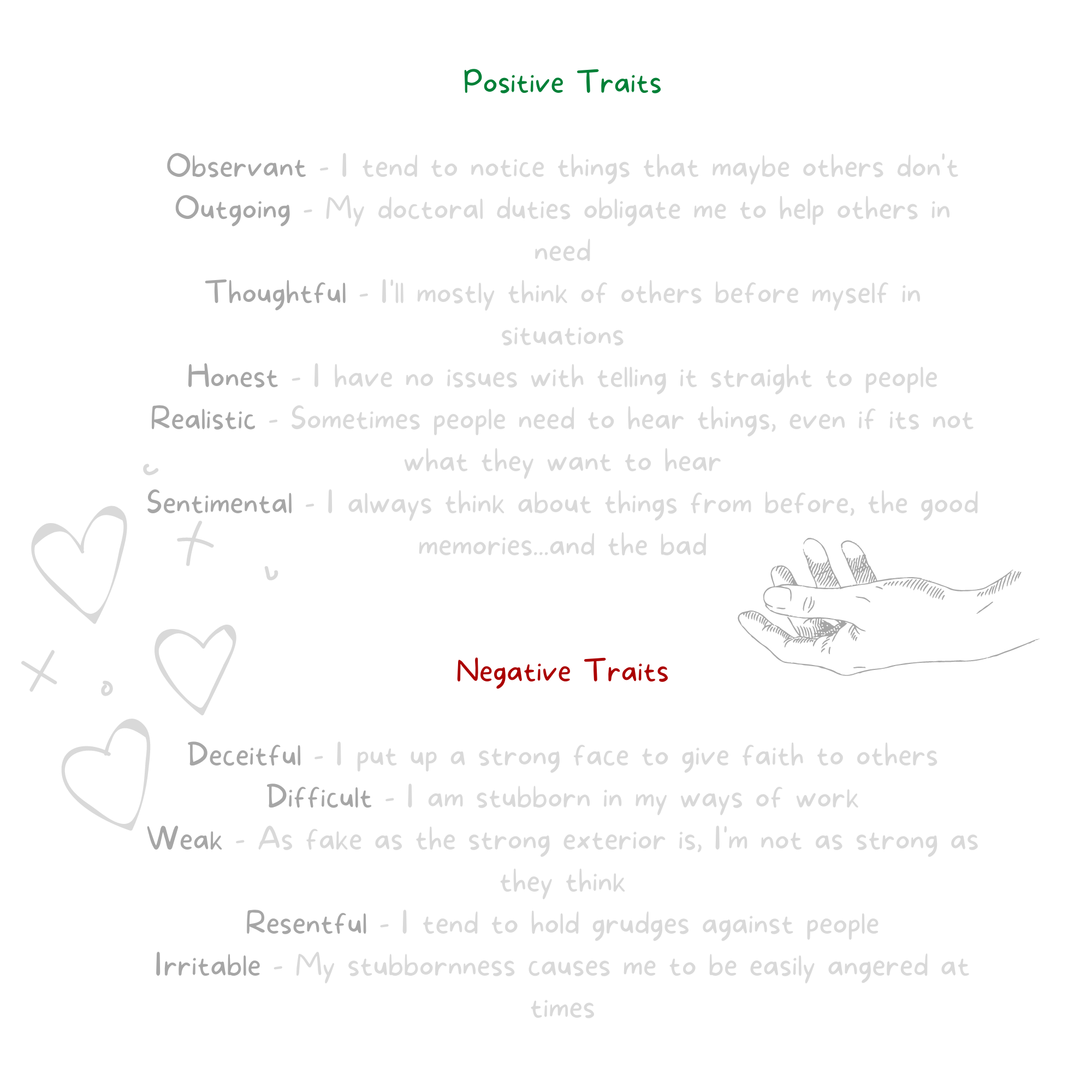 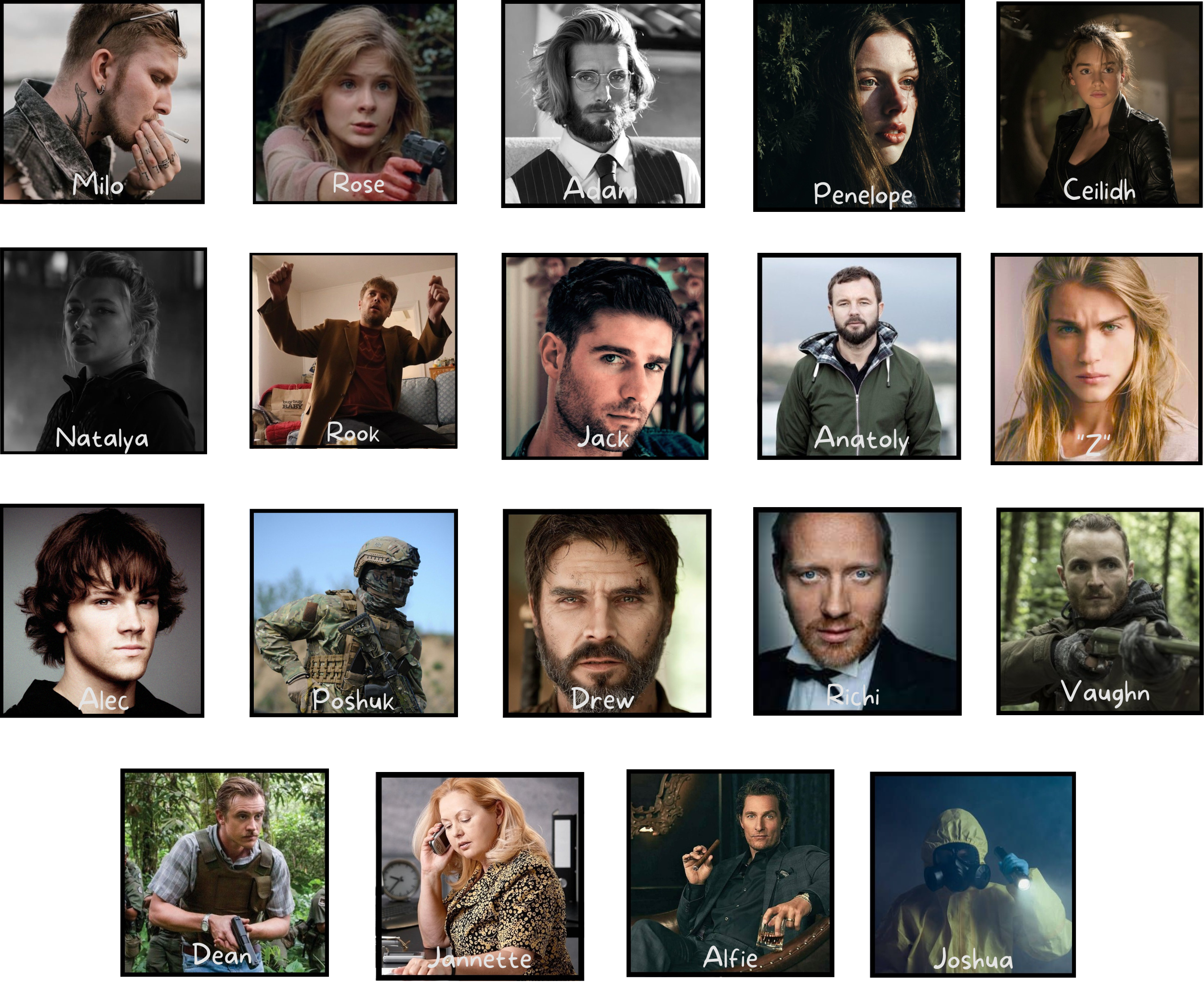 Didn't know you much...im sorry I failed you

Discover the whereabouts / fates of her old NHR team
(Dean, Adam, Dr. Williams, Vaughn, Elles)
"After everything, thank you for what you did back then and now...you've done your job.  I love you all."

Tell Walker about her feelings
"I loved you, and it was you that killed me in the end...I'll see you in Hell you piece of shit."

Relieve herself of the grief she carries with her
"This is my payment for leaving, go on without me now..."

Rebuild NHR
"Goodbye...but it's me leaving you all now..."