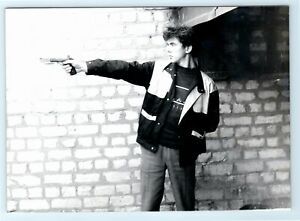 When I was 25, I went back to my city of birth, to Moscow because I had to for a military mission. When I saw the most beautiful girl I have ever seen, little did I know this girl named jane was going to be my wife. We married got 1 kid a girl named kat, we even had a house in Chernarus. Our lives were seemingly perfect until jane got sick, at first she was coughing and sneezing so I thought it was just the common flu. The day she got sick she said she got bitten by a random man while going home from work. The next day her hands were full of blood she was coughing up. I knew this was bad so i called a doctor to come over, he said she had a case of the common flu and I just wasted his time. I knew this was something very different than just the common flu. I held her hand for the whole night when suddenly, she attacked me. She didn't respond to me, she just groaned. When suddenly I heard explosions and people screaming outside. I knew it couldn't be a coincidence. I pushed Maria aside and took Jo (now 5 years old), we were getting the hell out of here. I felt heartbroken to leave jane alone but she wasn't jane anymore and her condition looked like the one the newspapers were talking about. While leaving, loads of people were roaming the streets and I felt kat grasping my arm very tightly.

6 months have passed since the outbreak and me and kat went back to our old house in Cherno to loot the place when I heard something groaning in the kitchen. It.. it was jane... she was almost unrecognizable, but I just knew it was her. I couldn't see her like this and gave her forehead one .365 bullet. After 6 months of the outbreak, you just harden up inside, but jane started making me softer so I made it stop, I couldn't take it and started crying over her corpse and fell to sleep. When I woke up, kat was gone and finding her has been my main goal since all of this happened.