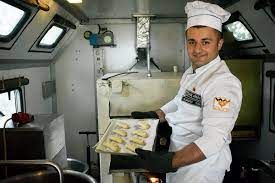 Kirill Dallashnikov was born outside of Moscow in 1982. Dallashnikov set out to find like minded people who still believed in defending and sacrificing to uphold his motherland, Russia. Times were tough, but Dallashnikov was able to fend for himself to survive these brutal times. Some of his comrades had told him about Nyheim and how many people were there. Dallashnikov set out and when he arrived he noticed the state of the city. There were soldiers in Nyheim that he fought for previously and decided to take arms with them.