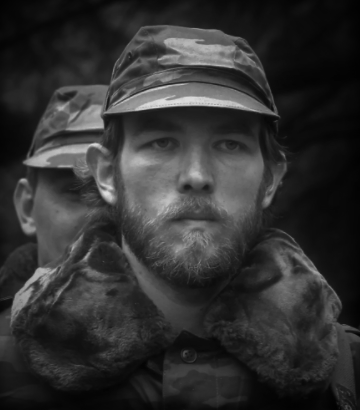 Nesterov would start his life in the bleak back-alleys of Novigrad, the capital of Chernarus. Given to an orphanage in a
hand basket, a note would be attached to it with some tape. "Life I cannot provide for, may God forgive me, from Balota." With
a shallow story and a name provided for him by the taped-note, Nesterov would start his life away from any bloodline or true
family. Growing up in an orphanage gave Nesterov a rocky start in life. Early on he would have a distrust and disliking to any
formal education, and would prefer outer-city expenditures as his true calling.
Alas, the years passed and faded, and Nesterov was never taken in by a family. Nesterov had grown into a very
pessimistic brat. Making of every situation a pitfall for himself to fall in, and forcing himself to be very melancholy. After the
civil war in Chernarus, even though not truely attacking the capital, economic shock would hit the more destitute and poor
neighborhoods of Novigrad. As Nesterov traveled the lonly streets away from the orphanage, at the age of 8, he would
happen upon a poor old man turned begger. Nesterov, as the brat he was at such a young age, wouldn't respect his elders.
Bad language and insults would be fruitless though as the old man would give Nesterov his only peice of bread left and some
rubles he had collected. "You have a life ahead of you child, even if you don't beleive it."
He had never asked for money or bread, simply put he was an asshole. This old man, however, in his deperation
and poverty gave even though it was too someone meaner and crueler to him. Even though Nesterov walked home with the money,
this event would stick with him. Slowly overtime he would begin to change into a nicer person and soften up to more and more
around him.
At 14, still growling at the education he had to attend, Nesterov would put himself in some simple jobs. Through these
he gathered some small paychecks. The money he did earn would go to keeping himself alive and donating charities. He would
keep up these low-level jobs as he got older. Soon enough he was 18. Any thoughts of what he wanted to truely persue would
chaotically dissapear however as the Russians were invading. Taking a refugee-filled plane out of the country, Nesterov would see
his country that he took for granted enveloped in the flames of war.
Now in Europe, specifically in Norway, Nesterov would be making a new life for himself. Ignoring the ongoing pandemic,
as the people around him also did, they partied, drank, and lived on simple jobs and simpler welfare checks. Soon this life would
die out as their was news of trucks spraying the streets of the Northern town where he lived. When the insane people started to
fester out onto the streets and most society started to break down, Nesterov decided it was time for him to leave oncemore.
Taking the half-working lada he owned, Nesterov started to plant a course so far north no danger could possibly even live up there.
Nyheim would be his destination... Perhaps he would find a safe spot to make refuge at...