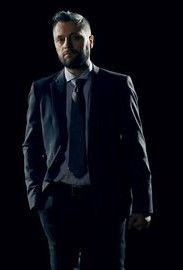 Joseph was born into an Irish American family in Hell's Kitchen, New York in 1995. He was brought up with by a very strict and abusive father who tried to shape him into a miniature version of himself. His mother died to pneumonia in 2005 when Joseph was 10. By this time, he had started to suspect his father's occupation and came to discover he was a hitter for the Irish Mob. In his teenage years his father made him drive getaway and do favours for the O'Rourke family. Joseph and his father quickly gained notoriety in the family and when Joseph was 18 he was offered the chance to be a made man. He couldn't handle the pressure of the mob life so he turned down the offer and tried to go on the straight and narrow.

Hearing about a vacany from his friend in a stock brokering company, Joseph asked a favour of the family and was given a good position with a more than comfortable salary. Life was good for him apart from the occassional street fight he would get into. But Joseph was making money and having fun, regardless of who he scammed to get there. Nearly a decade into his career now, Joseph was a highly respected member of the company who was known for his charm and manipulation skills. When he heard talk of the pandemic in Norway, all he saw were dollar signs. His company sent him to broker a deal with the PLIKT and medical practices around the area to try and monopolize the sickness.

Arriving in Nyheim, Joseph was given a complimentary apartment in the downtown district, and he slept like a baby despite the poor quality matress, because he knew he was going to make himself rich. Joseph woke that night to gunshots and screaming, he quickly darted out of bed and looked out the window to see fire, corpses walking in the streets and poor unfortunate souls being sent to their graves. In a panic, Joseph threw on the nearest clothes to him, his suit, ran out the back of the apartment complex and darted into the woods. Hopefully his life experiences will suffice for his journey into the apocalypse.