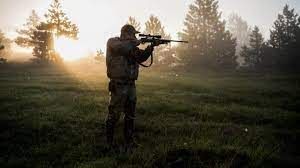 Jeremy was working off the coast of Norway as an engineer on a supply vessel. The ship was sent out to rigs to provide support and whatever supplies it needed. His contract onboard ha been extended due to the ongoing pandemic but his vessel had to resupply so it headed for the nearest port of Harstad. Unfortunately for the ship their radio equipment had suffered damage that needed a part that wasn't aboard the ship so they planned on fixing it on their next port call. Upon arrival to Harstad waters they found total chaos with multiple people attempting to board their ship from small inflatable rafts and people talking of a mass vaccine and violence. An armed group got aboard and stated it was now in control of the vessel shooting the captain as a show of force. This caused the rest of the crew and people who had boarded to panic, the crews response was to launch the rescue craft amid the panic an escape causing more shooting an leaving Jeremy the only one alive. The craft only had limited fuel so Jeremy had to dich it at the nearest part of the coast possible and begin his journey in land using his hunting techniques to live off the land and avoid populate cities.