Edward J. Richards was born in the early nineties in the outskirts of New York City. He was the first child of his parents James Richards and Katlyn Miller. Edward life was pretty normal in the first couple of years. His father was a employee at IBM global located in the WTC in New York City. His mother however was a teacher at a local elementary school. Edward had no issue's at school and continued to learn new things.

Time passes and in September of 2001 he realizes life isn't that friendly. He was in a school bus traveling to a school excursion and had a fun time. As he eats his sandwiches on the ride he notices a plane flying dangerously close to the New York skyline. A large explosion occurs and he realizes that the plane crashed into the WTC in downtown Manhattan. He tries to asses the situation, he attempts to put the puzzle pieces together. Knowing that his father is a employee at IBM global located in the WTC he panics. The whole school bus was shocked by the 9/11 terrorist attacks. The teachers secured the children and returned to the school where he met up with his mother. They were both in shock but fortunately his father and her husband stepped into the doorway glancing at them.

From that point on Edward realized he want to serve his country. He wants to prevent any future attacks on the United States. His parents are against this and try to talk him out but he is hesitant. Time passes once again and at the age of seventeen he joins the military, After a half year of military training he becomes a combat engineer and deploys into Afghanistan, Korangal valley in the Kunar Province. He got deployed for 12 months and in those months he further developed his engineering skills and gained experience in combat situations.


After 12 months he returned home going back to his family. After a break of one and a half year. He decides to return back to Afghanistan and go on a deployment of six months to conduct security checks near the Pakistan border. After a six month deployment he returns home safe and sound. Years pass and Edward still serving in the USMC goes out on several deployments.

Eventually It's May 2017 and tensions are rising in Chernarus. Ultimately the violence led the State to declare martial law in South Zagoria on May 3rd, 2017. The province was gripped with fear and tension and some citizens left to go to western areas that were considered to be safe, their belongings and vehicles left behind to rot, for fear of another civil war. However, the attention of the world was focused elsewhere and not on the developing situation in Chernarus. NATO presence begins to increase in Chernarus, and Edward and his unit get called upon to do their duty in the post soviet country. Thinking it's just another peace keeping mission he doesn't worry about it and deploys out.

Weeks pass and the whole country is in chaos, a virus broke out infecting everyone in it's path turning those who are infected into a state of utter rage attacking everyone on sight. While fighter jets fly over the region dropping off payload after payload to halt the growth of the infected. Edward and his unit weren't prepared for this and Edward together with some other NCO's decided to make sure their enlisted safety is at highest priority. Scavenging what they could they decide to move out towards the coast to attempt to get out of the region and hopefully regroup with any US navy vessel off the coast of Chernarus. Another week passes and after numerous attempts to reach anyone they realized they are alone. With food supplies running low the group decided to do scavenging hunts around the towns and villages. Having no experience with the infected threat many soldiers get infected. Eventually ending up in a small squad of eight men the group decides to head north into the woods and towards the airfield to obtain a way of transport. After a couple of days they arrive at the airfield seeing it turned to turmoil. They decide to split up in team of two and start looting the remains while maintaining radio contact. They regroup after a while to discuss what they found, suddenly a sniper rifle shot can be heard in the distance and Edward falls down onto his stomach. The others scatter but slowly get picked off one by one, fortunately one of the soldiers managed to throw a smoke grenade and drag Edward into cover, where he then left to get the other. Shots ring and after a heavy fire fight it remains quiet. Edward manages to stabilize himself and radio's the others he gets up and walks outside stumbling upon the blood bath. His remaining group members shot and being torn to pieces by infected.

Being the only known survivor of his unit he goes out on his own. Living in the forest surviving off the wild life sometimes looting the villages near tree lines. He roams around leaving no trace, eventually he notices a radio transmission from a unknown group so called the "S.T.A.L.K.E.R.S" He decides to head out and find this group to maybe reunite with other survivors.

Edward eventually finds the stalkers, he hangs out with them and make some good friends although eventually decides to leave. The group wasn't what he thought it was and eventually after having contact with other survivors he decides to move out again. In search for others he eventually hears about a group consisting of NATO 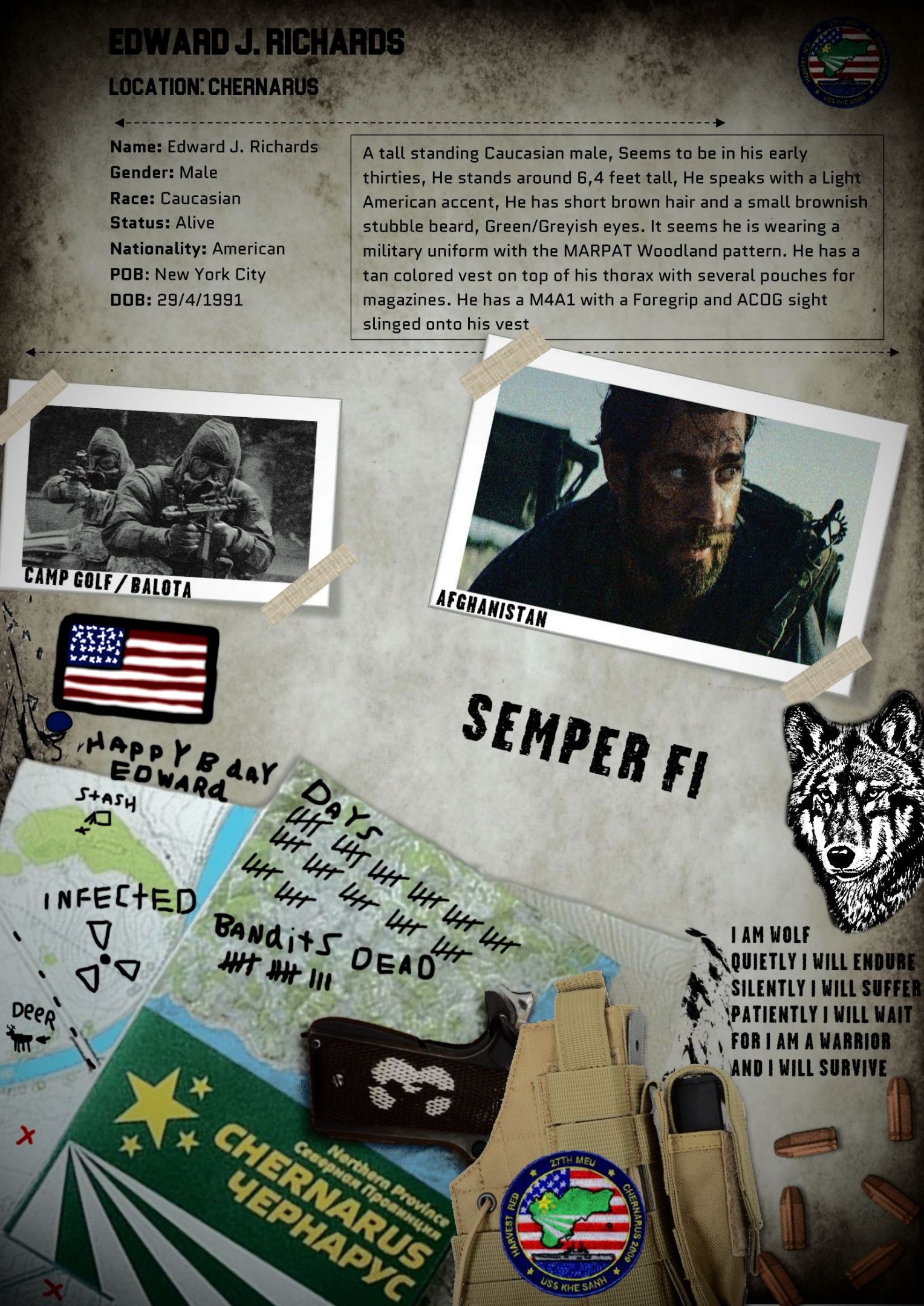