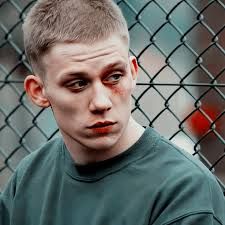 Jordan Johnson was born on February 7th, 1992, his parents were alcoholics so growing up he spent most of his days at his grandfather's house, while there his grandfather would tell him stories of when he was a Marine in the Pacific, fighting the Japanese. These stories, combined with his own curiosity drove him to join the Army in 2010. He served a single deployment to Iraq between 2011 and 2012 as well as two tours in Afghanistan between the years of 2013 - 2014, and 2015-2016. He decided he would stay in the army for as long as he could, he enjoyed the order it brought to his life and the friends he made.

He was in Europe when AVM-FLA-19 rocked the continent, the violence, the looting, the infighting, eventually drove the Lewis and the American battalion he was with north Rena camp in Kavaleriveien, Norway. Along the way, his Helicopter crashed in Nyheim, he was the only survivor.

With nothing but the shirt on his back and few scraps of food and water, Lewis set out in Nyheim, to find an old friend of his.
×
×