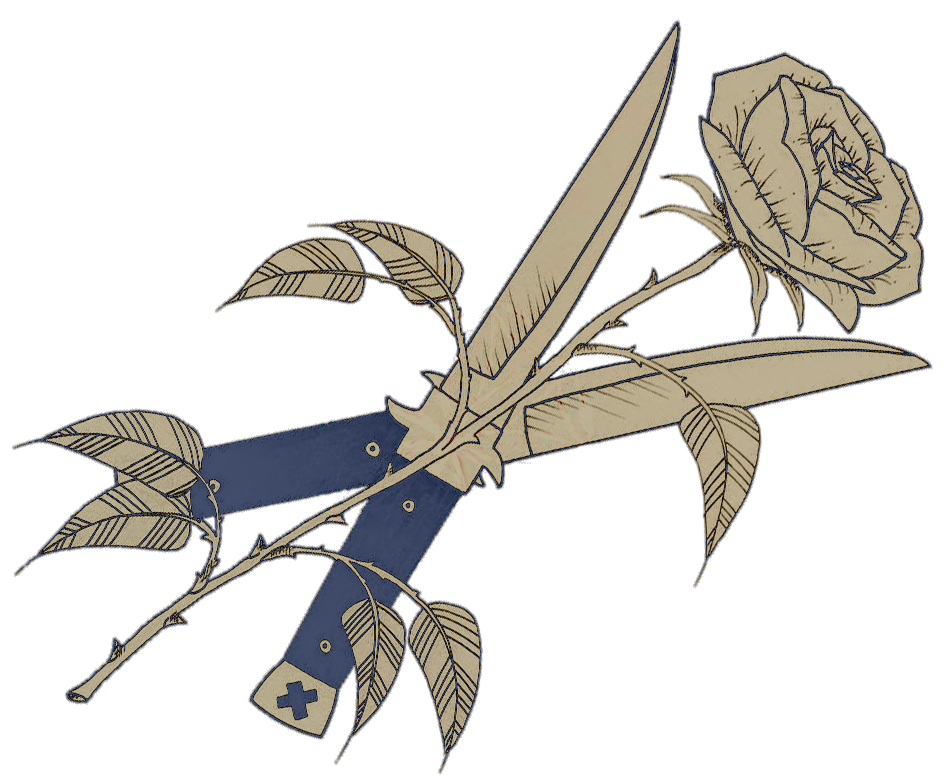 Raine sat cross-legged as she flicked the lighter for what felt like the tenth time. She sighed as she cupped her hand around it to try to keep a flame for more than a second. It flickered and then quickly went out, leaving her in darkness once more, but not before she inhaled the familiar taste of nicotine. She pulled on it slowly, relishing the burn in the back of her throat before releasing a puff of smoke into the night air.

“Hey,” a gruff voice suddenly spoke from behind her. “We need to get moving. We’ve been here for too long now.”

Raine frowned as she continued to puff on the cigarette between her lips. She let out another sigh as she stood up and flicked her cigarette to the ground, tapping on it with her foot. She gave a small nod to the man and followed him into the darkness.


The girl ran as fast as her feet could carry her. Behind her, the footsteps of the dead could be heard pattering against the ground as they gave chase after their next meal. She’d been running for a while now, or at least so it felt. With her heart pounding inside of her chest and sweat running down her forehead, she sprinted throughout the city of Novodmitrovsk. If she didn’t get away from the infected now, she’d be dead in a heartbeat. The girl laid her eyes upon the apartment buildings and began to make way toward them.
As she ran into one of the apartment buildings, she hit her shoulder off of the frame of the door and let out a small yelp, holding it with her other hand. She climbed the stairs, panting for breath. As she reached the top of the building’s staircase, she pulled a heavy metal door open and ran out onto the rooftop. The door slammed shut behind her and in that moment, Raine dropped to her knees as she tried to catch her breath. She laid on the rooftop as the adrenaline wore off, now finding herself a sobbing mess with the only sound the banging on the metal door.

A day had passed and she still didn’t know how she would ever get out of this place. On one hand, she was safe and wasn’t dead in the middle of a road being torn to pieces. On the other hand, how long could she stay on this rooftop while the dead fill the apartment building inside?

In the middle of the night, Raine awoke to the sound of a single gunshot ringing out throughout the apartment building complex. Her heart racing, she stayed laying down on the roof while her mind began to race too.
Time passed and eventually she heard another gunshot followed by a door slamming somewhere to her left. She positioned herself into a crouch and made her way over toward the edge of the building, barely peeking her head up to look at the apartment building next to her own.
There stood a man, swearing and cursing himself as he looked around in a panicked state.

No way. No way in Hell did her only chance at being rescued just find himself trapped, too.

The man whipped out his flashlight and began looking around. Eventually, the bright light fell perfectly on her. Her eyes widened as they both stared at each other in complete shell shock.
Eventually, though, after a couple of days they got to talking. What else was there to do while they were trapped with dozens of infected trapping them on these rooftops?

“Hey, so…” The guy spoke with his Southern American drawl. She looked over toward him as she sat next to the edge of the building. “What’s your name?” He finished.
She gave a small smile and let down her guard for once. Typically, Raine would’ve gotten defensive at the slightest bit of friendship. They were probably going to die anyway. Why not?
“Raine.” She spoke back across the buildings.
“Ah,” he responded. “Well, I’m gonna call ya Foxface. You look like a Foxface.”
She stared at him, puffing her cheeks out in annoyance. Was that meant to be an insult?
“And? What’s yours then?”
He paused and looked at her, giving a coy smile. “Wardaddy.”
Right. This bastard was really going to be sus as hell and not even give her a name? It’s the end of the world, dickhead. What do you have to lose? Still, for whatever reason, she played along.
“Okay, Wardaddy…”

“So, Foxface. Where are you from?”
Raine lifted her head from where she was resting it against the wall of the rooftop and let out a small sigh. Wardaddy had probably been the only person she’d gotten close to in a long time. “Uh..” she said, her voice cracking. “Vermont. A little place, lots of mountains and other bullshit.”
“Ah, okay.” There was a pause for a moment. She glanced over toward Wardaddy who was eating something that looked like an MRE. Her stomach growled and she went back to resting her head against the wall, eyes tired and weak.
“Pretty far from home, huh? How’d you end up in this shithole of a country?”
“My parents and I never had much. I wanted to make something out of myself. I wanted to see the world. I got an offer here, and… I don’t know. I took it. I thought I could help my parents.”
Wardaddy paused and looked over toward Raine.
“You don’t have anyone here?”
The girl frowned, pausing for a moment before slowly shaking her head.
“No.”

5 days had passed at this point. Raine had just run out of water and the two were running low on food. Wardaddy said he had friends in the country, Xander and Lucius. They knew he was heading toward Novo the last time they spoke, but his radio since died. At this point, they were their only hope to get out of this situation.

And, eventually, they came through.
On the streets below, Raine could hear the voices of a Scottish man and Boston man. The friends exchanged some hushed conversation so as to not disturb the infected and then took a couple of attempts to toss a rope up toward the roof of the building. Finally, Wardaddy was able to catch it and he made his way down to the ground. Next, Wardaddy repeated the process to help Raine escape while Xander & Lucius took care of a few infected who had wandered around to the back of the building where they were.

Since then, Raine had stayed by Wardaddy’s side and continued to survive along with him.

➤  Revolver
➤  Joker And The Thief