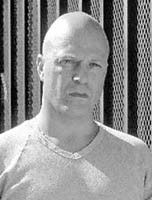 Kricket was just the common street thug of Nyheim. He never paid much attention to what was going on in the world so long as he was making money. He likely never really knew about the virus until it was too late. Too late being that he was in prison with murder, homicide, and drug possession charges. He noticed something going wrong when the guards left the inmates to die. It was by some sheer miracle that an inmate made it out and unlocked the gates and let them free into the broken new world.