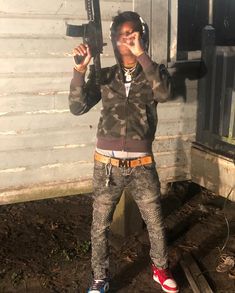 Riggs was just a child when he had to grow up. Riggs grew up in an abusive household, his mother a prostitute and a drug addict. His father was barely in his life, and when he was he was probably completely fried. Riggs, at the age of 8 years old saw a construction worker come into the house. Riggs asked "Who are you?" The construction worker looked at him and said "Fuck off" the construction worker kicked him to the ground than stomped on his face. For the following week Riggs had a giant boot mark on his face. When Riggs turned 11 he started hanging around with some people from the Blood set 29Street. He jumped in randomly one day on his way back to his house. Riggs started out doing the dumb stuff. Car popping, selling little dime bags of weed, etc. It then turned into something a bit more extreme. Dealing bulk amounts of drugs. Riggs, with all his money, decided he would buy some weaponry. He bought a baby AK with a switch.

7 years later, Riggs got the opportunity of a lifetime. He had set up a deal with a local crime family. He would be selling two pounds of weed and five grams of coke. The deal would take place at a local park. He got his friend Krance to come. Krance had helped him on the come up. He parked his BMW about a block away from the spot, grabbed his baby AK and the backpack with the drugs in it. He gave the baby AK to Krance, he put it in his sling bag as well as his sawed off double barrel with zero words spoken. They  collected themselves, and got out of the BMW. Krance decided he was gonna stay at the other side of the park in case shit went south. Riggs continued on with the bag towards the park. Upon arrival he saw a newer Mustang. The guy in the driver's side of the Mustang daped Riggs up and said a single word quietly and softly "bathroom". Riggs walked into the bathroom and saw 3 guys, they said wassup and dapped him up. Riggs says "You got the bread?" the guy in the middle said yeah and the guy on Rigg's left whipped out a pistol. He said, "Drop the backpack." calmly. Riggs was thinking "I knew this wasn't gonna be good". The man on the right grabbed the bag and pulled the massive bag of bud out. He says "YOOOO, this is more than I expected" than smiles at Riggs. The guy in the middle says to Riggs, "Go, now" he goes to walk away, the man in the middle says "Wait, gimme your phone." Riggs said “Fuck nah!”. The guy on the right pulled out a 12 gauge from behind the sink and cocked it. Riggs handed them his phone. The guy then smashed the phone on the ground. Riggs left the bathroom hopeless. The man in the driver's side started the car, made eye contact with Riggs, and looked away with a smile.

Riggs was pissed. He knew what had to be done. He casually walked up to Krance and gave him that look. Krance slung the bag off his back and handed him the AK. They ran up to the car and spotted all of them outside of it carelessly smoking. Riggs took the first shot at the guy with the 12 gauge. He split his head. He saw Krance pop out behind them and shot both shells at the guy with the pistol. The guy who used to be in the driver's seat shot and killed Krance. Riggs saw and started mowing. He killed all of them. He ran up to their bodies and curb stomped the guy who smashed his phone. He ran up to Krance, looked at him shocked. Riggs knew he had to run to his car.

He got back to his house, he looked at it, and thought about his mom. As much as she abused him he still loved her, he didn't want to drag her into this. So he got out of his car and ran to the bridge which was over a river. Riggs threw the gun into the river and called his boy Noah Russo’s phone. Noah was a very loyal guy to Riggs, so Riggs went to him in need. Noah explained that there were going to be some business opportunities in Norway, so Riggs followed Noah into the unknown and hopped on an overnight plane. Now he wanders the lands with his crew

- Isn't afraid to say what's on his mind

- Hard to crack under pressure

- Will only back down in rare circumstances.

- His confidence can get him into loads of trouble.

- Needs to blow steam off often.