A former soldier of the CDF, Radek once had pride in his country and in turn its systems. Serving in the military gave him confidence, might and strength. It built him up, but ultimately it tore him down. During the 2009 civil war with the Chedaki, Radek and his friend (both serving in the same regiment) were held captive. Radek was forced to bare witness to his friend's brutal and savage murder. In a fit of rage, his friend was beaten over the head numerous times. Where he once server the CDF, it seemed they would not serve him and his needs. He was abandoned in the camp, left as a Chedaki prisoner and pretty much instantly declared K.I.A.

Radek felt alone, abandoned by the thing he had most. It broke him down, tore his mind apart. His faith in his country, the constitution and the military had failed him. His mind looked elsewhere, and once the world started to crumble he found a sudden release. He was no longer bound by societal norms, legislation or anything that resembled a country. He was free.

After months into the infection, a group calling themselves the "tinheads" found him, lead by Bogdan. An almost primitive style group, but it had one fundamental aspect that fit now more than ever: Survival of the strongest. They would pillage, raid, torture as they saw fit. Plundering each city that they passed, it was perfect for him. It wasn't easy though, raiders aren't easy to impress. Another Chernarussian member of the "tinheads", Bronislav, started a fight with him, for no reason other than fun. He wanted to prove his worth to the group. However Radek, with his military physique and training easily overpowered him, forcing him to the ground, the group watching above.

It was a one-on-one battle, Radek bludgeoning his head in repeatedly, cracking it open. Blood spurted over "Buzzo's" boots. It was an entertaining fight for them, even one of their own dying could be a thrill to watch. Seeing the potential in Radek they took him in. A lawless, relentless man is a powerful tool. Radek was never overly loud, choosing actions to speak louder than his own words.

Radek has a very troubled past and as a result he is very difficult to figure out. What people do know is that he can be cold, ruthless and at times a ball of rage. See past that, and some people have learned that he can be one of the most loyal and dependable people they'll know. He can be difficult to work with at times, but if you're on his side he will fight tooth and nail to keep everybody he cares about alive. Very few know the truth about his past or his motives, even fewer the inner workings of that.

"Vlad... the man is a complete maverick. You will never know what this man is truly thinking, to the point I get the feeling there is some ulterior motive when he claims to always have my back. Though I can't complain, the guy is the best guy I know right now. Always does have my back, willing to fight at a moment's notice. Never expected him to have my interests in mind, but it makes a nice change from the Batteries. I would probably follow this guy into death if he needed me to, and if he does stab me in the back I can safely say it was worth it in the end. He is my cornerstone."

Updated: "Vlad is the man I trust wholeheartedly. The man is dependable, I mean he even calls me his brother. I'd do anything for this man, even die for him. At first I was skeptical, now I know I was wrong to be skeptical. He is definitely what I would consider a brother."

Updated #2: "I... I don't know anymore. After todays argument I don't know where I stand. I thought he didn't have any faith in my capabilities, and when I actually tried to do everything he asked for it was shut down. Then he put a gun to my head masquerading it as an apology. Though I held my own, i am back to never truly knowing where I stand with this man now. I was told it was some sort of test... but at this point I'm glad I have allies. I can feel a storm brewing."

"Andrej... guy's a bit of a nutter. Fun to have around, dependable if you need shit to get done, always has his friends' backs. Glad he's on our side, he's enthusiastic to continue raiding people's shit whenever we need it, eager to fuck somebody up who we need to. Just a lad I can depend on to get shit done."

"Ellie... I still don't fully know why I do what I do. In my drugged up, confused state voices reached out to me almost telling me not to do what I did. I regret it ever since, as if it rang out how empty I was since I joined the batteries and got addicted to comfort. The girl is... malleable. She's got a good heart, maybe like I used to. Maybe that's why...? I don't know. I want to help her, but the only way I know how to help her is what I'm doing now. It helps her grow, and I want to see her blossom, something her friends are definitely not helping her do. I mean they didn't even try to stop us taking her. And yet despite everything it's odd to think that she might actually give a damn about me. It's like a puzzle I need to figure out."

"Katie... Vlad's girl. Not going to lie at first I had no idea what she was doing with us. She seemed way too innocent and "anti-raider" but after further thought she's literally, to Vlad, what Ellie is to me. She's kind, got a good heart, but I can see that she's got a darker side to her. Something that can be brought out if nurtured enough. Either way I like her, makes me feel slightly more normal to have her around."

"Anya... funny, likes to crack jokes. She seems a logical thinker, somebody who is always trying to do what makes sense. She has her moral ground to stand on, limited that it may be. I respect that though, having some things you wouldn't do stops you becoming a "Buzzo" who I'm pretty sure if guilty of every crime imaginable."

"Aly... good looking, fun to be around. As much as I hate to admit I got feelings for someone, I do for her. She's capable, independent and what's more important to me is the fact I don't feel like she's a damsel in distress. I couldn't handle that. She's the kind of woman I know we'd be able to fight together any day, that I wouldn't worry about not coming home one day and that I like.  It's early days, and truly I don't know how far this will go but for once I'm pursuing something for my own interests, genuine ones."

"Jack... I like this guy. Man has a spine. Dependable. Though I like him I can never figure out what his motive is. Is he here for power? Is he here for information? Because it suits him? Or is there some big scheme. I can never tell. He keeps his cards close to his chest, making it difficult to earn his trust quickly. Maybe that's just me, we have argued in the past, though not for something that would pit us against one another. I hope he sticks around long enough for me to learn the truth. He's a worthy ally and I hope one day, friend."

"Sebastian... one of the newest Batteries way back when. Guy started out trying to fit in, and I called him out on some pretty sly / subtle sabotaging early on. But I think, like most, he eventually cracked, becoming one of us. All it takes is time and enough pressure and any man or woman would crack, some worse than others. He emerged a leader even when not the 'Alpha'. He was cunning, smart, almost omnipscient, until he crashed his car into a tree and died..."

"Buzzo... the definition of a fucking nutcase. I wouldn't so much call him "friend" as I would "captor". There were some admirable things about the guy, like his sheer lack of fucks to give. I'd like to be able to give fewer fucks. But he always went one step further, going from not giving a shit, to actively doing exactly what others didn't want to happen. If you had a known weakness he'd exploit it; Comfort, drugs, sex, alcohol, anything. You name it, this man will use it against you to keep you on his side. He was very wise in that sense, knowing that when he was Alpha he'd have to appeal to those who followed him. It worked, until people figured out how to make comfort."

"Nivek... fucking Nivek. The man who was always looking for some action. He and his girl got together by beating the shit out of each other like... what in the fuck? The way he'd talk about women was... distressing, but nothing like what Bogdan used to be. Whilst Nivek still had boundaries, Bogdan would use women for whatever he wanted, even against their will. Before he died I'm pretty sure Nivek's name alone had people fearing him, just for the maverick he was." 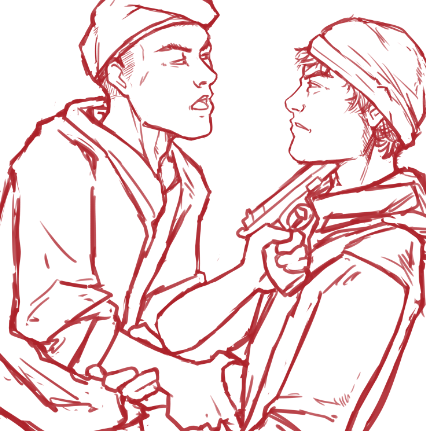 Credit to @Brayces for this amazing sketch showing the tension between Radek and Vlad.

"Fuck this guy. There's a deep depressing atmosphere circling that man, a rage bigger than my own that is going to consume anybody who opposed him. I've shot the guy before but he seemed to come back more stubborn than before. The man wants us all dead because his insane fuck-toy decided to fuck a load of people off and got fucked as a result. I'm going to enjoy shooting him again when the day comes."

"I've tried with this man. Truly... I made a mistake in the past and I regret it. But I've atoned for that sin, and this man continues to doubt my sincerity to the point he seems willing to snake us all out over Ellie. He loves her, that much is clear, but that makes him dangerous to all of us. We know at his heart, regardless of what she wants, he priorities what he thinks are her interests. That makes him both extremely predictable and a typhoon of chaos at the same time. If he doesn't fix up I'm going to relish in the day I get to kill him."