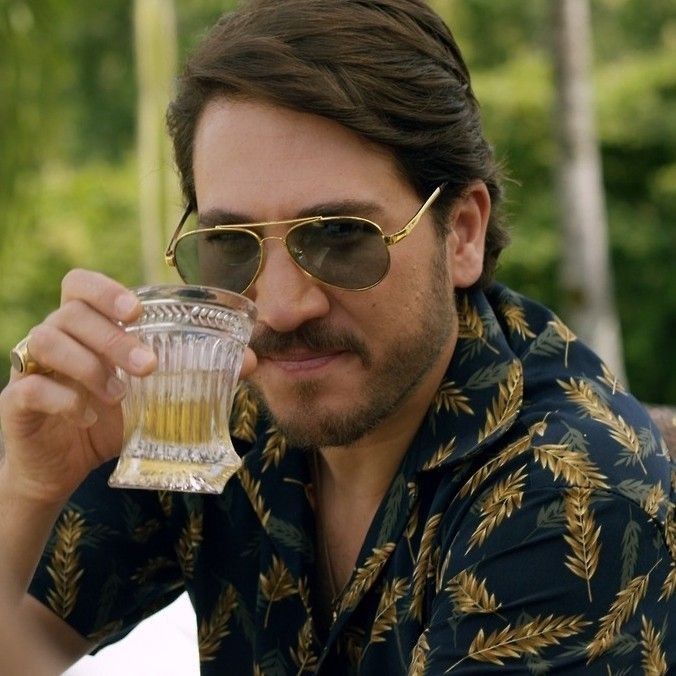 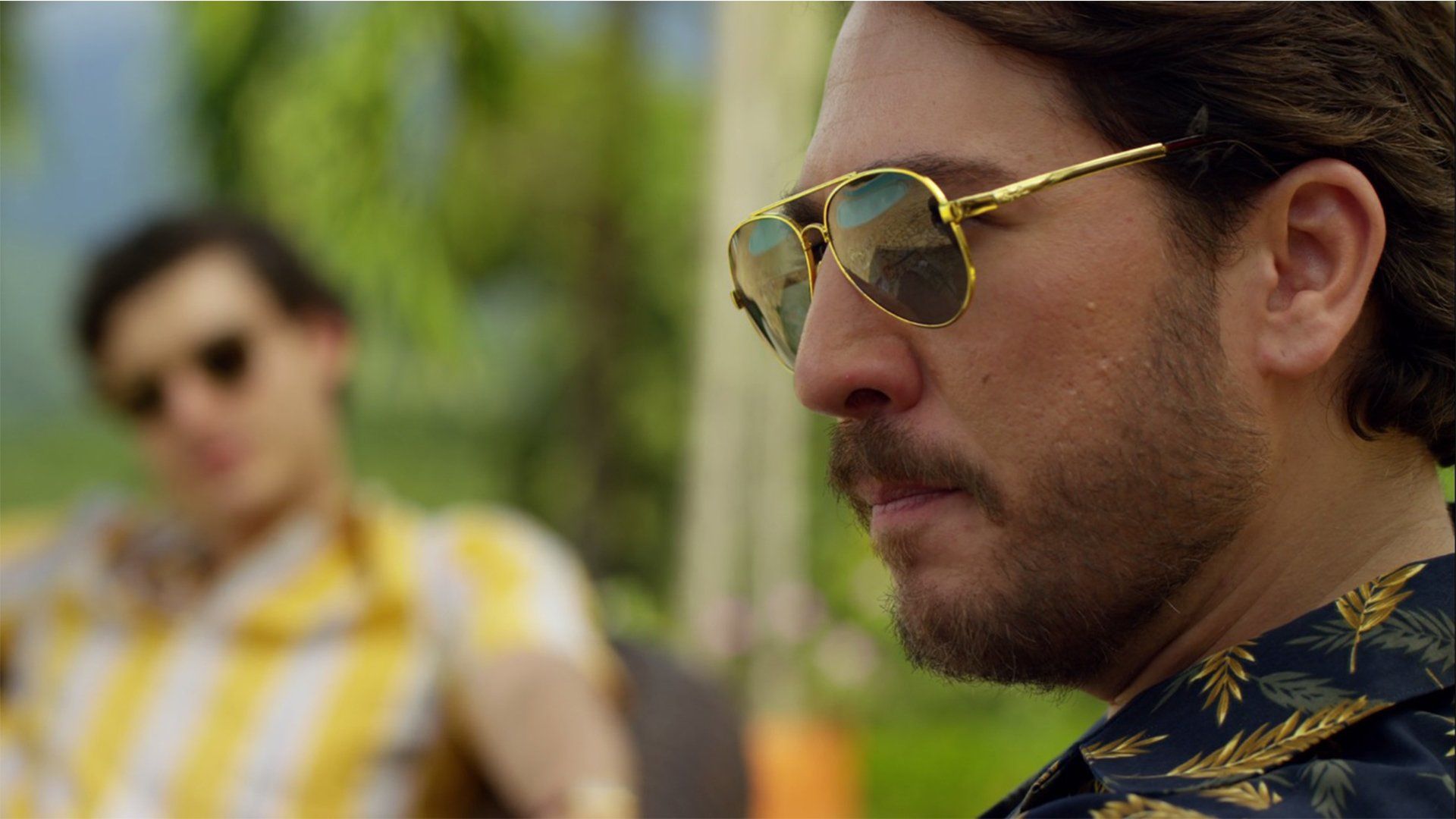 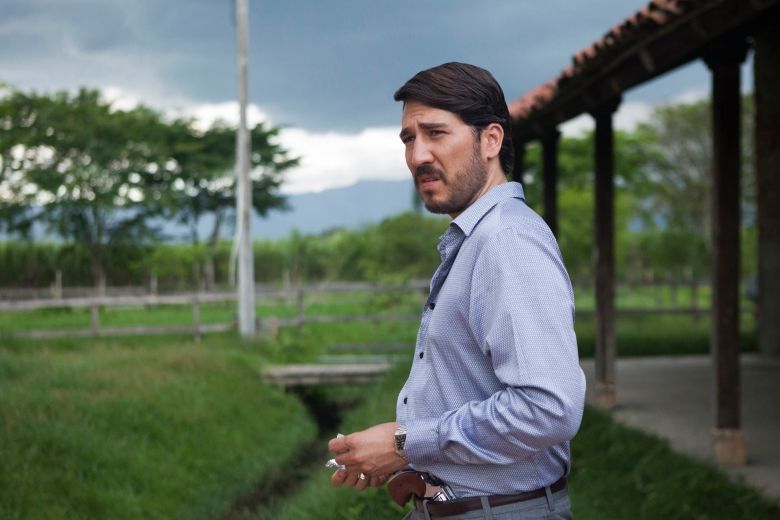 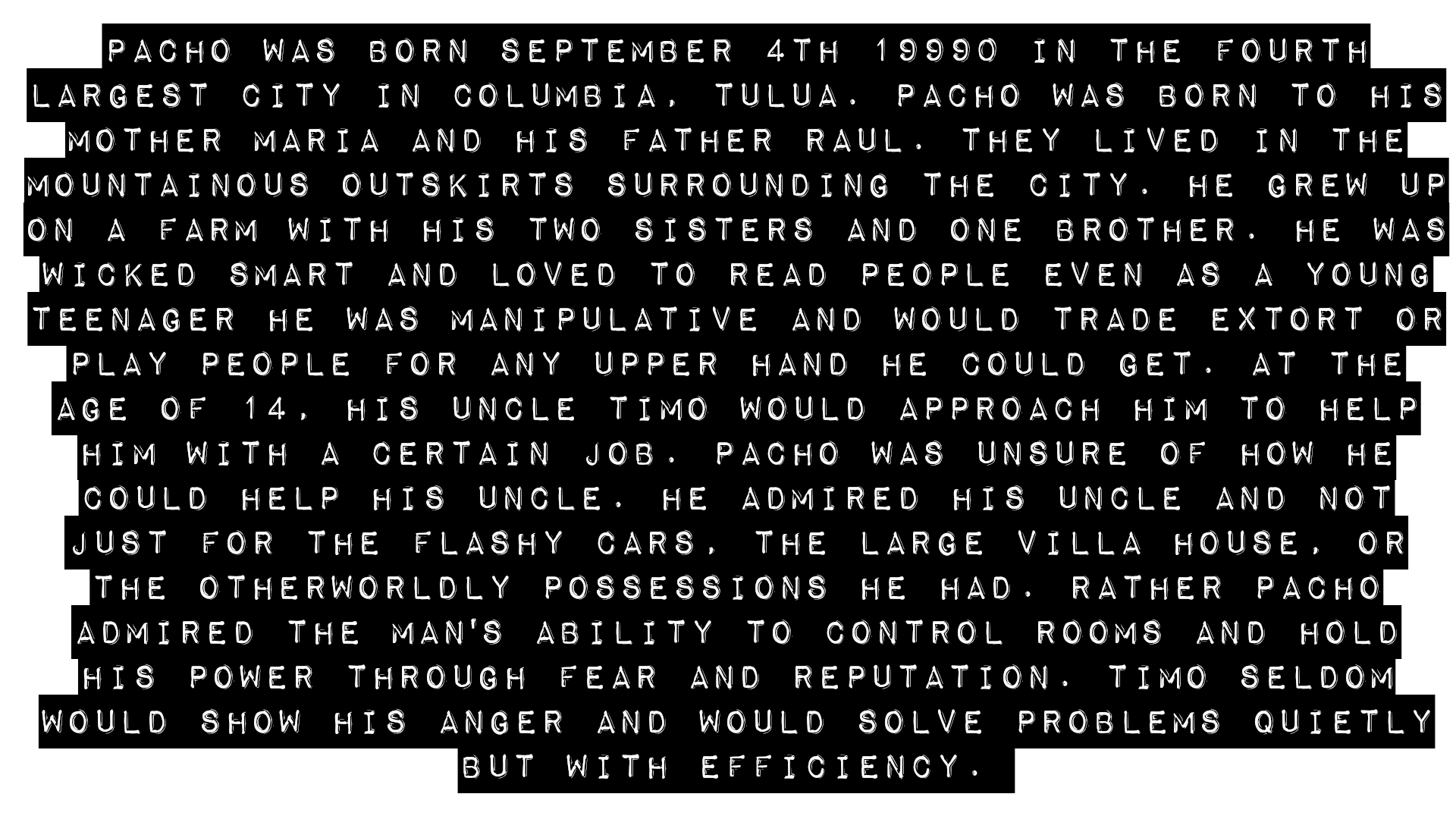 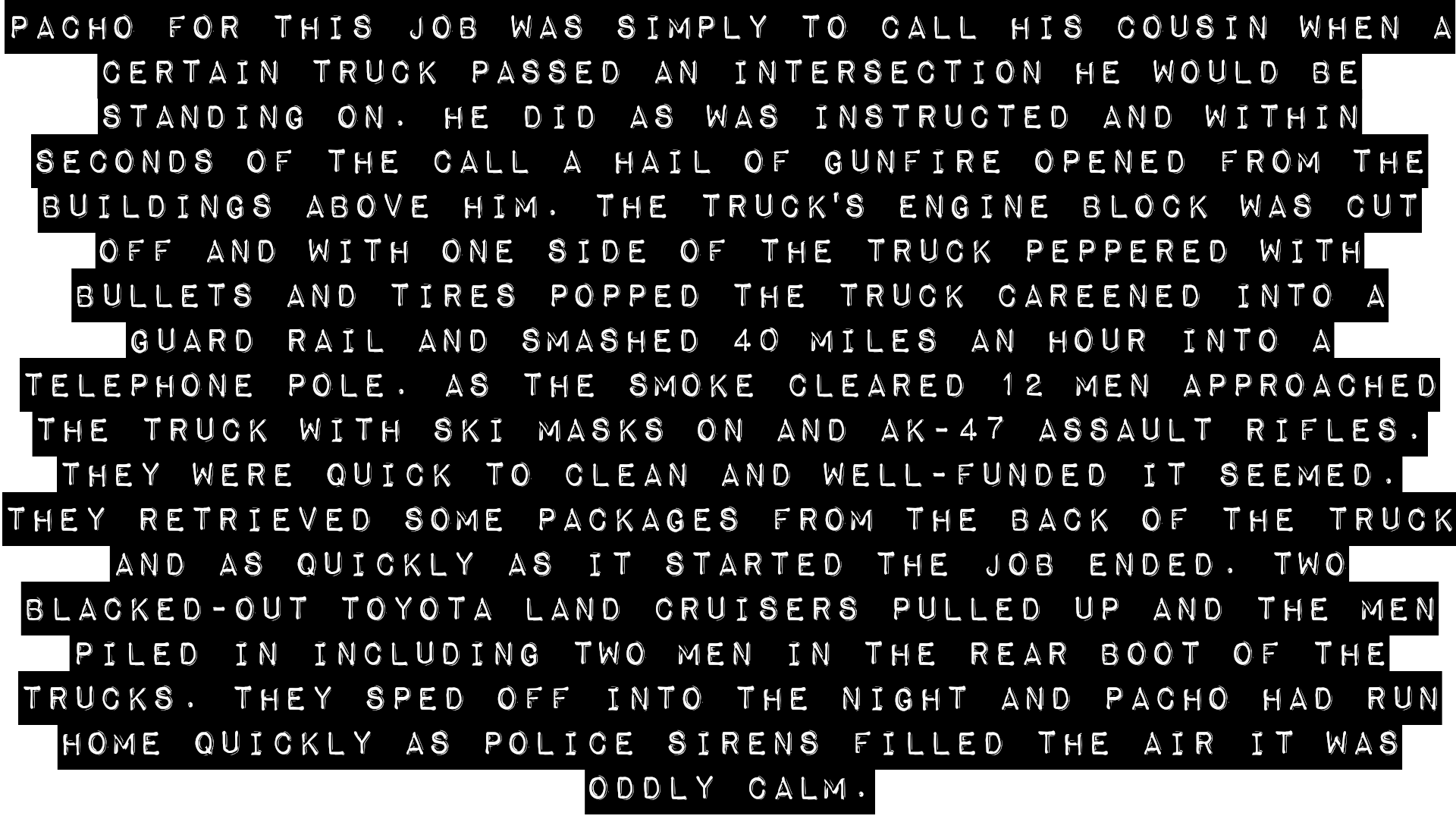 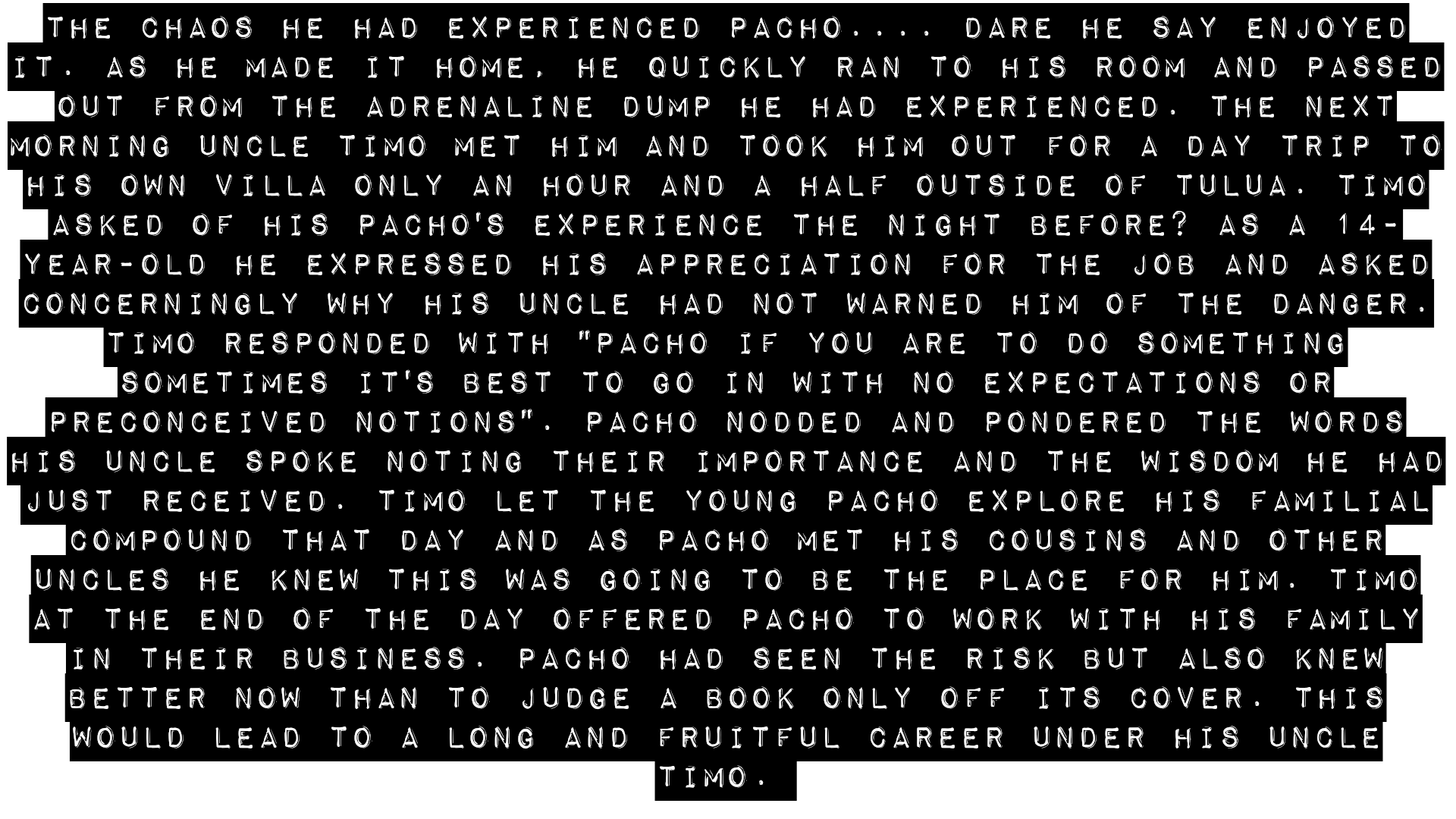 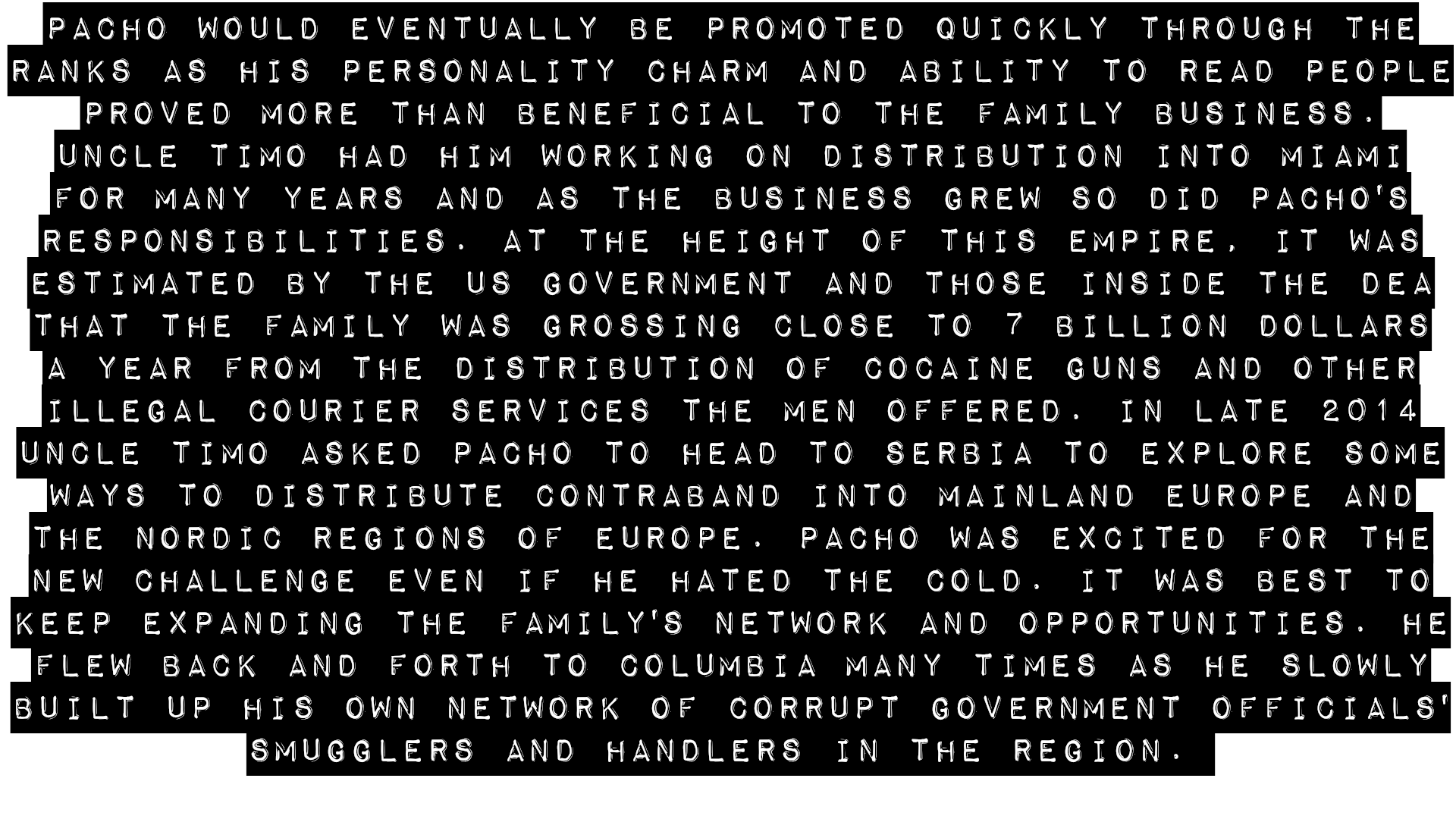 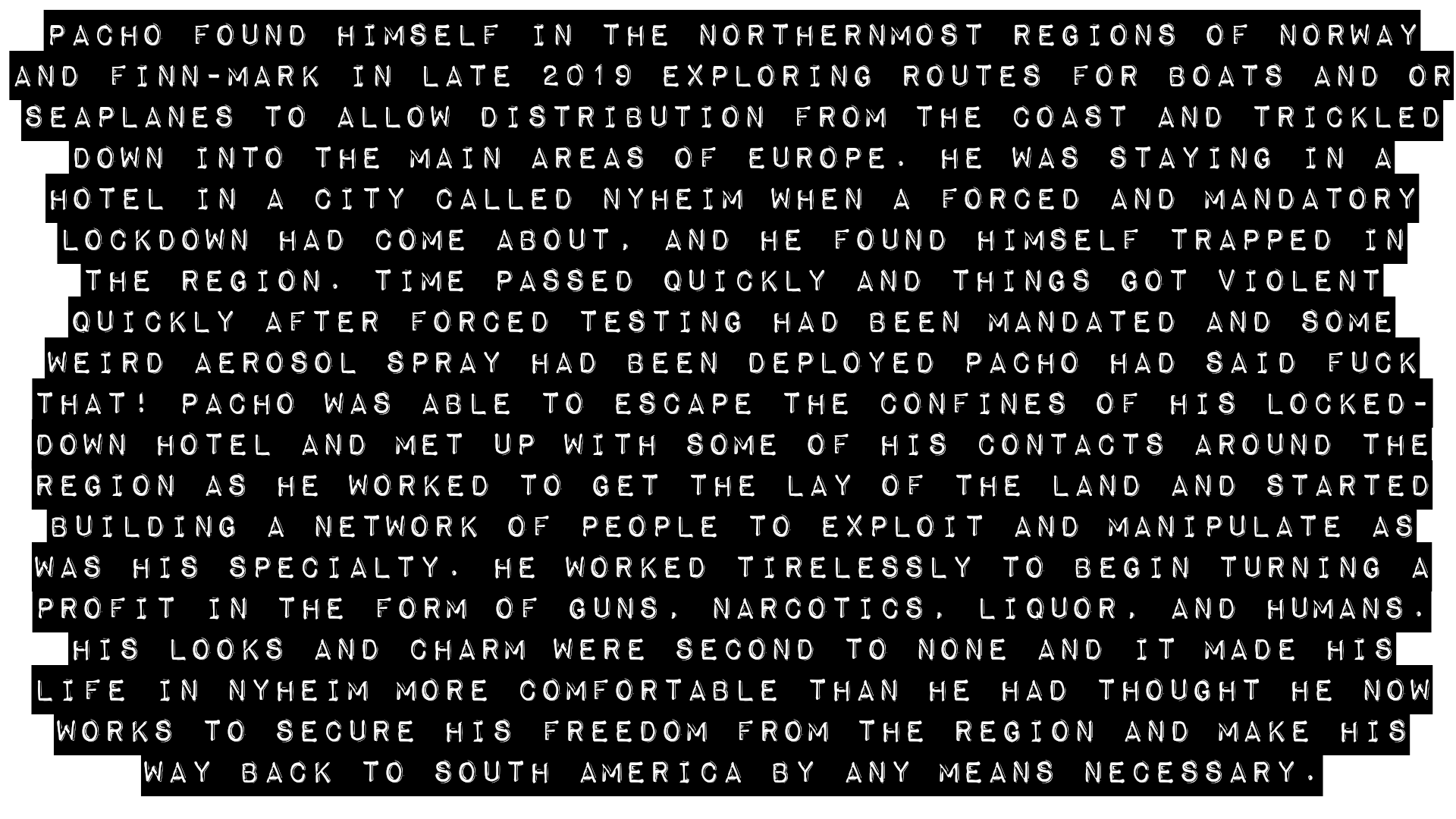 Pacho was born September 4th 19990 in the fourth largest city in Columbia, Tulua. Pacho was born to his mother Maria and his father Raul. They lived in the mountainous outskirts surrounding the city. He grew up on a farm with his two sisters and one brother. He was wicked smart and loved to read people even as a young teenager he was manipulative and would trade extort or play people for any upper hand he could get. At the age of 14, his Uncle Timo would approach him to help him with a certain job. Pacho was unsure of how he could help his uncle. He admired his uncle and not just for the flashy cars, the large villa house, or the otherworldly possessions he had. Rather Pacho admired the man's ability to control rooms and hold his power through fear and reputation. Timo seldom would show his anger and would solve problems quietly but with efficiency.

Pacho for this job was simply to call his cousin when a certain truck passed an intersection he would be standing on. He did as was instructed and within seconds of the call a hail of gunfire opened from the buildings above him. The truck's engine block was cut off and with one side of the truck peppered with bullets and tires popped the truck careened into a guard rail and smashed 40 miles an hour into a telephone pole. As the smoke cleared 12 men approached the truck with ski masks on and AK-47 assault rifles. They were quick to clean and well-funded it seemed. They retrieved some packages from the back of the truck and as quickly as it started the job ended. Two blacked-out Toyota Land Cruisers pulled up and the men piled in including two men in the rear boot of the trucks. They sped off into the night and Pacho had run home quickly as police sirens filled the air it was oddly calm.

The chaos he had experienced Pacho.... dare he say enjoyed it. As he made it home, he quickly ran to his room and passed out from the adrenaline dump he had experienced. The Next morning Uncle Timo met him and took him out for a day trip to his own Villa only an hour and a half outside of Tulua. Timo asked of his Pacho's experience the night before? As a 14-year-old he expressed his appreciation for the job and asked concerningly why his uncle had not warned him of the danger. Timo responded with "Pacho if you are to do something sometimes it's best to go in with no expectations or preconceived notions". Pacho nodded and pondered the words his uncle spoke noting their importance and the wisdom he had just received. Timo let the young Pacho explore his familial compound that day and as Pacho met his cousins and other uncles he knew this was going to be the place for him. Timo at the end of the day offered Pacho to work with his family in their business. Pacho had seen the risk but also knew better now than to judge a book only off its cover. This would lead to a long and fruitful career under his uncle Timo.


Pacho would eventually be promoted quickly through the ranks as his personality charm and ability to read people proved more than beneficial to the family business. Uncle Timo had him working on distribution into Miami for many years and as the business grew so did Pacho's responsibilities. At the height of this empire, it was estimated by the US government and those inside the DEA that the family was grossing close to 7 billion dollars a year from the distribution of Cocaine Guns and other illegal courier services the men offered. In late 2014 Uncle Timo asked Pacho to head to Serbia to explore some ways to distribute contraband into mainland Europe and the Nordic regions of Europe. Pacho was excited for the new challenge even if he hated the cold. It was best to keep expanding the family's network and opportunities. He flew back and forth to Columbia many times as he slowly built up his own network of corrupt government officials' smugglers and handlers in the region.

Pacho found himself in the northernmost regions of Norway and Finn-mark in late 2019 exploring routes for boats and or seaplanes to allow distribution from the coast and trickled down into the main areas of Europe. He was staying in a hotel in a city called Nyheim when a forced and mandatory lockdown had come about, and he found himself trapped in the region. Time passed quickly and things got violent quickly after forced testing had been mandated and some weird aerosol spray had been deployed Pacho had said fuck that! Pacho was able to escape the confines of his locked-down hotel and met up with some of his contacts around the region as he worked to get the lay of the land and started building a network of people to exploit and manipulate as was his specialty. He worked tirelessly to begin turning a profit in the form of guns, narcotics, liquor, and humans. His looks and charm were second to none and it made his life in Nyheim more comfortable than he had thought he now works to secure his freedom from the region and make his way back to South America by any means necessary. 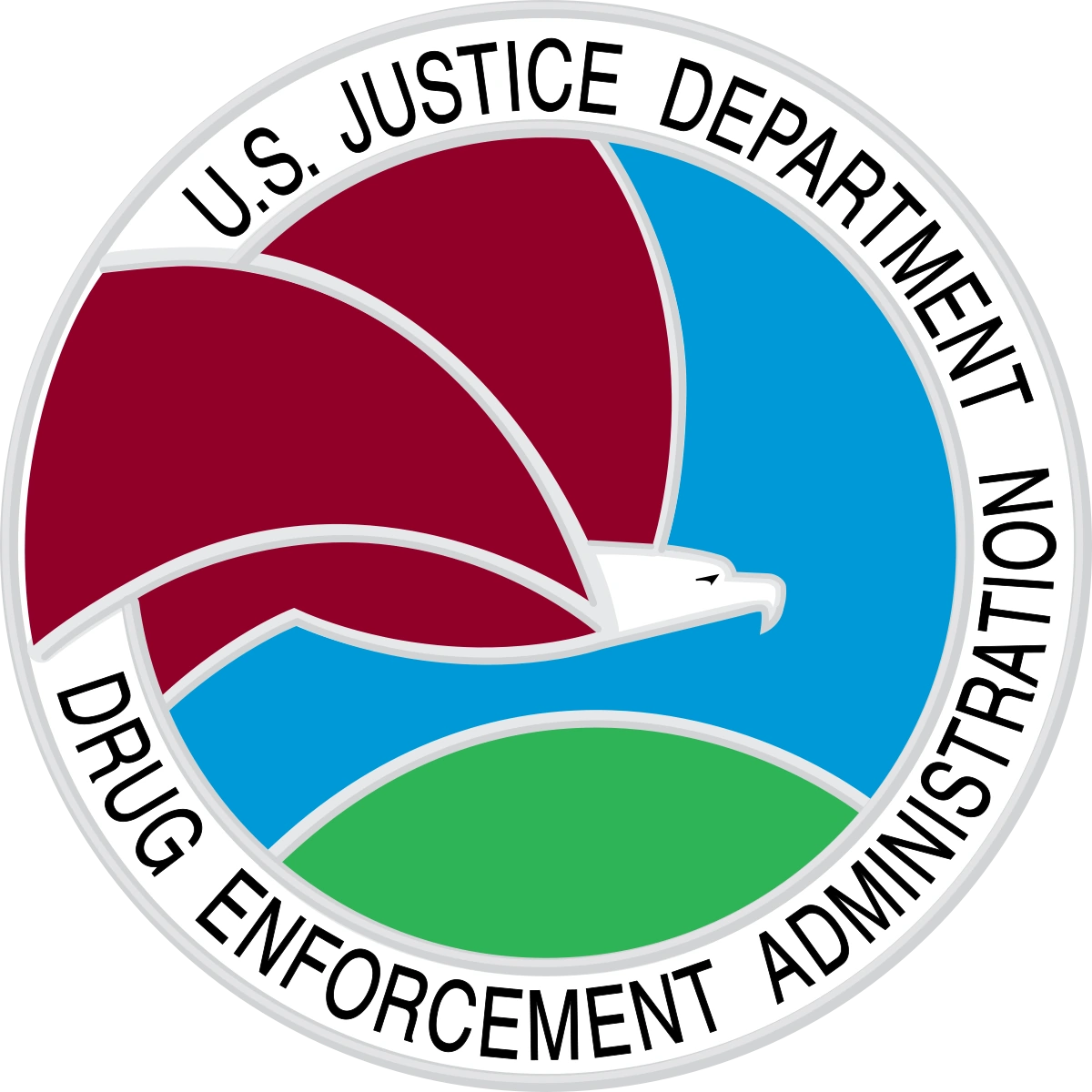