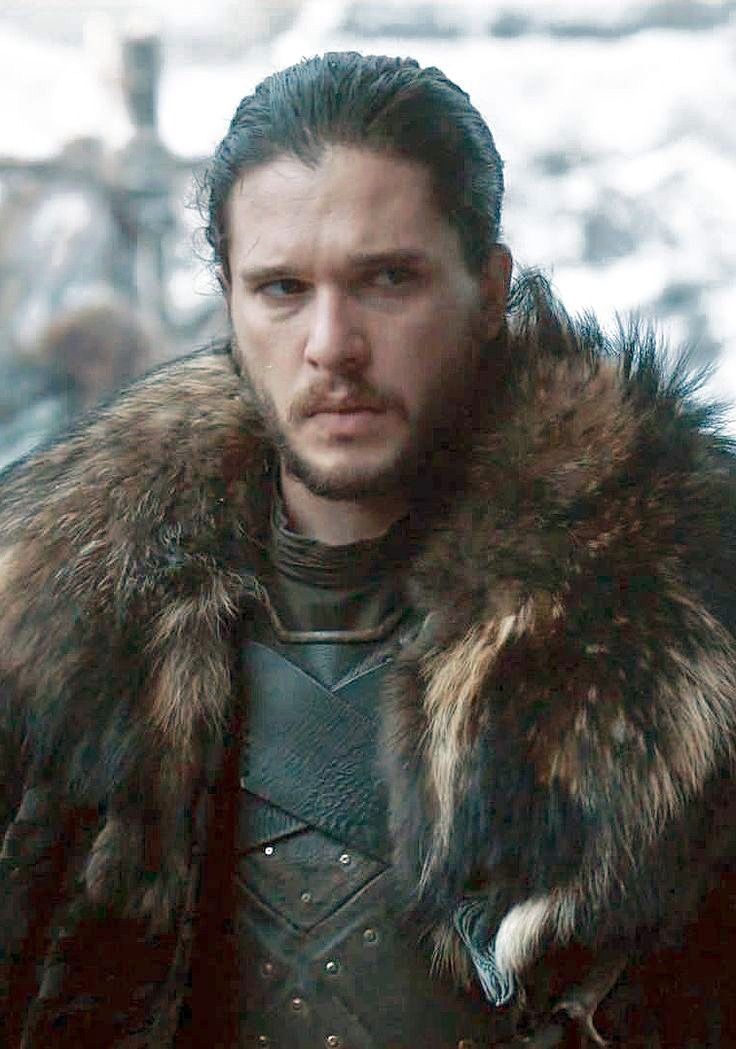 Jonh born Aegon Targaryen, is the son of Lyanna Stark and Rhaegar Targaryen, the late Prince of Dragonstone. From infancy, Jon is presented as the bastard son of Lord Eddard Stark, Lyanna's brother, and raised alongside Eddard's lawful children at Winterfell. Jon's true parentage is kept secret from everyone, including Jon himself, in order to protect him from those that sought the complete annihilation of House Targaryen.
Jon joins the Night's Watch and is later elected as Lord Commander. As a result of several controversial decisions, such as allowing the wildlings to settle south of the Wall, Jon is murdered in a mutiny, but is resurrected by Melisandre.
Freed from his Night's Watch vows, Jon and his half-sister Sansa Stark retake Winterfell from House Bolton, restoring House Stark's dominion over the North. Jon is declared King in the North.
Jon negotiates with Daenerys Targaryen for an alliance against the White Walkers in the imminent Great War. Later he pledges himself and his army to Daenerys, whom he falls in love with, subsequently abdicating his throne and being named Warden of the North.[2]
Later, Jon learns his true lineage from Samwell Tarly, revealing Daenerys is his aunt. A dragonrider whose dragon was Rhaegal, he fights in the Battle of Winterfell, during which the Night King is defeated and the return of the Long Night is prevented. Afterwards, Jon aids Daenerys in her resumed campaign to take the Iron Throne and participates in the Battle of King's Landing. However, when Daenerys lays waste to a surrendered King's Landing, Jon tries but is unable to dissuade her from more destruction and assassinates her to prevent further carnage.
Following the Great Council of 305 AC, Jon is sent into exile, returning to the Night's Watch. He leads the remaining Free Folk to settle in the thawing free lands.