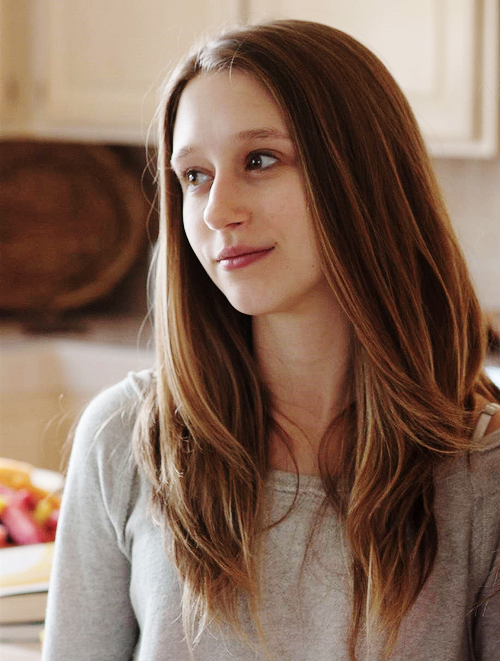 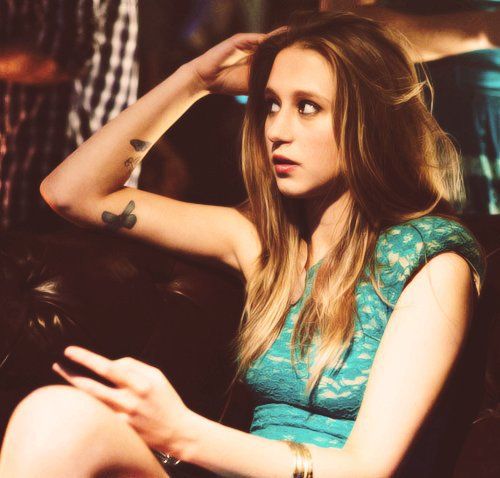 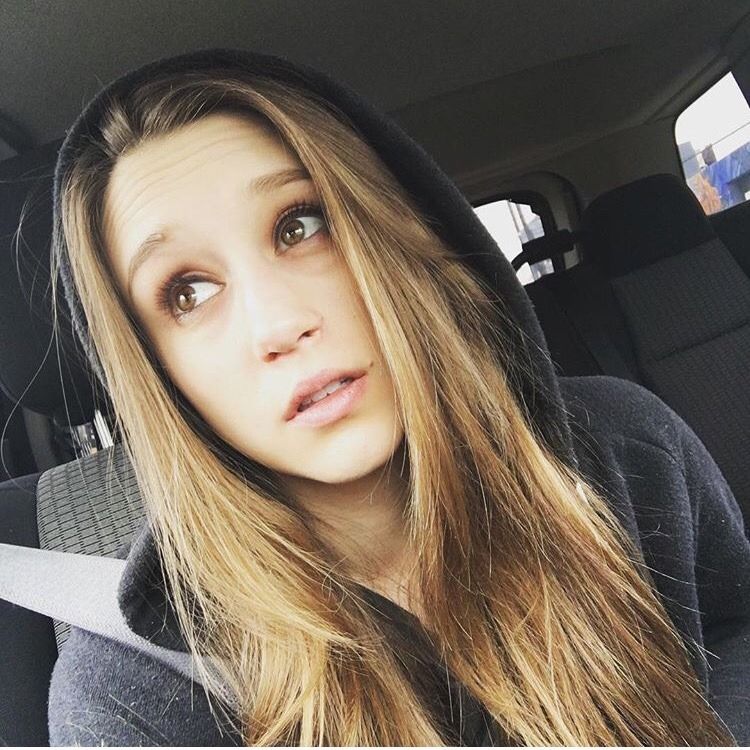 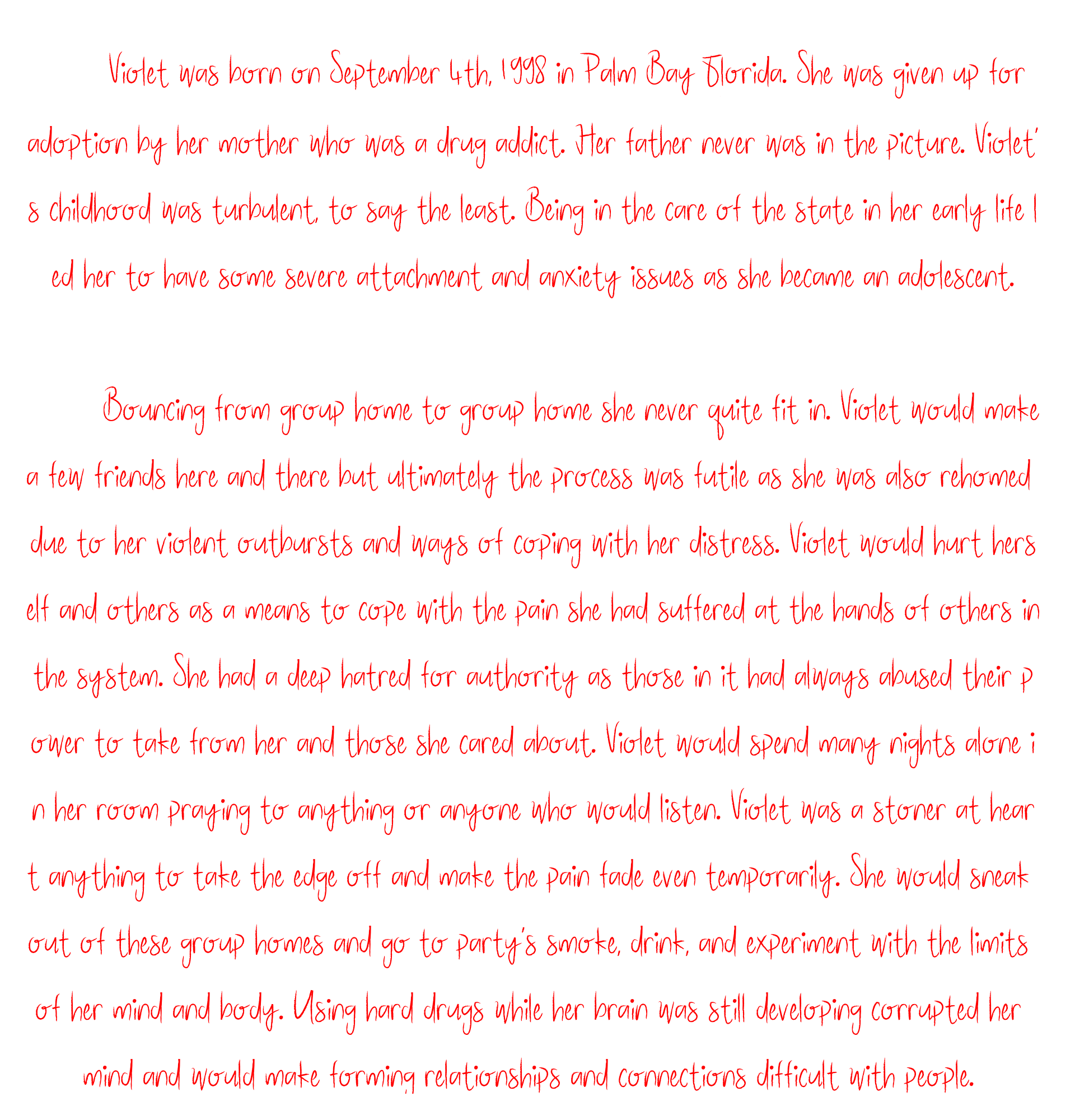 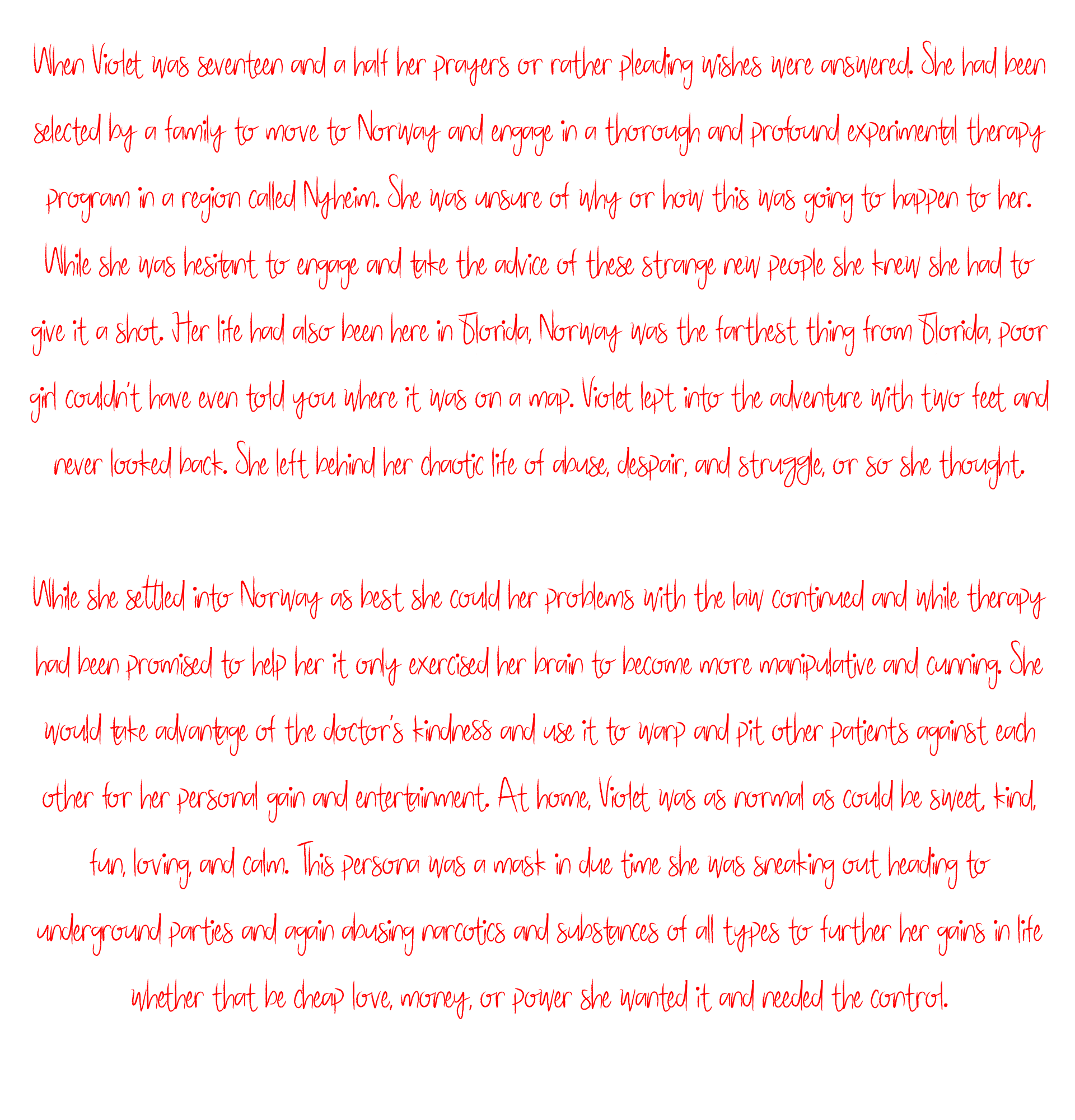 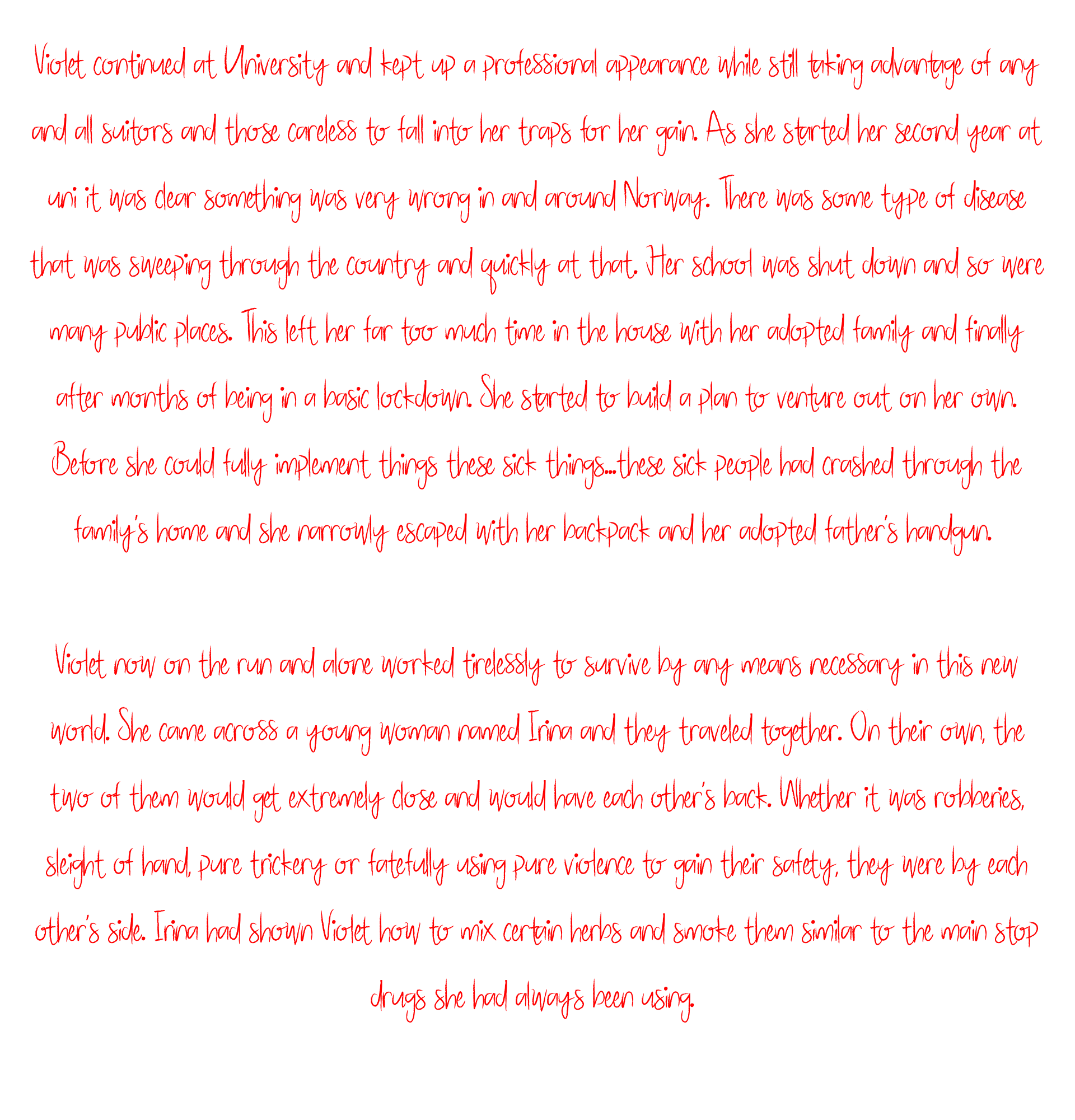 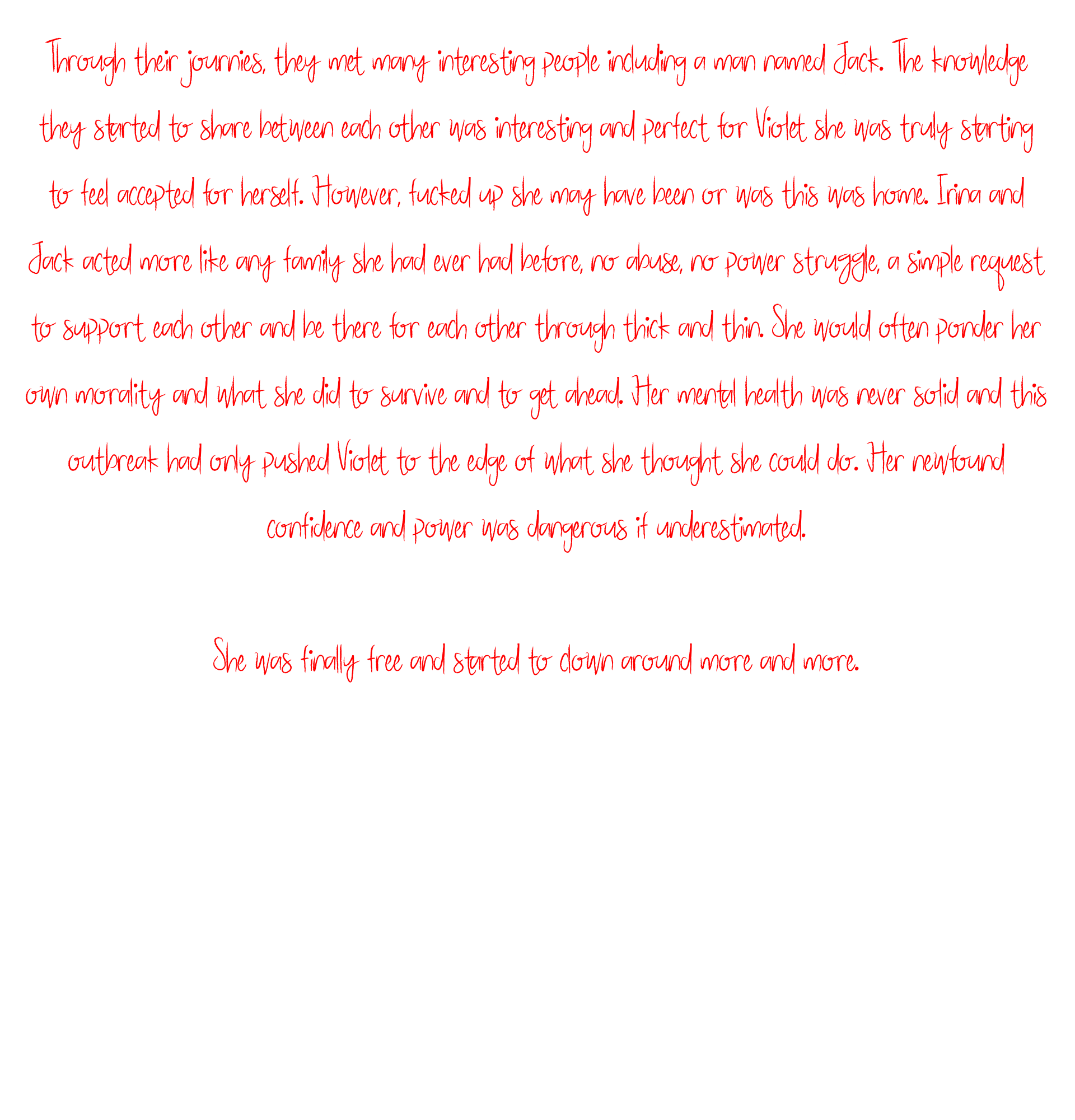 Violet was born on September 4th, 1998 in Palm Bay Florida. She was given up for adoption by her mother who was a drug addict. Her father never was in the picture. Violet's childhood was turbulent, to say the least. Being in the care of the state in her early life led her to have some severe attachment and anxiety issues as she became an adolescent.

Bouncing from group home to group home she never quite fit in. Violet would make a few friends here and there but ultimately the process was futile as she was also rehomed due to her violent outbursts and ways of coping with her distress. Violet would hurt herself and others as a means to cope with the pain she had suffered at the hands of others in the system. She had a deep hatred for authority as those in it had always abused their power to take from her and those she cared about. Violet would spend many nights alone in her room praying to anything or anyone who would listen. Violet was a stoner at heart anything to take the edge off and make the pain fade even temporarily. She would sneak out of these group homes and go to party's smoke, drink, and experiment with the limits of her mind and body. Using hard drugs while her brain was still developing corrupted her mind and would make forming relationships and connections difficult with people.

When Violet was seventeen and a half her prayers or rather pleading wishes were answered. She had been selected by a family to move to Norway and engage in a thorough and profound experimental therapy program in a region called Nyheim. She was unsure of why or how this was going to happen to her. While she was hesitant to engage and take the advice of these strange new people she knew she had to give it a shot. Her life had also been here in Florida, Norway was the farthest thing from Florida, poor girl couldn't have even told you where it was on a map. Violet lept into the adventure with two feet and never looked back. She left behind her chaotic life of abuse, despair, and struggle, or so she thought.

While she settled into Norway as best she could her problems with the law continued and while therapy had been promised to help her it only exercised her brain to become more manipulative and cunning. She would take advantage of the doctor's kindness and use it to warp and pit other patients against each other for her personal gain and entertainment. At home, Violet was as normal as could be sweet, kind, fun, loving, and calm. This persona was a mask in due time she was sneaking out heading to underground parties and again abusing narcotics and substances of all types to further her gains in life whether that be cheap love, money, or power she wanted it and needed the control.

Violet continued at University and kept up a professional appearance while still taking advantage of any and all suitors and those careless to fall into her traps for her gain. As she started her second year at uni it was clear something was very wrong in and around Norway. There was some type of disease that was sweeping through the country and quickly at that. Her school was shut down and so were many public places. This left her far too much time in the house with her adopted family and finally after months of being in a basic lockdown. She started to build a plan to venture out on her own. Before she could fully implement things these sick things...these sick people had crashed through the family's home and she narrowly escaped with her backpack and her adopted father's handgun.

Violet now on the run and alone worked tirelessly to survive by any means necessary in this new world. She came across a young woman named Irina and they traveled together. On their own, the two of them would get extremely close and would have each other's back. Whether it was robberies, sleight of hand, pure trickery or fatefully using pure violence to gain their safety, they were by each other's side. Irina had shown Violet how to mix certain herbs and smoke them similar to the main stop drugs she had always been using.


Through their journies, they met many interesting people including a man named Jack. The knowledge they started to share between each other was interesting and perfect for Violet she was truly starting to feel accepted for herself. However, fucked up she may have been or was this was home. Irina and Jack acted more like any family she had ever had before, no abuse, no power struggle, a simple request to support each other and be there for each other through thick and thin. She would often ponder her own morality and what she did to survive and to get ahead. Her mental health was never solid and this outbreak had only pushed Violet to the edge of what she thought she could do. Her newfound confidence and power was dangerous if underestimated.

She was finally free and started to clown around more and more.